How this man is using video games to help refugees

Twenty-four laws passed by the National Assembly without the input of the Senate have been declared unconstitutional by the High Court.
Read more
Security

According to a letter seen by NCMP from the office of SSPDF Spokesman dated October 29th, the letter stated that on October...
Read more

Lual Mayen’s home work station is something akin to what you might see in a TV control room or a NASA command center. Surrounded by computer monitors, laptops, and tablets, Mayen is putting the finishing touches on a video game that he’s been thinking about for years. It’s a lifelong dream for Mayen, a dream so big that sometimes he’s worried he might still be sleeping.”Sometimes I feel like this is not real.

I feel like something might happen and I might find myself where I was yesterday.” For a person in his mid-twenties, Mayen does not have the typical upbringing one would imagine for a modern-day video game designer. He grew up in a place where every day was a struggle for survival.Mayen is a refugee from South Sudan who was born in the midst of his family’s search for safety.

“It was not an easy journey for my family. They were seeing their belongings being taken, people being killed on the way. Sometimes there was no food, no water to drink. During the journey, I lost two of my sisters.”

There was no school, food wasn’t always available and as Mayen says, “All you do is try to survive.” As a boy, he remembers watching his friend fall to his death while trying to get something to eat from a mango tree. Yet two days later, pushed by hunger, Mayen returned to the tree in search of food. 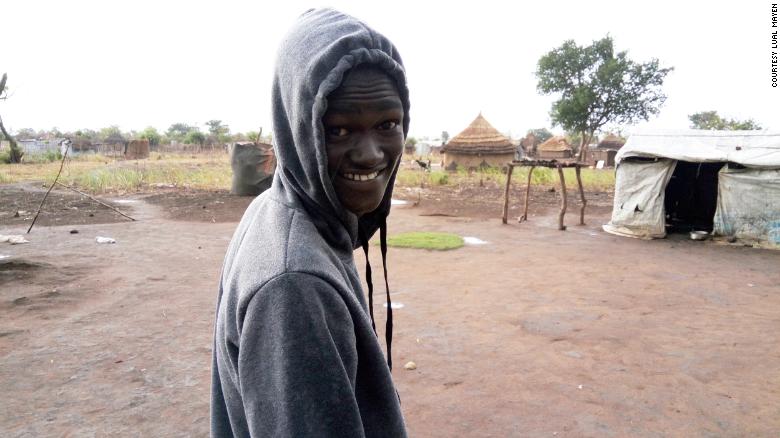 Lual Mayen in a refugee camp in Northern Uganda.

It wasn’t until 2007, when Mayen was around 15 years old, that he saw something that would change his life.”I first saw a computer in 2007 at a refugee registration,” said Mayen, “and I was like, ‘Wow, what is that?'”Mayen asked his mother for a computer. But the family had very little money, so he soon forgot about his request. For the next three years, however, his mother worked, secretly saving up $300 to surprise her son so he could buy a computer.

“I couldn’t believe that it was real. And then I was like, ‘So what can I do? Where can I even charge the computer? Where can I even go and learn?’ Because there was nobody that could train me.”I asked myself If my mother can save $300 for three years to be able to buy a computer, ‘How about me?’ If she was able to take us from a war-torn country to an environment of a refugee, I can also make it. It inspired me so much to start looking for ways to be able to utilize the product that my mother got for me.” 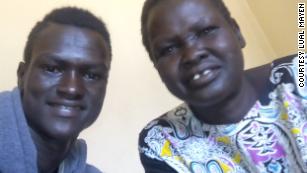 Lual and his mother, Nyantet Machot.The nearest spot for Mayen to charge his computer was a UN basecamp three hour’s walk from his camp. The trek became a daily ritual: walk three hours to the basecamp, charge his computer and download tutorials to teach himself how to use it, then walk three hours back. During one of his computer charging trips, a friend of Mayen’s introduced him to a new virtual pastime — the video game. “I came back home, I opened my laptop and the first thing I saw was the icon for “Grand Theft Auto: Vice City.” I opened it and I was like, ‘Wow, what is this?'” It was the first time he ever played a video game. The game’s story and play involve violent situations, including scenes where characters must run for their lives.

For Mayen and many refugees, it was something they had actually lived through. Playing the game made him wonder about the possibilities of video games.”If kids in my country start playing this game, they will feel like that’s how things are done. But I realized games are so powerful. When you’re playing a game, you’re actually putting yourself in the shoes of somebody,” said Mayen. That inspired him to ask himself: How could he create a video game for peace and conflict resolution? Fuelled by that question, Mayen began his mission to teach himself through tutorials on how to code, design, and create his own video game from scratch. Within 6 months, he had a basic version of a game that he could share with other people in the refugee community over Bluetooth. But once he realized that he could reach more people by posting his game on Facebook, it took off.”People starting downloading the game and started sharing it. That was the first time I started connecting with the video game community and getting support.” 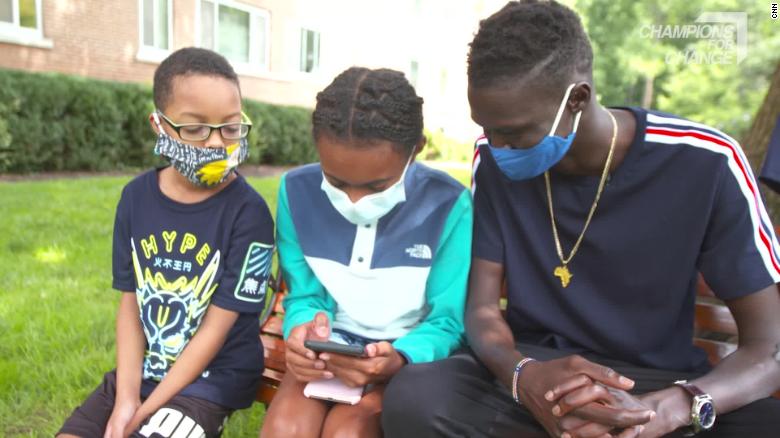 Mayen teaching kids in Washington, D.C., how to play his game “Salaam.”Mayen was invited to South Africa to speak with other game designers and industry insiders about how he made a game from his refugee camp, a game that promotes peace. Then from there, he was invited to the Game Developers Conference in San Francisco. “That’s how everything changed my life, and I was able to start a new life.”

Mayen, now located in Washington, D.C., is CEO and founder of Junub Games. The company is getting ready to officially release its marquee product, “Salaam,” as an instant mobile game. “Salaam” is a “high-tension runner game” that puts the player in the shoes of a refugee. The character is running from people trying to shoot and capture them and the players need to keep their characters alive by getting them food, water, and medicine and eventually lead them to safe ground.

What makes “Salaam” (an Arabic word that means peace) more than just a game is Mayen’s plan to partner with non-profits so that when players buy food, water, and medicine in the game, they are actually buying those items for people in refugee camps. Chris Boian with the office of the UN’s High Commissioner for Refugees says, “What Lual’s game does is it provides people engaging in that game an opportunity to contribute actual relief and assistance to refugees.” It’s really a game-changer,” said Boian. Mayen hopes that “Salaam” provides an empowering message to not only its players but those he’s trying to help. “You don’t have to be a charity to change the world. You can be an individual who is actually playing a video game, and you’re helping somebody in a refugee camp,” said Mayen. “I want other refugees to understand that we’re not here just to survive. We are also here to thrive.”

Nova Stevens is a model, actress and beauty queen who is 6’0″ tall. Hailing from Canada, she is South Sudanese and she speaks...
Read more
Entertainment

Twenty-four laws passed by the National Assembly without the input of the Senate have been declared unconstitutional by the High Court.
Read more
Security

According to a letter seen by NCMP from the office of SSPDF Spokesman dated October 29th, the letter stated that on October...
Read more
Legal Analysis

DEATH BY HANGING: IS THERE NEED TO REFORM SOUTH SUDAN’S DEATH PENALTY LAW?

The imposition of death penalty as punishment for a variety of crimes dates as far back as the Eighteenth-Century B.C and since...
Read more