“What was the point of independence if we are still destitute and in chaos?” a woman from Duk county in Jonglei state,...
Read more
INDEPENDENCE

His Excellency, Good evening fellow citizens. I come before you this evening to wish you...
Read more
INDEPENDENCE

With schools closed, child labour on the rise in lockdown Uganda

Every morning soon after dawn, 10-year-old Moses leaves home carrying trays of hard-boiled eggs and walks for half an hour to sell...
Read more

Two Ugandan students killed two birds with one stone. They actually process plastic waste into building materials, but they have changed their production due to Covid-19 to address the lack of medical protective equipment (PPE) in hospitals. In addition, they create new jobs and in the region plastic waste is collected diligently, which in turn is produced for PPE face protection for hospitals. Did you know that 91% of the world’s plastic is not recycled? Around 1,000,000 plastic bottles are bought every minute. Last year, Coca Cola announced it had made three million tons of plastic packaging or 200,000 bottles per minute. Research has shown that Coca-Cola products the most commonly disposed plastic bottles in the world are followed by Nestle and Pepsico. It is said that recycling plastic would not be worth it, but these students from Uganda have shown that it is worth it! Great action that even helps people. 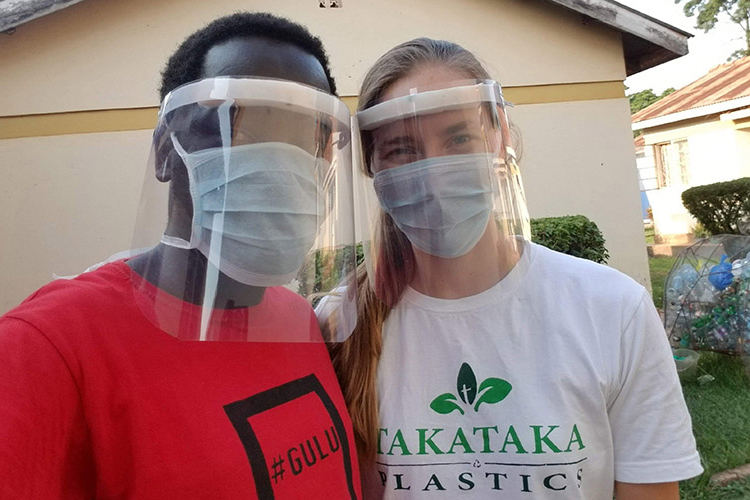 During the COVID-19 crisis, Takataka Plastics shifted its focus to manufacturing PPE from local materials to provide frontline health workers with the protection they needed.

After the government in Uganda ordered all nonessential businesses to close, Peter Okwoko and his colleague Paige Balcom, co-founder of Takataka Plastics, continued to work in their plastic processing plant. But instead of making things like roof tiles or paving stones out of recycled plastic, they started making face shields for medical personnel.

After the couple posted a picture of their prototype on social media, they received a surprising call from a regional hospital, who ordered 10, because face protection is also in short supply in Uganda. The hospital was so enthusiastic that they ordered more straight away.

In Uganda, medical personnel even threatened to boycott work to protest the lack of protective equipment in hospitals, especially after it was confirmed that several health workers had been infected with the virus.

“The situation is critical. Many people work without PPE, ” warned Dr. Mukuzi Muhereza, general secretary of health workers in the country, the Uganda Medical Association. “This is hampering the fight against COVID-19 because healthcare workers fear to become themselves a COVID patient every time they touch a patient,” he told Reuters.

As of June 28, 2020, 833 cases of Covid-19 were registered in Uganda. Experts disagree about how bad the corona pandemic will be in Africa. But the virus has also arrived in Uganda, so the country has to prepare for a pandemic.

Meanwhile, Peter Okwoko and Paige Balcom from  Takataka Plastics have 14 employees, six of whom were homeless and unemployed. On June 24, 2020, they announced that they had already made 1200  face shields from recycled plastic. 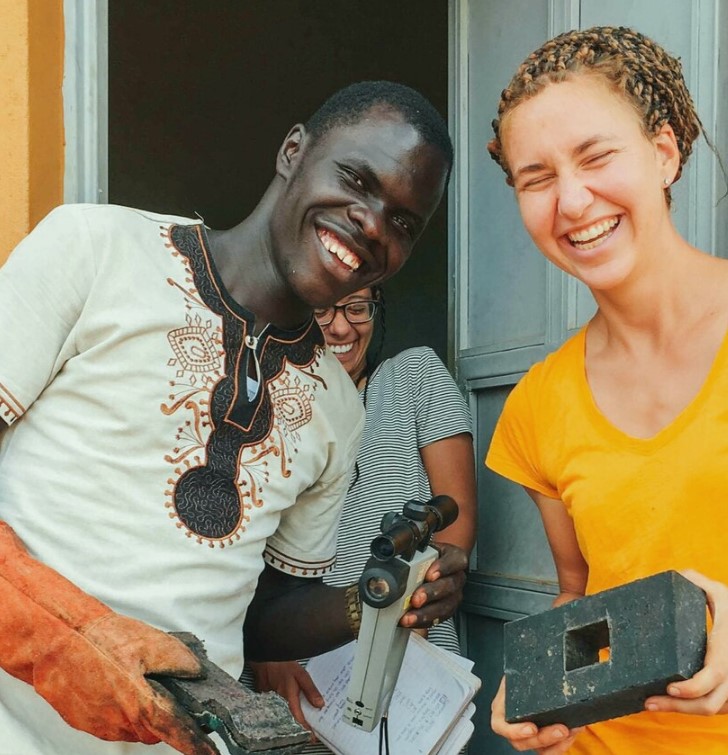 Paige comes from New Hampshire and is a PhD student in mechanical engineering at the University of California at Berkeley with a focus on heat transfer and development technology. She has a deep passion for using technology to improve people’s lives in developing countries. After living in a Ugandan village for a year, Paige fell in love with Uganda’s people and culture and now sees Gulu as her second home. She has received several grants for college graduates, including grants from the National Science Foundation, UC Berkeley, USAID, and the Institute for International Education. 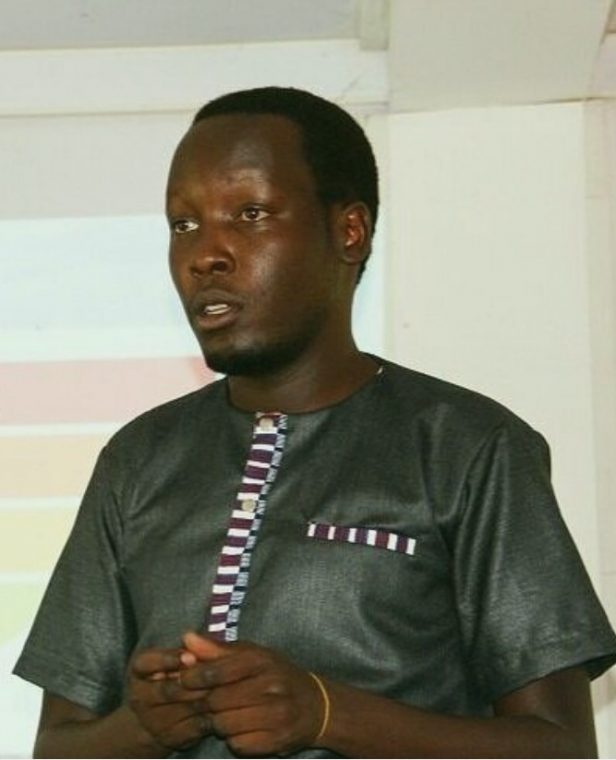 Peter is a graduate of Aalborg University, Denmark’s program for innovative communication technologies and entrepreneurship. His passion is creating opportunities for disadvantaged people in his community and educating community members about protecting the environment. He is the founder of AfriGreen Sustain, a social enterprise for waste management in Gulu. He is also a co-founder of Hashtag Gulu, a nonprofit that works with children and young adults who live and work on the streets of Gulu. Peter has been working in Gulu for 6 years.

Paige met Peter through his engagement at AfriGreen and founded Takataka Plastics, a small plastics collection center, in 2019. They built the first machines as prototypes and made wall tiles from recycled plastic, with success because they not only created jobs, but also a cleaner, healthier environment in Gulu. Gulu is a city in northwestern Uganda with approximately 150,000 inhabitants.

Gulu women got employed by the community to sweep the streets of the village and collect plastic waste every morning. The plastic waste is then processed at Takataka Plastics. In addition, they now get part of the material used in the face shields from hospital waste, for example from used intravenous dropper bottles.

To make the face shields: a two day process – sorting, cleaning, crushing, melting, then molding the face shields. You attach an adjustable belt, which is also made of recycled material. 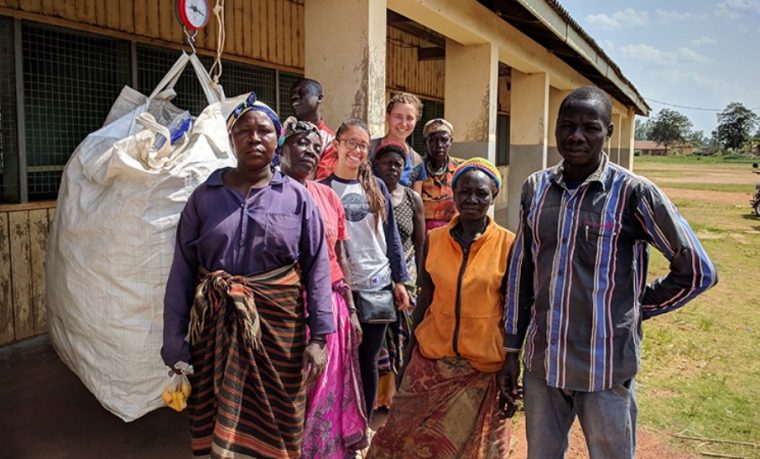 Ugandan women from Gulu who have found employment through Takataka Plastics

Around 500 of the shields were sold at low prices to NGOs and privately run health facilities, the other 700 were donated to public hospitals.

Takataka hopes to build on the success of the face shields and expand them to a more suitable plastic processing and recycling facility. At present, their location can process around 60 kg of plastic per day, but they are aiming for a monthly capacity of 9 tons.

Hundreds of tons of plastic are thrown away every year in Uganda, and their innovative solution to the PSA crisis has made this entrepreneur have bigger dreams.

Plastic that is disposed of worldwide every year is enough to circumnavigate the globe four times. A plastic bottle takes 450 years in the sea to decompose. 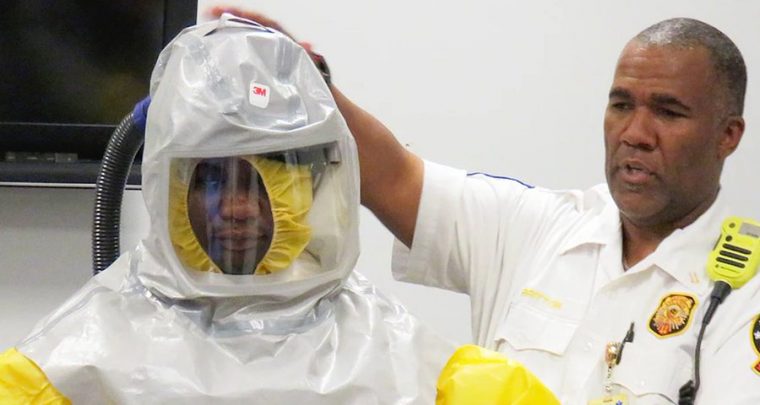 Killing two birds with one stone, two Ugandan entrepreneurs working to up-cycle plastic waste into building materials have altered their production to tackle the shortages of personal protective medical equipment (PPE) in hospitals dealing with the country’s COVID-19 patients .

After the government ordered all non-essential businesses closed, Peter Okwoko and his colleague Paige Balcom, co-founders of Takataka Plastics, continued working in their plastics processing facility.

But, instead of things like roof tiles, they started recycling plastic waste into face shields for medical workers.

After posting an image of their prototype on social media, the pair got a surprising call from a regional hospital asking for 10 face shields because they didn’t have enough.

Using locally-sourced molds for molten plastic, the two finished the order and delivered them, before getting a call later in the afternoon from the very same hospital asking for more because “the first ones worked out so well for them,” Okwoko, 29 ,  told Reuters .

PPE shortages have occurred world-wide, and Ugandan hospitals are no exception, but Takataka Plastics has, so far, made 1,200 face shields. Even more inspiring, the company’s staff of 14, includes six employees who were homeless, jobless youth.

Around 500 of the shields have been sold to NGOs and privately-managed health facilities at a low cost and the other 700 were donated to public hospitals.

Takataka hopes to build upon the success of the face shields and expand its operations into a more appropriate plastic processing and recycling facility. Currently their location can reduce around 132 pounds (60 kgs) of plastic per-day, but they are aiming to establish a monthly capacity of 9 metric tons.

Uganda sees hundreds of tons of plastic thrown away annually, and their innovative solution to the PPE crisis has pushed these entrepreneurs to dream bigger.

ANKARA A medical laboratory team in Uganda tasked with conducting coronavirus tests started a strike over non-payment of their...
Read more
COVID-19

Kenyan schools will only reopen in January 2021

The country says the 2020 school year will be considered lost due to Covid-19 Schools in Kenya will reopen...
Read more
Economics

Reports from Kenya indicate that more than 2,162 products are at risk of losing their market protection following the expiry of their...
Read more

“What was the point of independence if we are still destitute and in chaos?” a woman from Duk county in Jonglei state,...
Read more
INDEPENDENCE

His Excellency, Good evening fellow citizens. I come before you this evening to wish you...
Read more
INDEPENDENCE

With schools closed, child labour on the rise in lockdown Uganda

Every morning soon after dawn, 10-year-old Moses leaves home carrying trays of hard-boiled eggs and walks for half an hour to sell...
Read more
INDEPENDENCE

How did the crisis in South Sudan start?

Akot Deng Ngongdit - South Sudan legitimately attained her independence from Sudan in July/09/2011, but the hard-won celebration was short-lived, and entered...
Read more