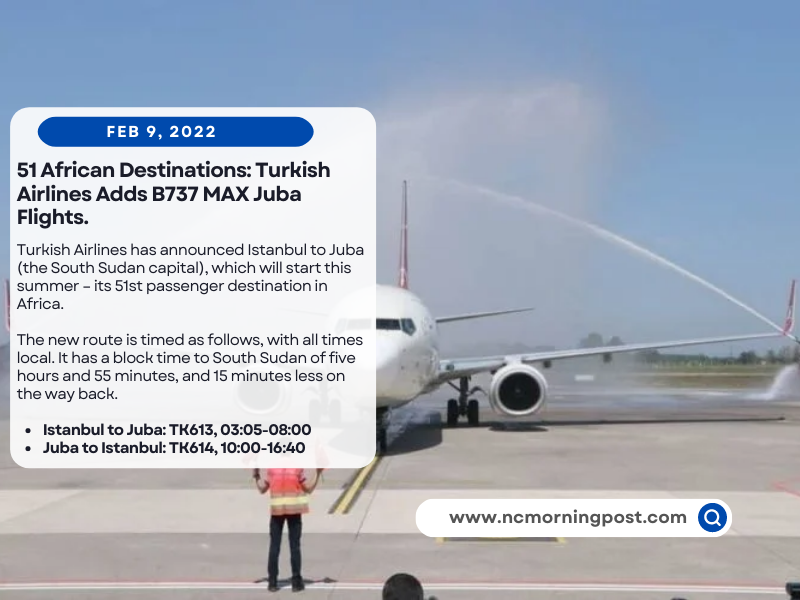 Turkish Airlines has announced Istanbul to Juba (the South Sudan capital), which will start this summer – its 51st passenger destination in Africa.

Turkish Airlines’ latest development in Africa comes about a month after it completed its technical review at Juba International Airport. However, it’s not the first time Istanbul-Juba was planned, with a three-times-weekly service via Entebbe previously expected to start in 2016 – before the new terminal was created.

Turkish Airlines will begin the 2,512-mile (4,042km) link to Juba on June 1st. It’ll operate on Mondays, Wednesdays, and Fridays using 151-seat B737 MAX 8s. These have 16 seats in business and 135 in economy. For instance, unlike many of Turkish Airlines’ Africa routes, which are one-stop, the relatively low level of capacity partly explains why it’s a “termination” service, for instance, only operating to/from Juba.

The new route is timed as follows, with all times local. It has a block time to South Sudan of five hours and 55 minutes, and 15 minutes less on the way back.

You’d expect the timings to be about connectivity over Istanbul, and Juba is no exception. As Turkish Airlines’ main departure time to Africa is between 01:00 and 01:59, departing at 03:05 is quite late.

Most passengers use Ethiopian Airlines

Not helped by the long-lasting civil war, there was relatively little traffic in 2019 between Europe/North America and South Sudan. According to booking data, it involved approximately 35,000 round-trip passengers, about six in ten of whom traveled to/from Western Europe. Although not a fair comparison, that was slightly more than flew between Manchester and Kuwait.

A large chunk of the 35,000 passengers transited thru Addis Ababa with Ethiopian Airlines. EgyptAir via Cairo and flydubai (and Emirates) via Dubai had significantly smaller shares. As Enes Salam, Turkish Airlines’ deputy manager in Juba, recently said, “The [South Sudan] government will continue partnering with Turkish Airlines… to achieve development goals.”

The ten largest origins and destinations in 2019 were as follows, with some evidence of peacekeeping demand, such as the strong position of Geneva, and visiting friends and relatives demand. It’ll be fascinating to see how passenger traffic evolves and develops in the coming years, with large volumes of South Sudanese diaspora globally.

Most of the European destinations above have two-way connectivity over Istanbul to Juba, although they aren’t yet bookable to South Sudan when searching. Notably, there will be only one stop en route, not two as is common with Ethiopian Airlines. 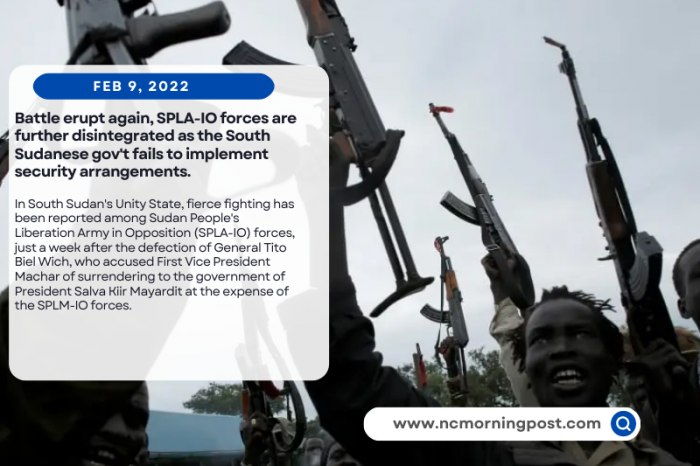 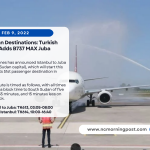