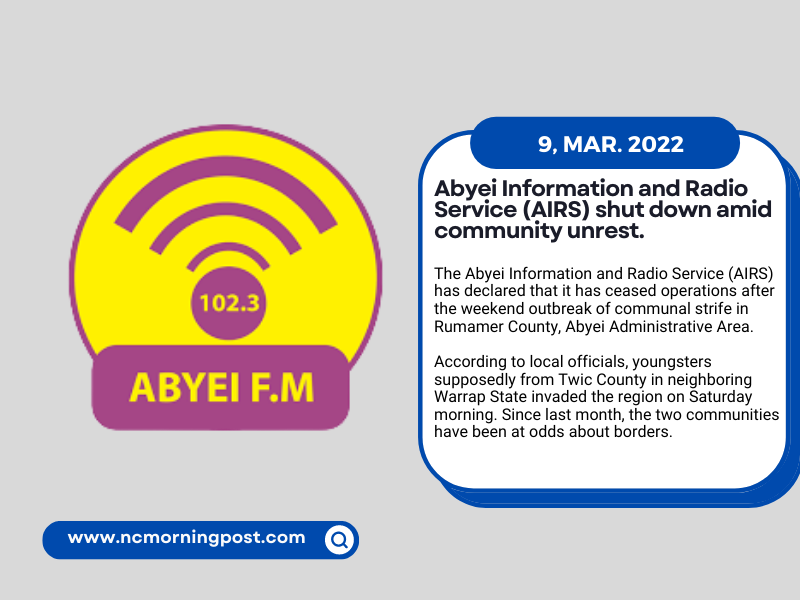 The Abyei Information and Radio Service (AIRS) has declared that it has ceased operations after the weekend outbreak of communal strife in Rumamer County, Abyei Administrative Area.

According to local officials, youngsters supposedly from Twic County in neighboring Warrap State invaded the region on Saturday morning. Since last month, the two communities have been at odds about borders.

According to a Radio Tamazuj report obtained by NCMP, Karbino Dut Aguek, the Managing Director of Abyei FM 102.3, said that his station went off-air on Saturday due to community unrest.

“The radio station ceased operations on Saturday for security concerns owing to the deterioration of the situation. As you are aware, combat was taking place inside the town and adjacent villages “Dut said.

Dut said that the station would stay off-air until the security situation improves.

He went on to say that some radio equipment and journalists had been evacuated to Abyei Town.

In recent days, the oil-rich disputed area of Abyei has come under siege from its northern neighbors Twic and Misseriya. Leaders and the general public have urged for immediate action to halt the killing and damage of property. 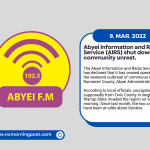