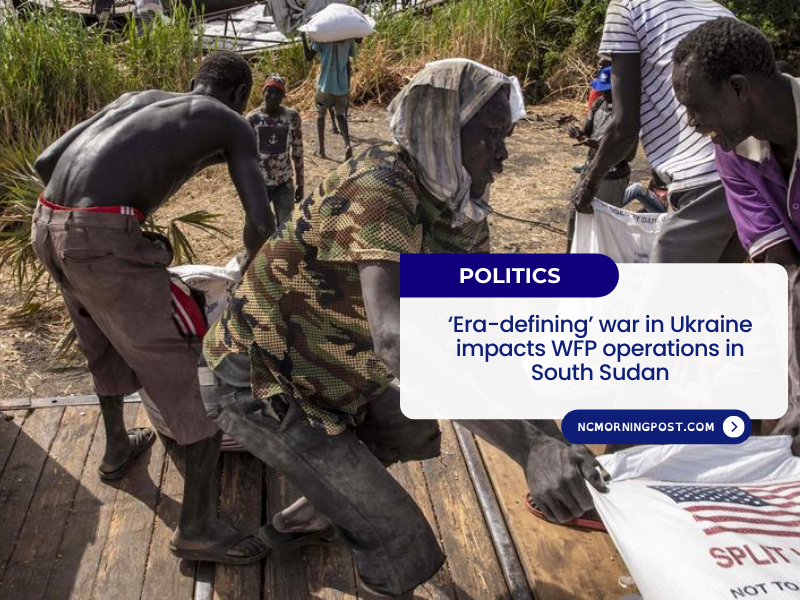 Pockets of catastrophic hunger, officially famine, are already present in eight sites in the nation, while fighting has stopped the UN agency from routinely accessing another region where people were already going hungry last year.

South Sudan is now experiencing the fourth year of catastrophic floods that has displaced hundreds of thousands of people and triggered confrontations between agricultural and herding groups.

Matthew Hollingworth, WFP Country Director in South Sudan, talked to UN News about how the consequences from what he termed the “era-defining” battle in Ukraine is being felt thousands of kilometers away.

He cautioned that WFP would have to make “tough choices” this year, including prioritizing assistance distribution to just the most needy.

More than 10 years after South Sudan earned independence, the nation cannot afford to fail, Mr. Hollingworth said, but adding that what is required above all is peace.

This interview has been edited and shortened for publication.

Matthew Hollingworth: The entire number of people requiring any type of humanitarian aid right now this year in South Sudan is 8.9 million, one of the biggest people-in-need estimates that we’ve ever had.

Of them, based on the current food security Integrated Phase Classification (IPC) – the key evaluation that we use to look at food insecurity in a nation – there are 7.74 million people who will experience severe levels of acute food insecurity this lean season, so from April to July.

That’s 63 percent of the population of this nation. Those are some of the worst numbers we’ve ever seen, definitely since this nation was formed as an independent state in 2011.

What’s caused it, or what is causing it, is the level of violence that this nation still witnesses everyday and the accumulation of that violence over many years.

We have experienced three years of extraordinary floods, and we’re headed into the fourth year.

Agriculturalists and pastoralists who have thrived, lived, and maintained themselves via the same agricultural responsibilities for centuries, can no longer do so since their land has altered permanently. It’s currently submerged.

And, of course, in a nation like South Sudan, when you speak about displacement, that displacement then has an influence on stability and peace. So, we have problems of violence and conflict produced because, for example, pastoralists and their animals have been moved into land where other people reside or have lived.

We’ve also seen enormous cost rises on commodities over the past three years mostly because of COVID, and what COVID caused to supply chains. More lately, we’ve witnessed gasoline prices rise, which has an influence on the cost of food.

And the final aspect of course is that yeah, the conflict in Ukraine and what it is doing to food prices and fuel shortages internationally, and how that effects the South Sudanese.

UN News: Let’s get into that because there are so many levels to what is occurring in South Sudan. Ukraine is thousands of kilometers away, yet the UN and WFP have been speaking about the fallouts hurting particular nations and peoples.

Who means so many nations that depend on importing grains from Russia and Ukraine that if that flow of a crucial food product is damaged in any way, it has a big effect on what is generally a mainstay of diets around the globe? In South Sudan, that is not the core of the diet. It’s sorghum or maize, an important cereal.

But we are surrounded by nations that depend on wheat. And if wheat prices go up, and if wheat availability goes down, the price of sorghum and maize goes up as a ripple effect of what’s occurring in Ukraine.

We’re already witnessing an increase in the price of sorghum and maize throughout the nation. We’re witnessing an unusually large growth in vegetable oil, roughly 15 percent, since the beginning of the year.

And again, South Sudan doesn’t necessarily consume the high-coast sunflower oil that is produced in Ukraine and is not being exported because of the crisis, as it typically would be.

But the vegetable oil here is still going up in price because, worldwide, there’s less available or there is a worry that there will be less available in the future.

The cost of petrol is rising and increasing. We’re already witnessing at least a $300,000 per month extra expense for aviation fuel.

On the gasoline that we use to drive trucks throughout the country– and the great bulk of what is moved for the humanitarian community is by truck – those rates have gone up by a million dollars a month.

If gasoline costs stay as they are today, it will be $8 million more expensive simply to drive trucks throughout the nation this year.

Matthew Hollingworth: Right now, we know we can’t. Even if those statistics seem huge, they are dwarfed by what we need to help those millions in South Sudan.

We are presently $600 million short on our initiatives for the next six months. There are so many big crises in the world today – Ukraine, Yemen, Afghanistan, in the eastern Horn of Africa due to drought, the Syrian refugee crisis, Ethiopia and the Tigray conflict, the position of the Sudanese in the north – all of these crises imply that donors do not have the resources to fulfill the enormity of the world’s humanitarian demands.

Ukraine is an era-defining crisis. It is, suffices it to say, going to have an influence everywhere. And one of those implications is humanitarian donors, Member States, and humanitarian organizations will not have the money to satisfy the magnitude of the needs that the world perceives.

And we will not satisfy the rising demands of other nations across the globe, including South Sudan, because of that immensity that Ukraine is making more tougher.

Matthew Hollingworth: We are calling on donors to recognize that first of all, this is still the youngest nation in the world, and it’s in a pretty fragile state.

We are approaching to the conclusion of what has been a very tough uncertain transitional era. We have a Transitional Government of National Unity brought together by the different parties that were battling one another off-and-on for the previous seven years.

That political arrangement might dissolve, and we’re approaching to its consummation. And what’s occurring as we near to the finish is this massive instability because we’re seeing poverty levels and humanitarian needs at levels never seen before.

So, on the one hand, we are saying to donors ‘let’s be conscious of the reality that this nation that was just truly founded 10 years ago is in a very perilous situation’.

What we can’t do is allow a humanitarian catastrophe in this nation put us back on the wrong track, and undermine the peace effort even worse. And remember, we’re witnessing war all the time today in South Sudan – 44,000 people were displaced last week due of fighting in Unity State alone.

We’re also having to make some unpleasant decisions. Eight months ago, we had to make that horrible choice to, as it were, take from the hungry to give to the starving.

We lowered the rations we were supplying to refugees from Sudan, the Democratic Republic of the Congo, and elsewhere, to boost rations in the regions where South Sudan was seeing the risk of famine. We can’t lower their rations any more. They only receive 50 percent.

That’s not enough in terms of supporting a healthy existence. It’s already delivering the very scrapings of the barrel, as it were, of what they need. But with tremendous requirements pending, what we need to do today is sadly focus just on the most vulnerable.

But it has an influence as well, because we are heading to the stage of electioneering, the politics that comes before an election. And if you don’t offer help in particular regions because their needs are fewer, it might be misunderstood politically.

Prioritizing will occur based on vulnerability assessments, but to individuals impacted, it might be interpreted as “why are they receiving and I am not getting?”

When you start having ‘us-and-them’ disputes about assistance, at a time of political instability, it’s a tricky formula, but it’s one we’re going to have to navigate very, very carefully through to ensure that the message is clear.

Matthew Hollingworth: One really crucial aspect is that in a nation like South Sudan, there are so many groups who live in genuine isolation. They have suffered that marginalization, that disenfranchisement, for decades and decades.

What we would prefer to be doing is helping those areas via genuine development investment.

To achieve that, there is one important item we need, and we haven’t got enough of. It’s not money; it’s tranquility. Because when you don’t have peace, you spend so much more money on reacting to the humanitarian crises and the humanitarian needs.

Whereas if there were peace, we should have already been phasing out humanitarian initiatives and just been witnessing development activities and really, just be passing over duties to government institutions.

But instead of that occurring, we still need to make those life-saving choices when we should simply be focused on life-changing activities, which we can’t.

With peace, we might be making a difference to ensuring that communities in South Sudan wouldn’t have to be worried about conflicts 7,000 kilometers away, and the effect of those wars on availability and access in their community, because they would be able to care for themselves.

They would be able to fulfil their own requirements. 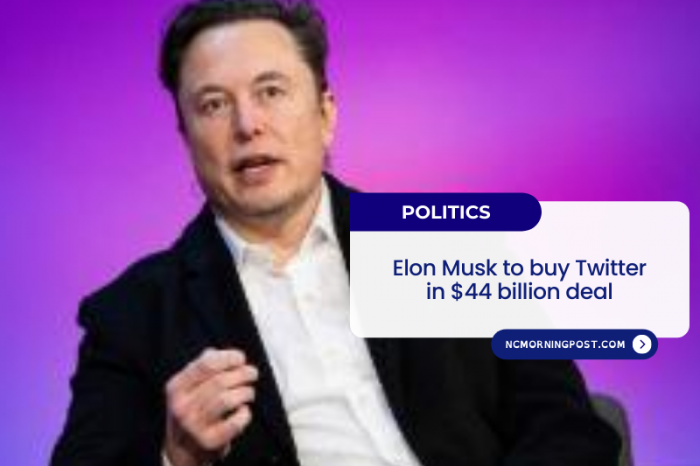 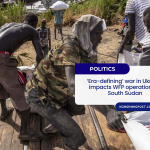