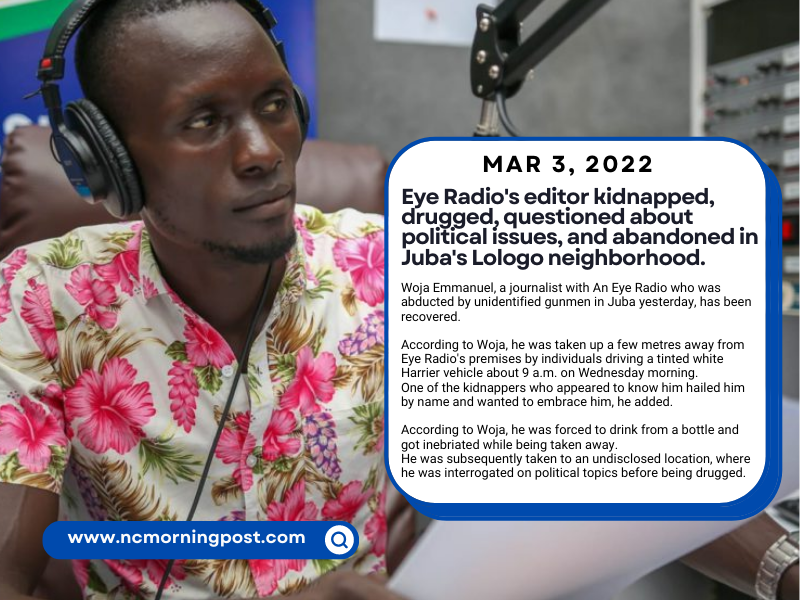 Woja Emmanuel, a journalist with An Eye Radio who was abducted by unidentified gunmen in Juba yesterday, has been recovered.

According to Woja, who spoke to Eye Radio in a report seen by NCMP, he was picked up a few meters away from Eye Radio’s premises by individuals driving a tinted white Harrier vehicle around 9 a.m. on Wednesday morning.

One of the kidnappers who appeared to know him hailed him by name and wanted to embrace him, he added.

Woja said that before he was dragged into the vehicle at gunpoint, he asked the guy where he had known him from.

According to Woja, he was forced to drink from a bottle and got inebriated while being taken away.

He was subsequently taken to an undisclosed location, where he was interrogated on political topics before being drugged.

When the kidnappers exchanged fire with an unknown party at Rajaf east at about 8 p.m., he was able to flee.

He trekked through the jungle, across streams, till he arrived at Lologo 2 police station, unsure of where he was.

The Committee to Project Journalists’ 2021 Impunity Index, which measures the number of unsolved journalist killings as a proportion of a country’s population, put South Sudan fourth.

It goes on to say that in many nations, journalists’ assassins still get away with it, with no one being held accountable in 81 percent of journalist killings over the previous ten years.

The NSS was reacting to a plea from the Committee to Protect Journalists, which urged the South Sudanese government to stop harassing and threatening journalists for doing their jobs.

The kidnappers, however, assured Woja that they would still go after two unknown Eye Radio journalists, according to Woja. 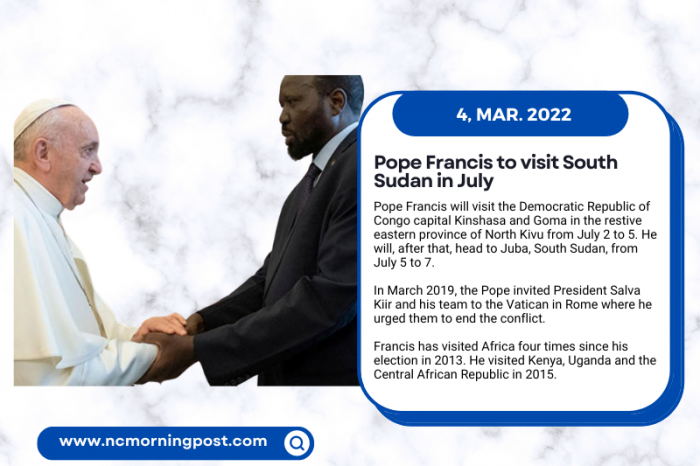 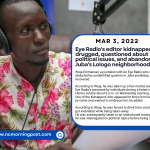