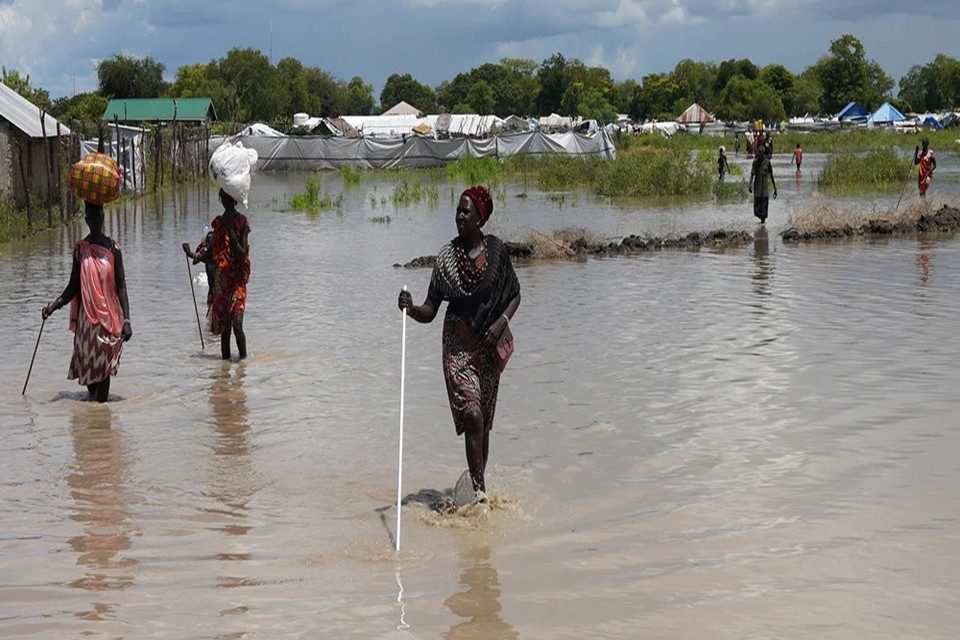 Food distribution efforts have been harmed by financing shortages in the humanitarian response and frequent theft of food convoys and depots. Attacks on charity workers have also increased, and government officials have erected new administrative roadblocks for certain organizations.

“While the peace dividend is being reaped at the highest levels of government, communities are more dissatisfied than ever,” said Abraham Kuol Nyoun, a political scientist at the South Sudan’s University of Juba. “This peace, in its current state, is incapable of putting food on the table.”

Though humanitarian organizations reached the majority of individuals in most need this year, aid officials said attempts to raise the alarm at the international level failed to get more funding, resulting in ration cutbacks for those displaced persons and refugees deemed less in need.

“[We attempted to] convey that this is a major deterioration, but our lobbying has fallen flat on the world stage,” said a senior aid official stationed in Juba who requested anonymity due to the delicate nature of the matter with the government. “There is a perception outside South Sudan that the nation is always in poor shape.”

Some anticipated that when President Salva Kiir established a unity government with opposition leader Riek Machar – now Vice-President – last year, the humanitarian situation would improve as a result of a power-sharing agreement reached in September 2018.

“I’ve planted crops, but I’m afraid to go weed them for fear of getting killed.”

This was the second deal between Kiir and Machar since a civil conflict erupted in 2013, killing more than 400,000 people and displacing millions in the world’s newest nation.

While the two men have halted open political conflict, crucial provisions of the agreement have not been followed, and violence – most of it associated with Juba’s political and military elites – has increased, exacerbated the food crisis and complicated relief operations.

As a result of the new government’s appointment of local authorities, aid organisations have encountered increasing administrative obstacles, which were previously prevalent in South Sudan. “We spend half our time dealing with requests and permissions,” the senior assistance official said, adding that ad hoc registration costs are also charged. “It is occurring across the country.”

Conflict propagation and disruption of livelihoods
South Sudan often suffers from severe food insecurity, which peaks between May and July during the lean season, when households have exhausted the majority of their crop and are heavily reliant on food assistance supplied almost exclusively by aid organisations.

Since 2015, the government has identified 37 pockets of famine, one famine declaration, and a recent “famine likely” statement — made in the absence of death statistics but based on existing evidence indicating famine.

Food insecurity is shown on a map of South Sudan.
This year’s hunger crisis is the result of a number of factors. Flooding in 2020, which impacted over a million people, destroyed coping systems and made recovery difficult. Recent weeks have seen more rainfall, affecting about 90,000 people.

“Floods ruined all my sorghum, and there would be nothing left for me and my children for an extended period of time,” farmer Deng Aleng told The New Humanitarian earlier this month from the northern administrative region of Ruweng.

Financial difficulties have worsened the situation, which has been aggravated by the COVID-19 epidemic. According to the World Bank, South Sudan’s GDP is projected to shrink by 4.1 percent in 2021, as currency devaluation and rising food prices have reduced people’s buying power.

Since 2015, violence — the primary source of famine conditions – has also persisted at a level that some analysts compare to a full-fledged national armed war. Thousands of people have been displaced, agriculture has been affected, and pastoralists’ movement has been limited.

South Sudan is also one of the most hazardous nations in the world for anyone attempting to assist – the Relief Worker Security Database reports that 17 aid workers have been murdered since January.

“Life is worse [this year] than it was last year,” Abuk Kat, a mother of six from the eastern village of Pibor, told The New Humanitarian in a phone conversation. “I’ve planted crops, but I’m afraid to go weed them for fear of getting killed.”

While the government and several humanitarian organisations characterise the present violence as “inter-communal,” analysts believe it is often linked to national political and military dynamics, showing Juba’s lack of commitment in addressing food poverty.

“It is entirely within this government’s ability to establish a food secure environment for its citizens,” a second humanitarian official, who requested anonymity to fear repercussions from the authorities, added. “The issue is one of political will.”

While nominally dedicated to the unity government, experts and UN assessments allege that Kiir’s supporters have sought to weaken the opposition SPLA-IO by promoting high-profile defections and then militarily exploiting the defectors.

Additionally, in certain instances, political and military elites have given material assistance to community militias as part of a larger battle for power and influence within the country’s new political settlement.

Due to their social and geographical proximity, fighting amongst community militias results in particularly high levels of food insecurity, according to an aid worker with extensive experience working on food poverty in South Sudan.

“They understand how to hit each other where it hurts,” said the aid worker, who requested anonymity due to the sensitivity of the subject. “They are aware of the location of the livestock. They are aware of the grain’s storage location. The more incompatible social units there are, the greater the [effect] on food insecurity.”

Access to communities in need has been hampered by the warring forces’ character. Throughout the civil war, agencies gained access to regions through communicating with well-known armed organisations with well-defined command structures. With today’s community militias, “it’s often unclear how to function… and with whom we’re talking,” the aid worker said.

Some worry that the dispute may soon deteriorate. This month’s infighting between opposing SPLA-IO members has resulted in confrontations in several areas of the nation, highlighting increasing concerns about Machar’s leadership.

Additionally, military operations against the renegade National Salvation Front have been conducted in the southern Equatoria areas, which have long been regarded as the country’s breadbasket.

Fears of stolen supplies and financing
Agencies have launched lobbying efforts emphasising that this year’s hunger is “much greater than in previous years,” but the message has failed to connect beyond the nation, according to a senior assistance official.

“The United Kingdom’s famine envoy, Nick Dyer, visited [South Sudan], and the Emergency Directors Group convened a special meeting,” the source said. “However, the extent to which this corresponds to more funding, assistance, and support is debatable.”

Though a United Nations-coordinated humanitarian response plan has sought $1.68 billion for 2021, it is presently supported by just over 50%. Only 35% of funding for food security and livelihoods is covered. Underfunded reaction strategies are frequent in global disasters.

“We refer to them as criminals, yet hunger drove them to steal. One cannot die when sorghum is being carried ahead of him.”

Due to the existing deficit, food assistance has been prioritised for the most vulnerable people at the cost of other food insecure communities. Meanwhile, little money and resources are available in the event of widespread floods in the coming months.

Theft of food assistance on a scale some believe is greater than in past years has harmed operations further. Some instances have been attributed to opportunistic organisations, while fighting communities have sometimes utilised looting to prevent assistance from reaching one another.

According to the UN’s World Food Programme, or WFP, one of the most recent instances occurred on 15 July, when a WFP convoy transporting food supplies to the conflict-affected state of Warrap was attacked after becoming bogged in the mud.

Mawien Majith, a government official from the region where the convoy was assaulted, said that among the thieves were women and children as well as “hundreds of armed youngsters.”

“We label them criminals, yet hunger drove them to steal,” Majith said to The New Humanitarian. “One cannot die when sorghum is being carried ahead of him.”

Adeyinka Badejo, the World Food Programme’s deputy country director in South Sudan, added: “We are already experiencing a financial crisis… and then we have opportunistic thieves stealing food in warehouses or while it is in transit.”

Meanwhile, residents in certain areas have protested against aid agency employment methods, saying that they should hire more personnel from their neighbourhood rather than from other regions of the nation.

According to the WFP, the demonstrations – which have occurred in past years as well – reflect the country’s “increasing dissatisfaction among young over high unemployment and a lack of economic possibilities.”

Nyoun of the University of Juba said, “The young who took part in the conflict have returned to their villages, with no [peace dividend]. They engage in community disputes, stealing, and pillage to survive, since they have no other means of subsistence.” 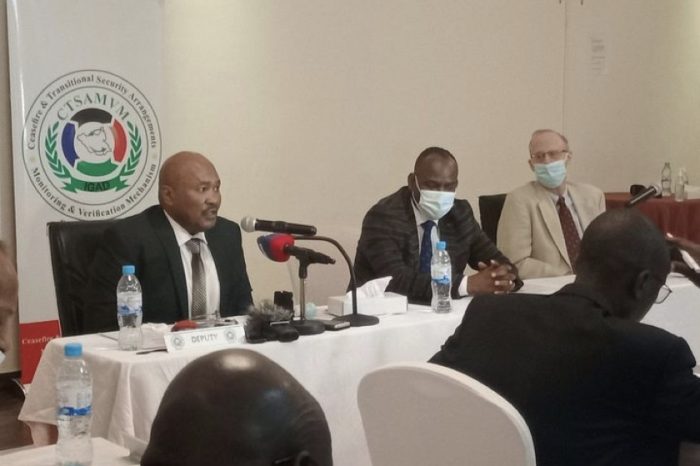 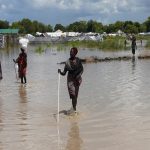