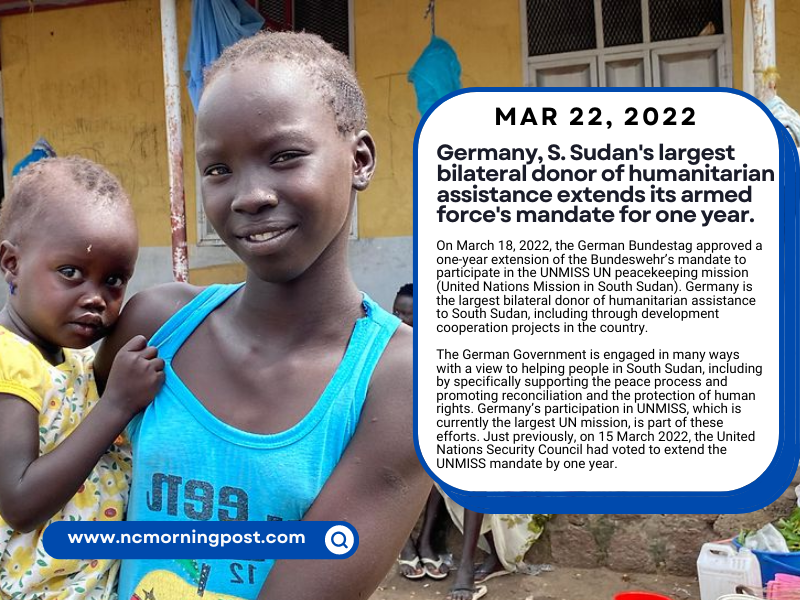 On March 18, 2022, the German Bundestag approved a one-year extension of the Bundeswehr’s mandate to participate in the UNMISS UN peacekeeping mission (United Nations Mission in South Sudan). Germany is the largest bilateral donor of humanitarian assistance to South Sudan, including through development cooperation projects in the country.

The German Government is engaged in many ways with a view to helping people in South Sudan, including by specifically supporting the peace process and promoting reconciliation and the protection of human rights. Germany’s participation in UNMISS, which is currently the largest UN mission, is part of these efforts. Just previously, on 15 March 2022, the United Nations Security Council had voted to extend the UNMISS mandate by one year.

Since gaining independence in 2011, South Sudan has experienced almost uninterrupted unrest. A bloody civil war broke out in 2013. It was not until September 2018 that a peace agreement was finally reached. On the basis of that agreement, a transitional government has been in power since February 2020, although implementation of the agreement has been delayed in key areas.

And violence in the country continues unabated: time and again, conflicts that often arise due to tensions between various ethnic groups lead to deadly attacks, also on the civilian population. In addition, extreme weather events such as devastating floods and long droughts make life difficult for people in the country.

The continuing violence has had a considerable impact on the international support for South Sudan; the country remains one of the most dangerous locations in the world for humanitarian aid workers to operate in.

Yet two-thirds of the overall population of approximately 12 million inhabitants are dependent on humanitarian assistance. Some two million people have been internally displaced, and approximately 2.3 million have fled to neighboring countries. This makes the crisis in South Sudan one of the world’s largest refugee crises.

The long road to peace

The peace process that was initiated in 2018 is making only halting progress. In August 2021, a Transitional National Legislative Assembly was successfully formed. But most of the urgently required reforms in the security sector have still not been implemented.

The international community is striving to safeguard what has been achieved so far, to strengthen and sustainably shape the peace process and thus help bring stability to the country in the long term. The UNMISS peace mission is key to this. Its mandate comprises four areas:

During its renewal of the UNMISS mandate on 15 March 2022, the Security Council strengthened the Mission’s role with a view to supporting the country’s first elections, which South Sudan must now prepare.

Germany has participated in UNMISS ever since it was established in 2011. The Bundeswehr has sent individual staff members to UN staff posts and Headquarters and has seconded experts who significantly contribute to providing the Mission with comprehensive situational awareness.

Germany is also helping people in South Sudan with humanitarian assistance. In 2021, Germany made available approximately 88.8 million euros for this purpose. The support focused on emergency food aid and protective and hygiene measures for women and children, including internally displaced persons and refugees, on ensuring the water supply and on humanitarian mine clearance. As part of its development cooperation efforts, the German government also promotes projects to support rural development and strengthen local administrative structures.

Other focuses of Federal Foreign Office efforts to help stabilize South Sudan include specific activities to implement the Women, Peace and Security agenda (e.g., through a project implemented by Care Deutschland e. V.) as well as supporting the process of drafting a new constitution in cooperation with the Max Planck Foundation for International Peace and the Rule of Law. 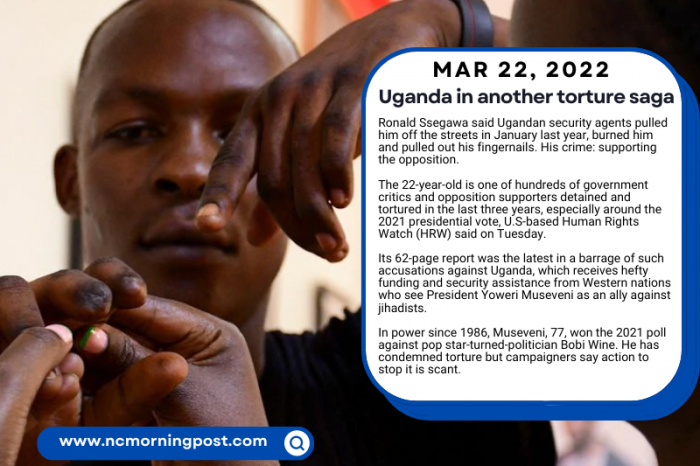 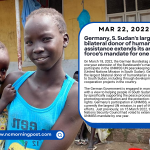