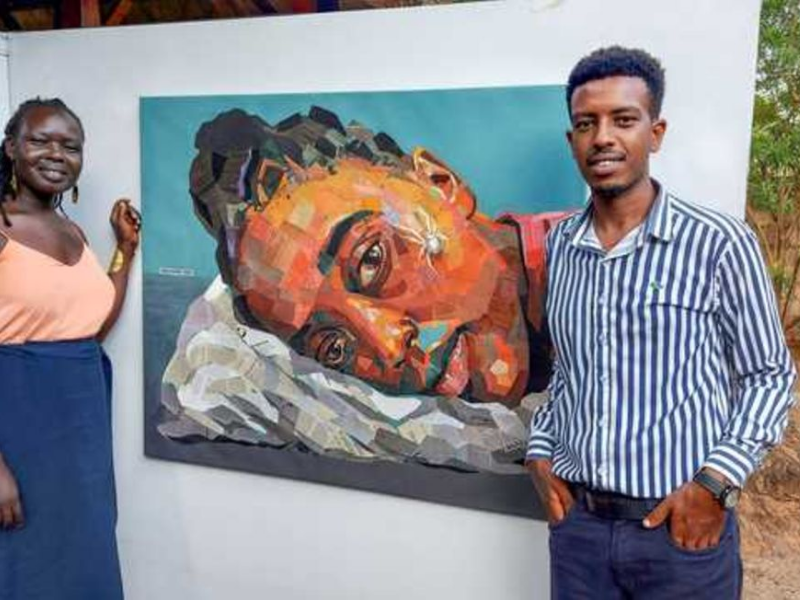 In July this year, South Sudan marked its tenth independence anniversary. It is the world’s youngest nation but faces some of the biggest challenges imaginable. There is the war and conflict that were supposed to have ended with its independence but have, over the years, persisted in one form or another with varying lethality.

There is the ever-present reality of hunger and the threat of starvation due to either floods or drought. And now there is COVID-19 and its accompanying devastation.

All these disasters have touched each South Sudanese, leaving an indelible mark on their lives. But the spirit to overcome and survive has been the dominating feature in the character of the people.

Nothing embodies this indomitable spirit like the fledgling art scene of South Sudan, a country without a national museum or any kind of official archive for creative works and records. But you wouldn’t know it visiting one of the few art exhibitions that would have taken great effort to organize, or speaking to one of the young artists with dreams of a long and successful life following their passion.

One such artist is Jalpan Bol. Ever since he can remember, Jalpan has always loved painting. He started drawing when he was six years old and in primary school in Khartoum, Sudan. By 2014, he had graduated to drawing on a full board and participating in competitions with other artists.

But it has never been easy.

“I used to hustle to bring stability to my life, particularly in painting. It was hard and getting art materials was challenging. At one time I worked as a mason to sustain myself and my family members,” says 26-year-old Jalpan.

One of his favorite paintings depicts Saint Joseph Cathedral in Malakal. It brings back bittersweet memories of taking refuge there during the civil war in 2016. He remembers the nights he slept on the bare floor with his elder brother as war raged in the town. He was among the displaced people who had sought shelter in the church.

Jalpan freely acknowledges that it has not been easy building his art while trying to survive the war that has continued to plague South Sudan. However, he is still grateful. He is now able to pay his fees at the University of Juba and can also participate in exhibitions to showcase his art pieces. His paintings have been featured in more than 15 exhibitions. For the artist, the greatest joy is seeing more young people turning up at the exhibitions as they seek to understand art.

He is becoming quite an influencer in his residential area, with many children sitting around him under a tree, trying to imitate him as he draws and paints.

Jalpan’s journey to the South Sudan art scene took a different path than Abul Oyay’s. She started painting in 2010 while living in London, in the United Kingdom. She learned about different mediums and using colors, and had her first exhibition in South Sudan in 2011. This was an enlightening experience for the 35-year-old artist because she realized that it gave her an opportunity to display her painting skills.

She has exhibited her work in art galleries in Nairobi, and her experiences have given her ideas about doing the same thing back home. For a long time, it was just an idea, but it crystallized into a concrete plan when, in 2018, Abul decided to settle in Juba and follow her vision. She decided to set up a small gallery to show the artistic part of her country and bring out another side of South Sudan apart from its legacy of war and conflict.

“Whatever we are doing here is an experience that I want to share with the people. There is the old culture, which, although different, is not so abstract. We have a mix of music, art, paintings, and writings to bring out the other side of our country,” she says.

Abul returned home through a political party during the implementation of the Revitalised Peace Accord for Resolution of Conflict in South Sudan, which was meant to end the 2013-2018 South Sudanese civil war.

She soon had to look for a bigger space when she realized she could not work in a hotel room. And so, in 2019, the Baobab Art Foundation was born.

Abul has hosted more than 20 artists of various mediums in her Boabab House gallery and has since organized numerous exhibitions, both solo, and group, and assisted in facilitating the creation of artistic pieces and developing the skills of other artists and individuals.

“While in school in Nairobi, I always came home to organize exhibitions,” she adds.

In search of healing

Baobab House showcases the pieces of various artists and attracts individuals who want to taste another side of South Sudan. It also organizes other activities such as trauma healing sessions, yoga, and meet-and-greet functions.

“Some people think there are no artists in South Sudan. On the contrary, there are many. The only problem is that there is limited space to showcase their work so that it can be seen. At Baobab House, we involve visually impaired individuals and also have art clinics where you come and draw and share your life experiences,” says Abul.

One of her favorite programs is The Loose Woman, a series that talks about the emotional makeup of young women in South Sudan. It also explores an individual’s perceptions, self-awareness, and relationships.

“People sometimes misunderstand a woman and label her as being ‘loose’. They do not understand the concept that she owns herself, that she has the power to go beyond the cultural and traditional norms,” she explains.

Nebay Abraha is one of the artists who has had a chance for a solo exhibition at the Boabab House. The 25-year-old Eritrean artist says his love for painting has brought him in contact with many young artists in the East African region.

He agrees with Abul that South Sudan sorely needs more galleries to give space to the teeming artistic talent among its young people. He believes this will allow the artists to network with colleagues from other countries in the region and bridge the diversity gap between them.

Akot Deng, also known as Akot Solip, is a painter and lecturer at the University of Juba. He has been drawing since his childhood back in Sudan and developed a keen interest in painting when he started school.

“I always moved around with my pencil and drew with my friends. At first, I wanted to study engineering but did not get the chance. I ended up studying fine art at the University of Juba,” 29-year-old Akot says.

According to him, art has changed his life and that of other youth because it is their only weapon against the struggles of daily life. “Despite life’s hardships, I try to reflect my feelings through colors and other artwork that I do,” he explains.

Akot is one of the founders of the Anataban (I’m Tired) initiative, which started in 2016 during the civil war. Anataban describes itself on its Facebook page as “a campaign and movement started by young South Sudanese creatives to support the ‘Taban/tired’ people of South Sudan”. The young people behind the initiative were exploring ways to use street art, music, and social media to get the people of South Sudan to speak out about what affects them, especially war and violence, and get their voices heard.

Like Abul and Nebay, Akot believes there is a need to invest in the future of art in South Sudan in order to create a space for the youth to express themselves. His contribution to the artistic future of South Sudan has been in his creativity and recycling of plastic bottles in his work. His pieces have also been exhibited at the Baobab House, which he believes has given him more space to flourish in the industry.

“Sometimes you want to have a great gallery with other artists, but there is always a challenge with the resources and we do not have the right places to showcase our work,” he laments.

His work has been shown at numerous exhibitions in other East African countries and he acknowledges that this has had a big impact on his ideas and helped his work to grow.

That is why he is convinced that there is an urgent need to document the history of art in South Sudan.

“The current generation needs to expand and put in more effort to upgrade the level of art in the country. You can’t find any references from the country’s archive about art.”

Like other artists in South Sudan, Adija Acuil started his career elsewhere, only to return home when peace prevailed. The cartoonist started his work in 2001 in Khartoum but now works from Juba.

His cartoons have gained fame in the country and have even earned a mention by South Sudanese President Salva Kiir during his opening remarks at the second round of peace talks between the transitional government of Sudan and the SPLM-N rebel group of Abdul-Aziz Adam Al-Hilu.

He shares other artists’ concerns about the future development of art in South Sudan. “People are too busy trying to survive, occupied with basic needs such as getting food and following political activities. They do not have time to prioritize art. We have too much artwork but no place for it. The environment is not conducive. We usually team up to exhibit our work, ” Adija explains.”

Like Adija, Tom Dai started his career as a cartoonist in Khartoum and is now operating in Juba.

He has more than 2,000 pieces in his archive and is thinking of developing his work into books. Tom believes that the books would help alleviate the serious shortage of resources and teaching tools that are needed to encourage the growth of art among the youth.

Being an artist has not stopped James Aguer from pursuing other interests. The artist with more than 2,000 pieces to his name is also an art and crafts tutor, and a community trauma healing/stress management facilitator. He has been painting since 1992 and his most popular pieces are about the multiple conflicts of South Sudan.

The loudest voice in support of developing and preserving South Sudan’s art is that of Prof Taban Lo Liyong, the world-renowned poet and fiction writer. According to him, the best way to ensure this is to teach art in school as this would make children adopt the culture in their lives and nurture artists from a young age.

“We are sending people to university art schools who have never touched any painting or any clay, who have not done anything with art materials,” Prof Taban laments.

Speaking from his art collection corner, the 82-year-old professor emphasizes the need to energize the tourist industry by encouraging people to make their own art to attract visitors. Prof. Taban’s collection includes art pieces from all over Africa.

He says he is inspired by the various African myths displayed in the colors of the different masterpieces.

“An artwork is not only one word; there is always a story,” he notes. 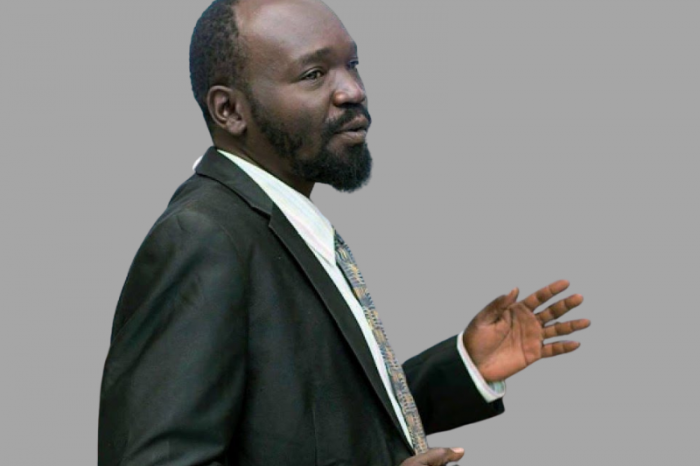 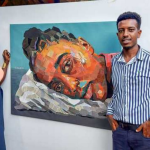