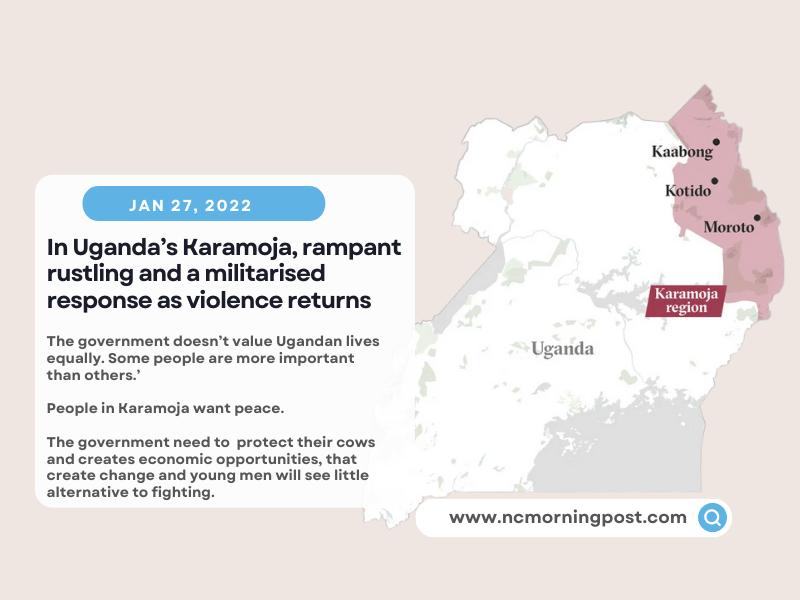 Six days later, the animals were still missing. “When the raiders come here, they find only children protecting the cows,” said Lokong, despondent beneath his orange hat. “There is no one to scare them away because people have disarmed.”

The nine districts of Karamoja, as this semi-arid northeastern borderland is known, enjoyed a decade of peace after the army disarmed gun-wielding rustlers in the early 2000s. But in the last two years, the raiders have returned, killing hundreds of people and stealing the cattle that are their livelihoods. A fresh disarmament campaign, launched by the army in July 2021, has so far failed to stem the violence while drawing allegations of human rights abuses.

Outside the kraal, gaunt men with tartan blankets had gathered to meet with local politicians. Their frustration was palpable: Of 34 kraals in the district, just four had been spared from the raids.

Lokong spoke with an orator’s flourish, flinging out his arms and stooping to his knees. The army was doing nothing to protect their cows, he said. He had heard talk that soldiers were profiting from the raids. Soon, he worried, people would re-arm themselves.

Then, younger herders stepped forward. “The cow is our bank,” said one. Without it, he asked, how can we send our children to school? Another gestured at the politicians: They just sat in their offices and did nothing, he complained.

Karamoja is a hot, dry savannah and, at 30,000 square kilometers, the size of a small country.  People here are sometimes referred to as the Ngikaramojong or Karamajong, a loose term encompassing several distinct groups.

Many of them herd livestock, though they often grow crops too. The region is far from the capital, Kampala, and nowhere in the country is as poor. Literacy rates are just 25 percent.

People in Karamoja want peace, The New Humanitarian was repeatedly told. But until the government protects their cows and creates economic opportunities, some young men will see little alternative to fighting. 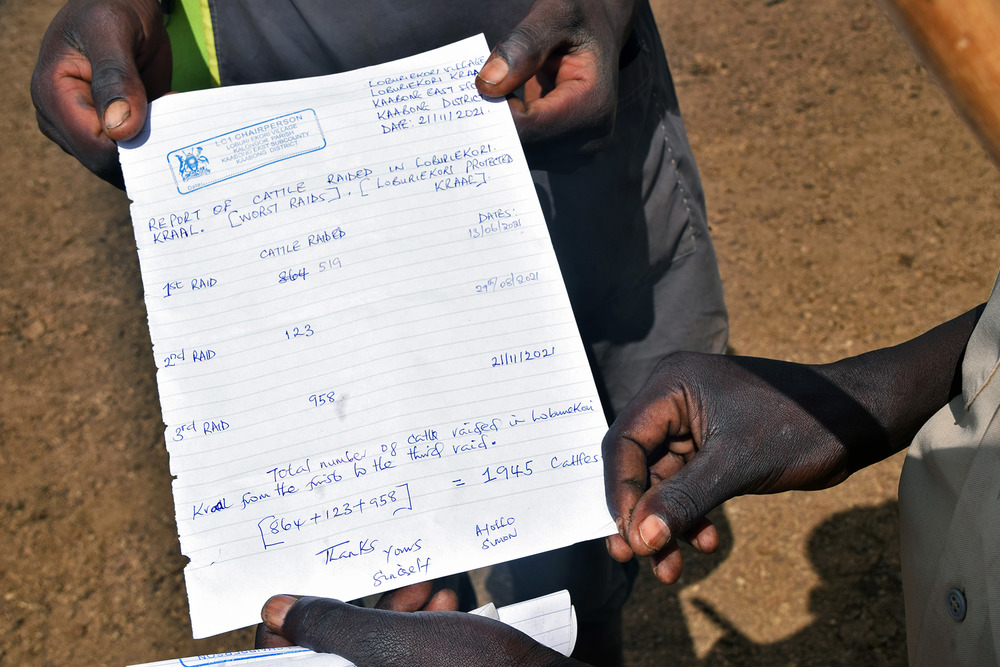 Liam Taylor/TNHA letter drafted in November by community leaders in east Kaabong claimed that nearly 2,000 cattle had been stolen there since June.

“There have been decades of mistrust between the state and the Ngikaramojong,” said Simon Peter Longoli, executive director of the Karamoja Development Forum, a civil society organization.

“The government doesn’t value Ugandan lives equally,” he told The New Humanitarian. “Some people are more important than others. And at the bottom of the hierarchy, that’s where you’ll find the Ngikaramojong.”

The Ugandan state has been trying to disarm the people of Karamoja for the best part of a century. In 1979, after the collapse of Idi Amin’s regime, soldiers abandoned the barracks in Moroto, leaving their unguarded cache of weapons to spill across the region. The violence reached unprecedented levels.

Under the current president, Yoweri Museveni, the army launched disarmament campaigns in 2001 and 2006. Thousands of guns were recovered, and by 2010 relative peace was restored. But the army’s tactics were brutal, and little was done to rehabilitate the young men who gave up their guns.

In the words of Jino Meri, the elected chairman of Kaabong district, “they didn’t have post-disarmament programs to disarm the mind.”.

Now trouble has returned. The first warning sign was a spate of thefts by petty criminals—known as “lonetia“—that began more than a decade ago. Initially, cows started being taken, just one or two at a time, but soon the local rivalries escalated into tit-for-tat raids.

One hotspot was the fertile pasture around Kobebe dam, where Turkana cattle herders from neighboring Kenya would come to graze their cows. They had never been disarmed, and soon there was a flow of guns across the porous border, as some Turkana joined forces with resurgent local raiders.

By the end of 2019, the situation will have “spiraled out of hand,” according to a report presented to the president last year by the Karamoja Parliamentary Group of lawmakers. “The lack of intervention by the security forces to recover lost property created apathy,” they wrote, and resulted in “communities taking the law into their own hands.” 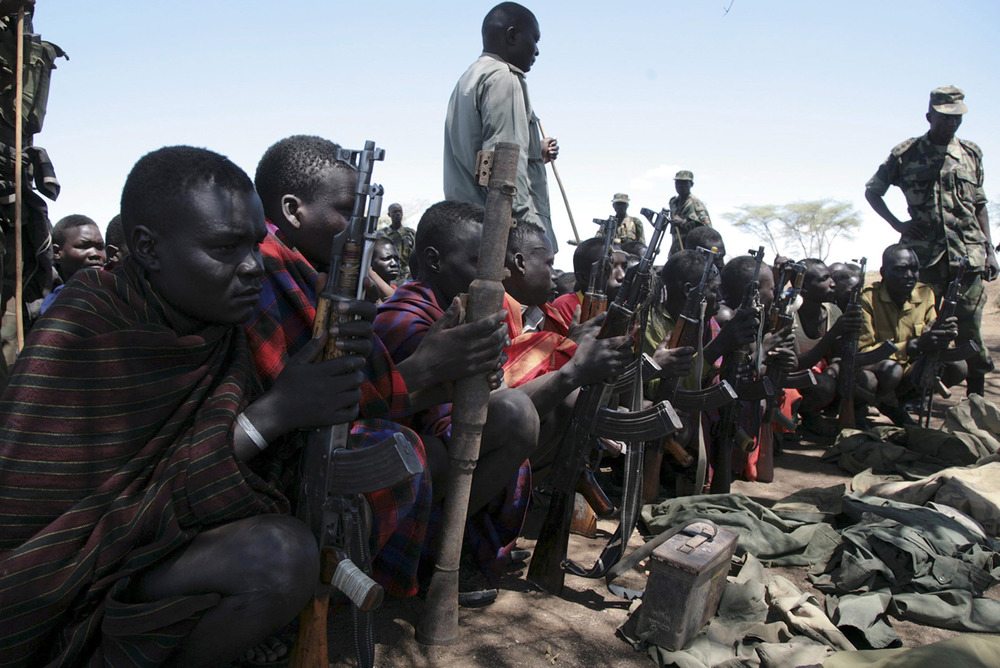 Euan Denholm/REUTERSKaramojong warriors sit with their weapons during a ‘cordon and search operation by the Ugandan army in 2007. A new disarmament campaign is underway.

The problem was made worse by a foot-and-mouth outbreak in some areas, and then by COVID-19, both of which disrupted the legitimate cattle trade and left young men idle.

The level of violence remains lower than it was in previous waves of raiding, and there are far fewer guns than in the past. Nonetheless, the state’s monopoly on violence is being eroded. Rival groups within Karamoja – linguistically and culturally related, but with distinct local identities – are turning against each other.

“They didn’t have post-disarmament programmes to disarm the mind.”

A government press release in September referred to 400 deaths, while the Karamoja Development Forum counted 600 deaths from raids between 2019 and July 2021.

No respect for community

In interviews across four districts of Karamoja, people remembered a time when cattle raiding conformed to some kind of social order. Young men stole cattle to pay a bride price, or simply to keep as wealth. They sought the blessing of elders before they went on a raid, and they slaughtered a bull as a mark of respect on their return.

But today, there is a growing feeling that the karacuna, or male youth, have cut loose from the community.

“People have lost respect for the elders,” said Simon Peter Lomoe, executive director of the Dynamic Agro-Pastoralist Development Association, a civil society group in Kaabong. “They used to tell people never kill women, never kill children. But now, the kind of generation we have these days no longer respects those things.”

Locals told stories of raiders raping and killing women, as well as ransacking houses and emptying the safe boxes of village savings groups.

“There is a new element of commercialization, of thugs just agreeing to form a group to steal,” said Remigio Achia, member of parliament for Pian County and chairman of the Karamoja Parliamentary Group.

“Sometimes, when the security [forces] pursue them, they find the cows reach the tarmac road. You look on the other side of the road: There are no footmarks for the cows crossing,” Achia told The New Humanitarian. “You just find the lorries are there: The cows are loaded and taken.” 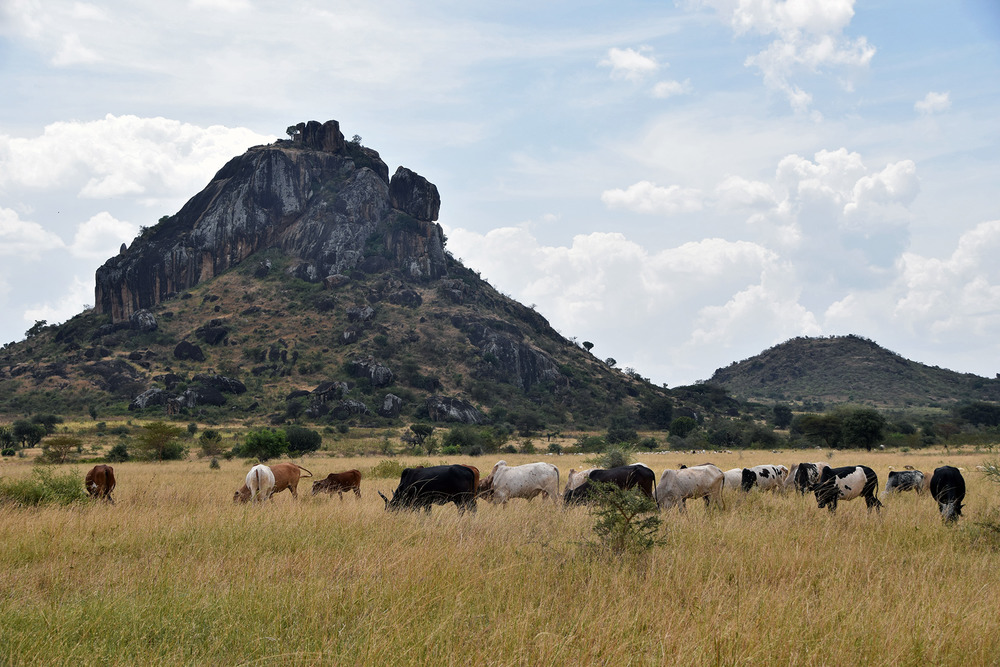 Liam Taylor/TNHMany people in Karamoja are cattle-keepers who base their livelihoods on herd grazing, such as here in Kaabong district, 26 November 2021.

Peter Toyan, a cattle trader in Kotido, said the traffic in stolen cows pushes down prices in regional markets. “The raiders sell the animals cheaply and leave immediately,” he explained.

Leaders, activists, and locals in Karamoja told The New Humanitarian that soldiers are among those believed to be profiting from the insecurity. Some described finding army-issue bullet cartridges left behind after raids.

The allegation was denied by Brigadier General Joseph Balikudembe, commander of the Ugandan army’s 3rd Division, who is leading the military response in the region.

Balikudembe said some raiders were deserters from Local Defence Units, a state militia recruited to protect kraals, but that such incidents have stopped since the units were integrated into the army and transferred outside Karamoja last year.

The commander insisted that “the security situation is calm”, while acknowledging “some isolated incidents of cattle theft” by raiders.

But the heavy military presence in the region suggests otherwise, with the deployment of attack helicopters, surveillance drones, and armoured vehicles.

The army’s disarmament campaign collected 105 guns in the first three months up until the end of September, said Balikudembe. He did not give an estimate for the number of illegal guns in Karamoja, but the police spokesman put the figure at about 500.

In the same period, around 350 alleged cattle raiders were prosecuted by army court martial. The Ugandan government routinely tries civilians before military courts if they are accused of possessing weapons, despite judges ruling this practice unconstitutional.

Balikudembe said the disarmament exercise is “concurrently voluntary and forceful”, combining an amnesty for those who hand in weapons with the use of cordon-and-search operations and mobile infantry squads.

On the ground, the memories of past disarmament campaigns are still raw.

“People are on the run.”

“Our word for the state institutions and government is ‘ariang’, which is ‘the rough one’,” said Longoli of the Karamoja Development Forum. “Our experiences are fraught with violence and arrogance and exploitation.”

Most people interviewed for this story said the army’s approach has been more measured than in the past.

Nonetheless, there is clear evidence of human rights abuses. Robert Kotchani, the representative of the Office of the United Nations High Commissioner for Human Rights in Uganda, said OHCHR had documented recent instances of torture, extra-judicial executions, and disproportionate use of force by the Ugandan army in Karamoja.

“We have documented cases where people were tied to trees, beaten up seriously so that they could reveal where the guns are, or instances where they were deprived of food for days,” he said. People have shown us bruises, some cuts, broken arms, legs.

Young men in the violence-prone area of Panyangara, speaking anonymously for fear of repercussions, described being trapped between the wanton violence of the raiders and the thuggish tactics of the army. Talk to the raiders, and the army will cane you: Talk to the army, and the raiders will hunt you down, they said.

The young men described one occasion when the raiders emptied the coins from a slot machine. As for the soldiers, “when they arrest you and they discover that you have some money, they will not release you until you give out that money,” one man said.

“People are on the run,” added another. “Right now, you find villages are just there without people.”

Author: Liam Taylor, a freelance journalist working in Uganda, the article written for the The New Humanitarian 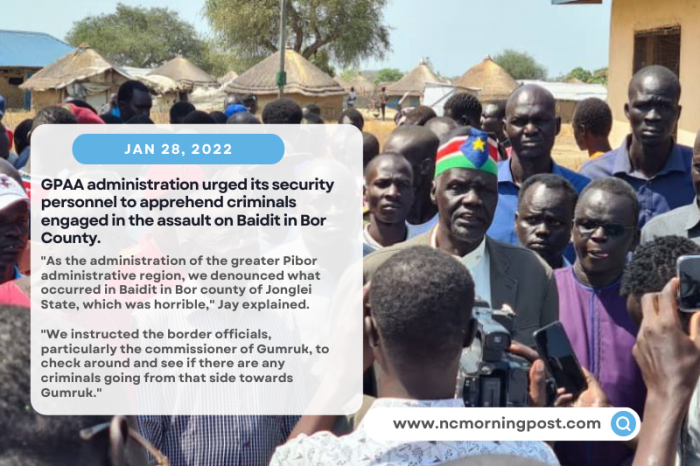 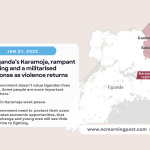