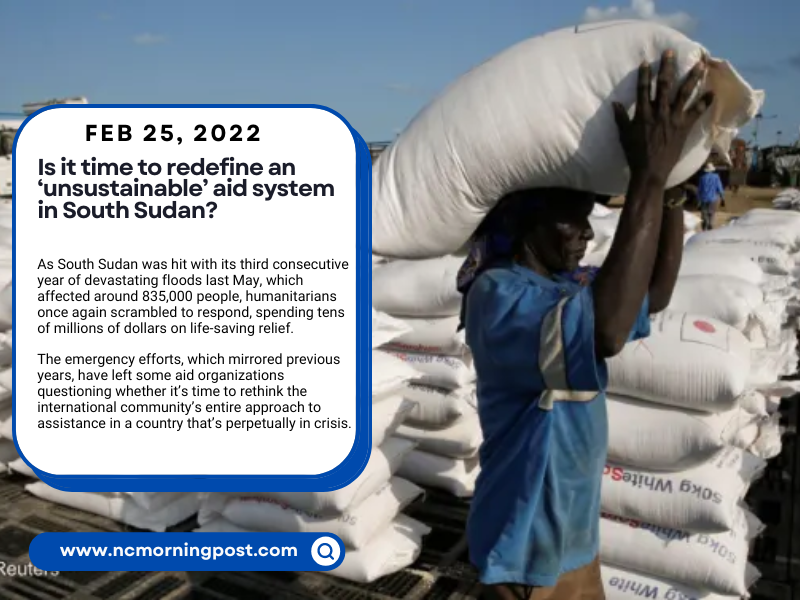 As South Sudan was hit with its third consecutive year of devastating floods last May, which affected around 835,000 people, humanitarians once again scrambled to respond, spending tens of millions of dollars on life-saving relief. The emergency efforts, which mirrored previous years, have left some aid organizations questioning whether it’s time to rethink the international community’s entire approach to assistance in a country that’s perpetually in crisis.

Since the country gained independence in 2011 and erupted into a crippling five-year civil war shortly after, billions of dollars have poured in to combat the growing needs caused by conflict, political instability, and climate change, which has pushed hundreds of thousands to starvation and displaced more than 4 million people.

As needs have increased, funds have been cut, and donor fatigue is setting in, there’s concern that the current model of assistance is not sustainable and could be creating unintended negative consequences for the people it is meant to be serving.

“The whole system is unsustainable,” said Miklos Gosztonyi, a humanitarian analyst at Save the Children. If you take the example of the floods, we’re pretty much waiting every year to see if the floods are worse, as if this was a one-time occurrence as we scramble to respond to them. “We should completely rethink the way we’re doing things because this will be the norm for the foreseeable future in South Sudan,” he said.

South Sudan’s government puts little money into its citizens’ well-being. The proposed national budget for 2021–2022 allocated 1%—approximately $8 million, according to exchange rates from the Bank of South Sudan—to humanitarian affairs, excluding health, compared with 15%—approximately $108 million—for the security sector, according to parliament’s February budget speech seen by Devex. Even though the government promised $10 million for the flood response last year, when Devex visited several flood-affected towns in December, local officials said they had received no support from the central government.

South Sudan observers said the result of years of international aid propping up the country’s citizens—the United States has spent nearly $7.5 billion in humanitarian and development assistance since the civil war erupted in 2013—has made it harder to change course.

“By holding the population of South Sudan back from the abyss of starvation, donor governments are letting the government of South Sudan off the hook. And they’ve been doing it for so long that many in power in South Sudan sincerely believe it is their job, which compounds the issue,” said Nicholas Coghlan, former Canadian ambassador to South Sudan between 2012 and 2016. “The conundrum is how to get [the] government to take up its responsibilities without penalizing the most desperate,” he said.

Yet the discussion about rethinking assistance is a contentious one among aid groups in South Sudan, with previous attempts at broaching it being rebuked. Parties to the conflict were manipulating aid and that assistance was disproportionately benefiting the government in Juba, according to an unpublished 2018 report by the U.S. Institute of Peace and the Overseas Development Institute titled “The Unintended Consequences of Humanitarian Action in South Sudan,” which was seen by Devex.

The report received pushback from various groups, including InterAction, which cautioned  that the recommendations risked further politicizing humanitarian action and distracting the diplomatic community from its responsibilities of pushing for peace.

Recently, however, it appears that there might be more of an appetite for the discussion. According to an unpublished internal report from the aid community last year, which was seen by Devex, the dire humanitarian situation in the country is unlikely to improve and that opportunities to link emergency assistance with development and peace building have been missed, while people’s coping strategies continue eroding. The report said a “reflection” on aid assistance was needed with plans to come up with recommendations this year.

When looking at problems with aid in South Sudan, some point to Operation Lifeline Sudan, the largest ever coordinated humanitarian effort with agreement from both the government and rebel groups to provide access across what was then war-torn Sudan. While the first of its kind, and in many ways successful, OLS is criticized for leading to a culture of aid dependency, and perpetuating the war economy since aid was being instrumentalized by all the parties to the conflict, something that’s been replicated in the current response, aid workers said.

“We need to acknowledge that in many ways we’re still reproducing the same model of Operation Lifeline Sudan, and there’s an urgent need for us humanitarians to have an open and honest discussion on how to rethink the response,” Save the Children’s Gosztonyi said.

He said there needs to be more dialogue about how aid has fed into the conflict’s political economy, how to put conflict sensitivity into practice rather than just paying “lip service” to it, and there needs to be a push to implement the commitments under the Grand Bargain, which aims to make aid more effective and efficient and more accountable to the South Sudanese people, he said.

In a soon-to-be-published research report seen by Devex by South Sudanese and international researchers documenting South Sudanese opinions on aid, locals said the biggest concerns were the lack of accountability and trust between the different parties involved in aid delivery — including the international community, the government, and communities, the creation of dependency, and not being involved in decision making about where the aid goes.

“These South Sudanese people feel strongly that aid actors operate unaccountably in their country and in their communities, with aid still something that is done to them rather than with them or for them,” said the draft report.

Local organizations said there was often a disconnect between policies decided at agency headquarters and the needs on the ground and that there’s too much emphasis placed on quantifying output rather than producing things that benefit people.

Rob Lancaster, general secretary for Peace Canal, a local peace-building organization said though there is a lot of good stuff happening on the ground, there is also “a lot of fluff.” For example, despite there being no evidence that one off skills trainings or events have any meaningful impact, this has become almost a sector in itself, to the point that many of the brightest young people in the country circulate from one training or workshop to the next, he said.

In addition to donor disconnect, a lack of coordination and an overlap of efforts among aid groups on the ground can delay initiatives so much that by the time projects are completed, the immediate need has passed, said Lancaster. Last year, one community wanted a care center built for returning abductees, and despite a common desire to get it done, administrative challenges and errors in execution delayed the project by several months, and by the time it was built, many of the people who needed it were gone, he said.

‘You have to start somewhere’

To change the system, one place to start is for donors to give money directly to local partners, who often implement the projects, instead of having it funneled through international organizations or the United Nations, said Simon Buony, program director for Nile Hope, a local aid group. He said this would give local agencies more input in terms of how money was spent and potentially more funds to work with by eliminating the middleman.

The international community also needs to better localize assistance, letting South Sudanese take the lead in decision making and giving national aid groups more seats at the table during donor conferences and meetings, he said. “It is very important because they can give first-hand information to the donors and to the international communities… [but this] is not happening much,” he said.

“ We should completely rethink the way we’re doing things because this will be the norm for the foreseeable future in South Sudan.”— Miklos Gosztonyi, humanitarian analyst, Save the Children

For the community’s part, people need to start finding ways to subsist on their own and more awareness needs to be raised that aid is not going to last forever because people are becoming “lazy,” Buony said. Instead of proactively farming or fishing or rearing cattle like they used to, people sit around waiting for food rations, he said.

In order to reduce dependency, people should be given skills training when there are periods of calm in the country. When clashes erupted in Western Equatoria in 2016 and people fled to Uganda, those who had learned how to bake bread with the help of aid projects continued baking once they left and were able to support their families, Buony said.

More focus on development could help address emergencies such as floods by strengthening prevention measures such as early warning systems that monitor rainfall and rivers, building better flood protection such as dykes and channels to direct the water, and increasing communication, said Geraud Poueme, project manager and flood specialist for the Food and Agriculture Organization.

South Sudan’s early warning system is limited and needs approximately $80 million for enhanced technology and to train people so it can predict and alert communities about floods sooner, therefore limiting the damage to people’s lives and property, he said.

But most agencies devote the majority of their efforts to responding rather than investing in anticipatory mitigation measures, he said. “We don’t properly talk about it, we just talk about how we can rescue, how we can respond, how we can manage the situation when it’s already catastrophic,” Poueme said.

Last year, FAO worked with people in towns in Aweil and Maban, disseminating climate information through the radio and training people on how to safeguard their crops and build dykes and water channels, he said. FAO also conducted an assessment and produced a report for long-term flood protection in Pibor and is now looking for funders to implement the recommendations. However, securing funding has become harder due to donor fatigue and competition with COVID-19, he said.

Yet some donors have started to change tack. The World Bank, which downgraded its projects when the war erupted, launched a new two-year country engagement approach last year that includes a strategic shift, notably the move from third-party implementation to giving money directly to the government for development initiatives, said Firas Raad, World Bank country manager for South Sudan.

“At some point if you want to work on long-term development and you want to take the long view and see this relationship with South Sudan within a historical prism … then you have to start somewhere,” he said.

The World Bank has already shifted to government-led implementation starting with agriculture and wants to include other sectors including public financial management, community resilience, and social protection, the latter aiming to expand social safety nets by financing cash transfers to the most vulnerable households, he said. There’s also a $70 million project on gender and women empowerment with a focus on survivors of gender-based violence launching later this year, he said.

However, there is concern that money given directly to South Sudan’s government—which has been accused of rampant, endemic corruption—could be squandered. The country was declared the most corrupt in the world last year by Transparency International’s Corruption Perceptions index.

Despite the need for a rethink of assistance in South Sudan, aid groups said that however it is adapted, it won’t be what pulls the country out of decades of turmoil.

“Humanitarian assistance will never fix a crisis such as South Sudan,” said Garth Smith, a former country director for an international aid group in South Sudan.

“There may be aid dependency and it may be that the ways organizations are providing aid can contribute to war economies, but you’ll never solve the underlying political crisis just by fixing the way we’re providing assistance. The government and the regional and international community must bear responsibility for addressing those underlying causes, “he said. 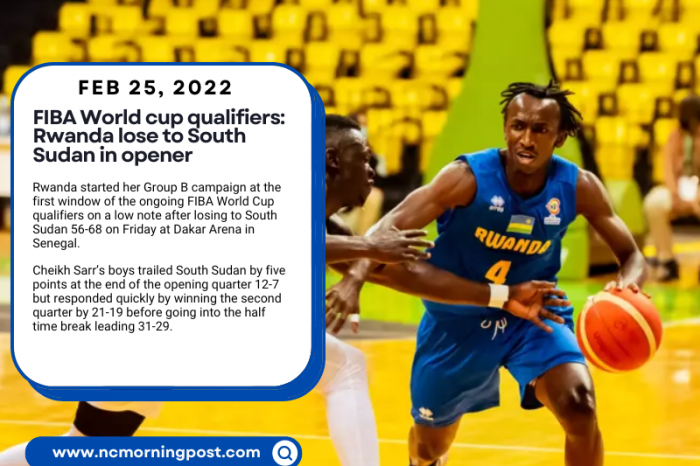 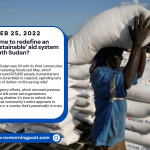