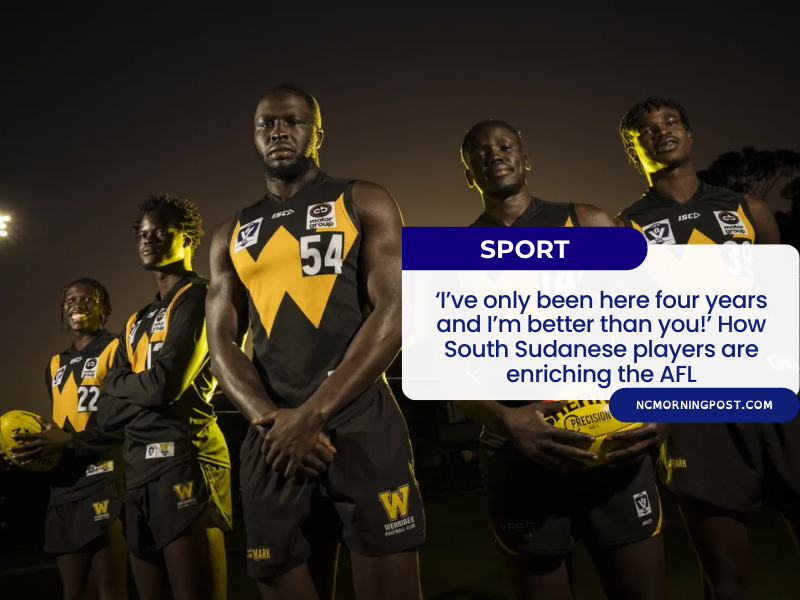 Buku Khamis made the all-Australian Under 16 team in 2016 and was at Melbourne airport with his passport, about to board a plane to represent Australia in New Zealand alongside Sam Walsh, Connor Rozee, Jack Lukosius, Tarryn Thomas, and the King twins. But at the gate, a shock awaited. Khamis was turned back because he was not an Australian citizen.

“We had to put him in a taxi and sent him back to his foster family in the western suburbs,” said Kevin Sheehan, the doyen and guru of AFL talent-spotters. He and coach Luke Power presented Khamis with his Australian guernsey in a subsequent private ceremony.

Two years later, in 2018, Khamis made the Under 18 all-Australian side as a half-back, was inexplicably overlooked in the draft, but taken by the Bulldogs as a Next Gen academy rookie. That was him out there soaring over and away from Collingwood at Marvel stadium the other Friday night. You could hardly miss him.

Khamis is one of a dozen players on AFL and AFLW lists whose family origins are in South Sudan, which gained independence from Sudan in 2011. His story is all their stories. Axiomatically, they’ve had to go the extra mile. Most have in their backgrounds upheaval, refugee camps, resettlement and still scattered families to whom AFL footy was and is an alien pursuit. Twelve might not sound many, but it already outstrips in the AFL’s demographics the vastly bigger and older Asian migrant communities, for instance.

“We haven’t been able to crack that market,” said Sheehan. “But the Africans are great for the game because they add so much to it.” The best known are Majak Daw, Aliir Aliir, Changkouth Jiath and Mabior Chol. These you will readily recognize. Their profiles distinguished them in advance and their footy caught up. In 2021, Aliir became the first South Sudanese Australian to make the All-Australian team.

In AFLW, the trail is being blazed by Akec Makur Chuot, now with Hawthorn after stints at Fremantle and Richmond.

The latest is Bigoa Nyuon, aptly Biggie to all, who made his debut for Richmond two weeks ago. Biggie is the sixth of eight siblings. One is Gach, who was briefly on Essendon’s list some years ago before sadly running off life’s rails.

Another sibling is Nyadol, the noted lawyer, writer, and activist. She was at a hospital for a doctor’s appointment when Biggie rang to say he had been picked. “I just desperately needed to shout, but I couldn’t,” she said. “I can’t explain how much joy he brought to us.”

The Nyuons’ footy odyssey is typical. When the family first arrived in Australia, they didn’t like AFL, because it wasn’t soccer and because of what Nyadol calls the “migrant experience”.

“The emigre kid, especially the refugee, your parents want you to pursue things that are solid,” she said. “A British comedian jokes about it: in migrant communities, you’re either a lawyer, a doctor, an engineer or a disgrace to your family. We were expected to go to school and university and do something real.

“Football was dream-generated. It wasn’t good enough to survive on. It took us a long time to let go of this image of the need to survive.

“Now it brings me so much joy on two levels, as a game, and on the level that my siblings get to achieve dreams that seemed unrealistic to us when we came here. It’s a story of feeling safe enough and secure enough in a country to leave behind survival and go into dreaming.”

A couple of years ago, Nyadol felt strangely excited as she left work one Friday night, but could not explain why. “Then it dawned on me: it was Friday night footy,” she said. “And I remember thinking: I have become one of them!”

The lag tells a tale. As long ago as 2004, that arch-dreamer Kevin Sheedy brought in Goaner Tutlan to train with Essendon, though he was never listed. In 2009, Daw became the first South Sudanese to be drafted, as a rookie, and in 2013 the first to play a game.

Others followed, mostly on the fringes, but last year became a watershed when Mac Andrew was drafted by Gold Coast at No 5 and Leek Aleer by GWS at No 15. It was an AFL draft with a sheen of NBA about it.

Sheehan has been eyewitness-in-chief to the emergence of this new cohort. Invited by Western Jets manager Shane Sexton to a game at Werribee years ago, he saw a lithe teenager suddenly explode, taking the mark of the day and kicking goal of the day. “I thought, how exciting’s this?” he said. It was Daw.

In Sheehan’s mind, an idea formed. “I thought, we’ve got to force the market, put it that way,” he said.”

Queensland state talent manager and former Swan Mark Browning alerted Sheehan to a kid in a trial one day at Ikon Park. “He looked like Buddy Franklin,” Sheehan said. “There were a couple of moments where he just stepped around on the left and went ping.” ‘He’ was Chol.

At the National Academy a year or two later, he clapped his eyes on another. “It only took one training session and we said, that kid’s going to make it,” he said. The kid was Jiath, CJ to all.

Best of all, there was the Queenslander who on a bus after a trial match in Sydney one day fell into conversation with a teammate from WA and found that both their mothers were looking for lost sisters – then realized their mothers were sisters and they were cousins. As a result, Aliir moved to Perth and in 2013 became the first South Sudanese to be taken in the national rather than the rookie draft.

As the AFL combed the world for new markets and sources, all the while one was gathering almost unseen under their eyes. Geopolitics provided.

But it hasn’t all been simply a matter of tapping them on their shoulders and handing them guernseys. Soccer, basketball, and athletics still make their appeal. Thomas Deng captained the Olyroos in Tokyo. Peter Bol captivated the country with his run in the 800 meters there. Sheehan remembers knocking on the door of a likely 201-cm type who subsequently won a US college basketball scholarship and is still there.

Nor has it been all cheer and skittles for the African AFL pioneers. At least two have had skirmishes with the law, including Gach Nyuon, and Daw’s travails have been well-documented. It is not within everyone to blithely outrun a disrupted life.

There is also culture shock, then on top of that the shock of the locker room environment and the strictures of elite sport. This disorientation applies to most of the footy’s minorities, including Indigenous Australians, Muslims, and other Africans.

But change is broad in clubland, says Tarkyn Lockyer, Collingwood 200-gamer and now AFL academy manager and coach. “They’re far more understanding of the complexities in life in general,” he said. “Yes, it’s an elite competition and the behaviors associated with that are uncompromising at times. But the support and well-being networks the players are afforded now are greater than ever.

“Potentially, that’s why we’re seeing people from all walks of life flourishing. They feel supported and safe, and we’re seeing the best versions of themselves.” Lockyer says the AFL cohort now is more truly representative of the Australian community.

Personally, he can’t wait for the debut of Andrew, national academy alumni. “He’s a 200-cm ruck who can play forward or back,” he said. “His ability to impact through his vertical jump, then follow up at a ground level, is really exciting. When the ball hits the ground, he genuinely plays like an inside midfielder.”

Two COVID-blighted seasons played havoc with footy’s supply chains, but slowly they’re reconnecting. At VFL club Werribee, five South Sudanese have now pooled, including Reuben William, who played three games for Brisbane in 2016. Their coach is Michael Barlow, an AFL late bloomer in his time who knows all about the hard slog to the top. His mentor is the ubiquitous Mark Williams, who has a Sheedy-esque vocation for a rainbow AFL.

Barlow says the south Sudanese division is a joy to coach. All have been dropped at some point this year, none has grumbled. “State league footy is the hardest in terms of commitment,” Barlow said. “The wages aren’t there. Our salary cap is $210,000. The players are largely at uni or working, providing for their own lives.

“Bior Malual, for instance, is a real contributor to his family, He works 40, 50 hours a week, and commits to a state league program. I’m privy to lots of stories like that.”

Barlow won’t nominate the next likely AFL player among them. “We’ve got one who hasn’t played VFL yet, Emmanuel Ajang,” he said. “I won’t say he’s my favorite, but I will tell you that my brother is his player sponsor.”

Two weeks ago, all five plus two other teammates with non-traditional heritage played together for the Fitzroy Cubs, a Chris Johnson-inspired team made up entirely of multicultural and Indigenous players, who played and beat Carlton’s VFL team. Watching from the wings, Barlow and Sheehan separately noted the same thing, that in this environment, they drew strength from one another and gave full expression to their flair and instinct.

The cheek necessary to play topline sport peeked through, too. Post-game, a Carlton player told Sheehan that at the final siren, one of the Sudanese players had grabbed him by the guernsey and said: “I’ve only been here four years – and I’m better than you already.” Both laughed.

For the South Sudanese community, this flourishing is a fillip. You could say that in the space of one Federal parliament, the story has changed from African gangs to gangling Africans, except that the gangs existed only in a politician’s fevered imagination and the footballers are a whole lot better than merely gangling.

“Just pride. They give us pride,” said Nyadol Nyuon. “We haven’t had the best media coverage. It’s good to get positive media coverage. It makes the idea seem real to the young kids. If you can see yourself in something, it becomes real.

“A lot of the boys here grew up thinking they would have to become basketballers. A lot now see footy as a real option. 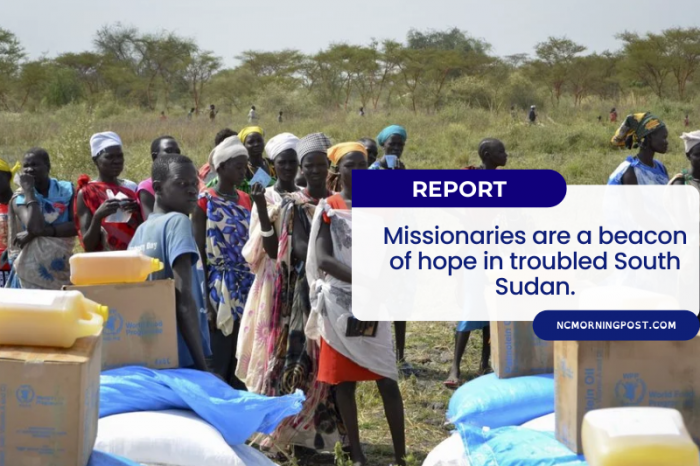 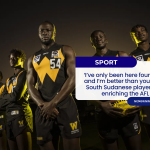