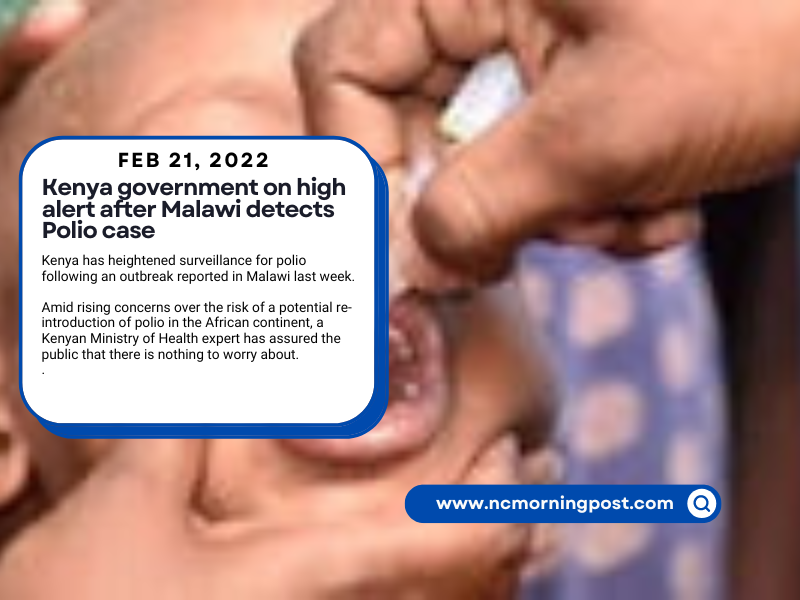 Amid rising concerns over the risk of a potential re-introduction of polio in the African continent, a Kenyan Ministry of Health expert has assured the public that there is nothing to worry about.

At the same time, however, Director-General of Health Patrick Amoth said that although the country has always been on a high alert of a potential outbreak especially because of the porous borders it shares with Somalia, which is classified by the international health regulations (IHR) as a state infected with circulating vaccine-derived poliovirus type 2 with potential risk of international spread.

Dr Amoth added that the government has increased its surveillance for the highly contagious disease.

The reasons for heightened scrutiny follow the discovery of the disease in Malawi that has left a three-year-old girl paralysed.

According to the World Health Organization’s regional office for Africa (WHO Afro), the case announced Thursday last week resulted for a wild poliovirus imported from Pakistan.

According to the global polio eradication initiative (GPEI), detection of even a single case of polio anywhere in the world is considered an outbreak. As soon as the polio surveillance system sounds the alert that a virus has been found, an outbreak response springs into action.

“The outbreak in Malawi means a lot not only for Kenya but also Africa. Although it is not a source of worry, we have to enhance our surveillance because of our global connectivity. We do not know how many people have come into contact with the genotype in Pakistan,” noted Dr Amoth.

He added that among the things the surveillance will be keen to detect are cases of children with floppy limbs occasioned by the onset of weakness or paralysis with reduced muscle tone, a condition known as acute flaccid paralysis, the gold standard for detecting cases of poliomyelitis.

“We are also carrying out environmental analysis of sewer samples in Mombasa and Nairobi,” he said.

Africa was declared free of indigenous wild polio in August 2020 after eliminating all forms of wild polio from the region.

As for Kenya, the country has been free of any wild poliovirus (WPV) circulation since 2014. However, the country and the horn of Africa region continues to be at higher risk of polio due to low immunisation coverage magnified with population movement.

Dr Amoth explained that most of the country mid-last year carried out a campaign to vaccinate children under five years in 13 high risk counties after surveillance teams confirmed six cases of poliovirus in early February from sewerage materials in Garissa and Mombasa.

No wild type polioviruses and circulating vaccine derived polioviruses (cVDPVs) were reported in Kenya in 2021. However, a recent study by the Kenya Medical Research Institute (Kemri) detected vaccine-derived poliovirus from sewer samples in Mombasa’s Jomvu site in November collected during environmental surveillance of polioviruses.

Vaccine-derived polio occurs in areas of low immunisation when the live but attenuated virus in the oral polio vaccine reverts and regains its ability to paralyse and spread.

Polio, also known as poliomyelitis, is a highly contagious disease caused by a virus that attacks the nervous system causing paralysis in children.

It is transmitted from person-to-person mainly through faecal matter entering the mouth with children under five years being more likely to contract the disease than any other group.

In Africa, the disease once paralysed about 75,000 children every year.

While there is no cure for polio, the disease can be prevented through administration of a simple and effective vaccine.

One in 200 infections leads to irreversible paralysis. Among those paralysed, WHO estimates that five to 10 percent die when their breathing muscles become immobilised.

Polio remains endemic in Afghanistan and Pakistan. The strain detected in the Malawi case is linked to the one that has been circulating in Sindh Province in Pakistan.

“As long as wild polio exists anywhere in the world all countries remain at risk of importation of the virus,” said Dr Matshidiso Moeti, WHO Regional Director for Africa.

“Following the detection of wild polio in Malawi, we’re taking urgent measures to forestall its potential spread. Thanks to a high level of polio surveillance in the continent and the capacity to quickly detect the virus, we can swiftly launch a rapid response and protect children from the debilitating impact of this disease.”

To stamp out vaccine-derived polio outbreaks, the WHO granted emergency use listing (EUL) for the new oral polio vaccine on November 2019.

The new vaccine, known as Novel Oral Polio Vaccine Type 2 (nOPV2), has the potential to shield against outbreaks caused by a mutated polio strain linked to the oral vaccine. It was introduced as part of the global endgame strategy against the wild polio virus 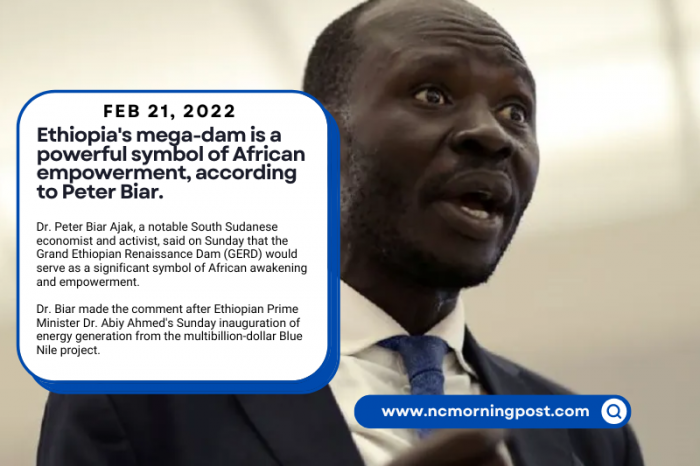 Ethiopia's mega-dam is a powerful symbol of African empowerment, according to Peter Biar 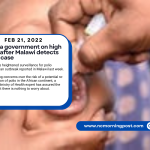