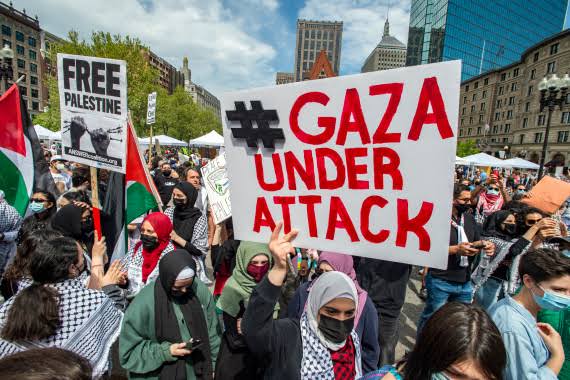 Palestinians hold hands and burn tires as they demonstrate against the latest tensions in Jerusalem and the occupied West Bank as well as the bombing of the Gaza Strip by Israel, on May 16, 2021, near the settlement of Beit El not far from Ramallah.

Kenya has joined the United Nations Security Council (UNSC) in calling for diplomatic negotiations to achieve a solution to the escalating violence in Israel and Palestine.

The country, in the latest call for both sides to lay down arms, is warning that the resurgence of violence between Israel and Palestine will make it harder for them to reach a two-State solution.

In a statement delivered to the UNSC on Sunday evening, Dr Martin Kimani, Kenya’s Permanent Representative to the UN, warned violence was likely to produce generations angry with each other, making it difficult to address causes of the conflict.

Dr Kimani spoke during a virtual, open-debate session of the council on the Middle East, with focus on the situation in Gaza, Tel Aviv and Jerusalem.

He said the country is opposed to illegal settlement activity in the occupied Palestinian territory and called for an immediate ceasefire and cessation of violence, as the first step to a renewed push for peace.

The envoy also said the escalation of violence in Jerusalem, Tel Aviv, West Bank and the Gaza Strip was – apart from taking lives – reversing progress toward the ultimate aim of a permanent and secure peace.

“We are concerned that this latest bout of violence, and particularly its touching on religious sites, will fan extremism and hatred, and that this will lead to the further erosion of the moderate middle ground on which the tough compromises required for lasting peace can be made,” Dr Kimani said.

He noted that Kenya condemns violent rioting, and the exploitation of such popular anger by extremist groups.

Demonstrators take part in a protest against Israel’s attacks on the Palestinian Gaza Strip, in Islamabad on May 16, 2021. (Photo by Farooq NAEEM / AFP)

The envoy further said that in highly emotive situations, police and military authorities should embrace de-escalation, protect lives and avoid the demolition of civilian infrastructure.

“Kenya supports all ongoing international and regional efforts for peace. We call for community leaders, the business community and the civil society in Israel and Palestine to be heard speaking up for ceasefire and dialogue.”

Dr Kimani further said Kenya supports the efforts of China, Norway and Tunisia for the issuance of a timely, clear and balanced statement by the Security Council that can help de-escalate the violence and support a push for a return to peace mediation.

Kenya wants the dialogue and negotiations to be guided by the council’s Resolution 2334, and Dr Kimani says that it is important that the agreed Status Quo on Jerusalem be respected.

The council’s resolution 2334, passed in 2016, calls on Israel to “immediately and completely cease all settlement activity in the Occupied Palestinian Territory, including East Jerusalem” and to “fully respect all of its legal obligations in this regard”.

Two Palestinian militant groups – Hamas and Palestinian Islamic Jihad – on May 10 fired rockets into Israel from the Gaza Strip, hitting multiple residences and a school.

Since May 10, Israeli air and artillery strikes on Gaza have killed 145 people including 41 children. Palestinian armed groups have fired at least 2,300 rockets at Israel.

UN Secretary-General Antonio Guterres on Saturday said he was “dismayed” by civilian casualties in Gaza and “deeply disturbed” by Israel’s strike on a building containing the international media outlets.

But Israel claims it is hitting at Hamas, which it accuses of firing rockets at it.

“The enmity that produces the kind of violence occurring today only begets more violence, and more generations born into enmities whose roots are too ancient to uproot,” Dr Kimani told the session.

“This dark moment calls for a renewed vision of peace, built on the insight that the present course only leads to further destruction of lives and hope.” 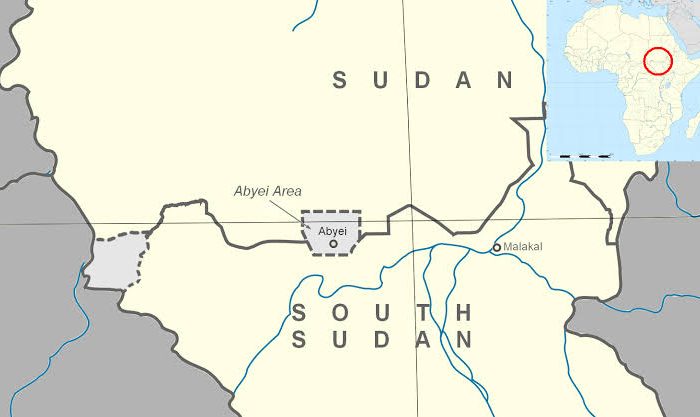 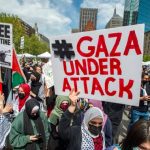