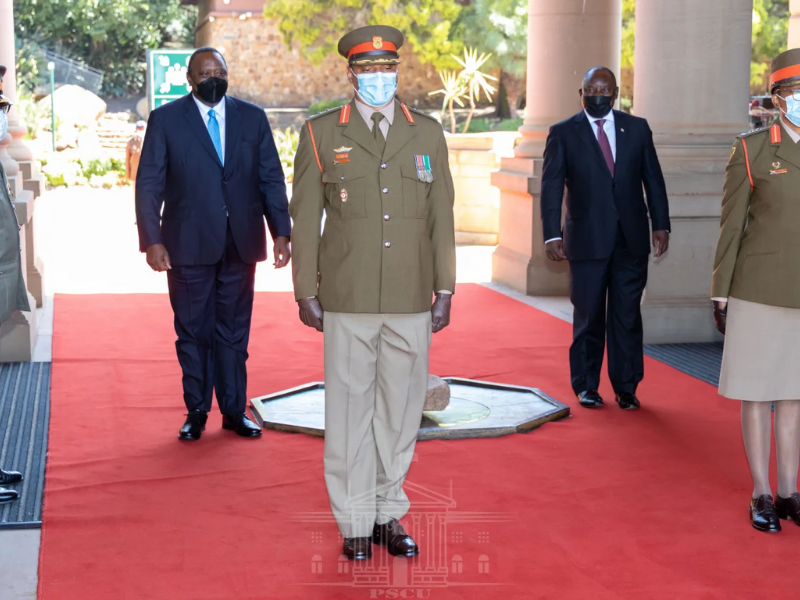 President Uhuru Kenyatta and President Cyril Ramaphosa observed the signing of the agreements immediately after they led their teams in bilateral negotiations at Union Buildings in Pretoria, the official seat of the South African Government.

The eight agreements comprised MoU’s in transport, health, diplomatic discussions and training as well as tourism and migration.

Others included a Bilateral Air Services Agreement (BASA) as well as MoU’s on Government Printing Works and the repatriation of nationals denied admission and unlawful immigrants.

Addressing the press following the signing ceremony, President Kenyatta said the Kenya-South Africa diplomatic partnership of close to 30 years had come of age.

“In addition to strong bilateral ties which encompass a broad range of fields, Kenya and South Africa are close partners at the regional and global stage,” said President Kenyatta, on the second day of his three-day State Visit to the Southern Africa nation.

President Kenyatta, once again, underlined Kenya’s commitment to cooperate with South Africa in furthering the ambitions of the people of the two nations via the promotion of the African agenda.

“…you will agree with me that it is only through working together that we can accomplish the necessary goals for deeper bilateral cooperation and strategic alliances. We have clearly made excellent strides. However, there is headroom to even go better,” President Kenyatta remarked.

At the same time, President Kenyatta thanked President Ramaphosa for his exceptional leadership during his stint as chairperson of the African Union last year.

“The Africa Bureau that you chaired, and which I was fortunate to be a part of, produced the Africa Joint Continental Strategy for COVID-19 which continues to lead our effective response to the epidemic to date,” President Kenyatta remarked.

The Kenyan leader added praised his South African colleague for the assistance that allowed Kenya to join the United Nations Security Council as a non-permanent member for the term 2021 to 2022.

On his part, President Ramaphosa said President Kenyatta’s Status Visit has offered a chance to take stock of the existing state of bilateral ties and explore new areas of common interest and value for the people of the two countries.

Saying South Africa owed a debt of gratitude to the people of Kenya for the unflinching support throughout the battle for its liberation, President Ramaphosa highlighted the need to raise the two countries’ relations to a strategic partnership.

“President Kenyatta and I have emphasized the strategic significance of bilateral ties between our two nations and restated our intention to raise the nature of the partnership, which would entail the completion of a Strategic Partnership Agreement,” the South African President added.

Earlier, President Kenyatta was officially met by his host President Ramaphosa in an elaborate state event that featured a 21-gun salute, a military ritual reserved for Heads of State and Government.

Thereafter, President Kenyatta was asked to see a guard of honor erected by a contingent of the South African military before he headed for one-on-one meetings with President Ramaphosa. 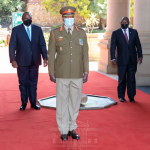