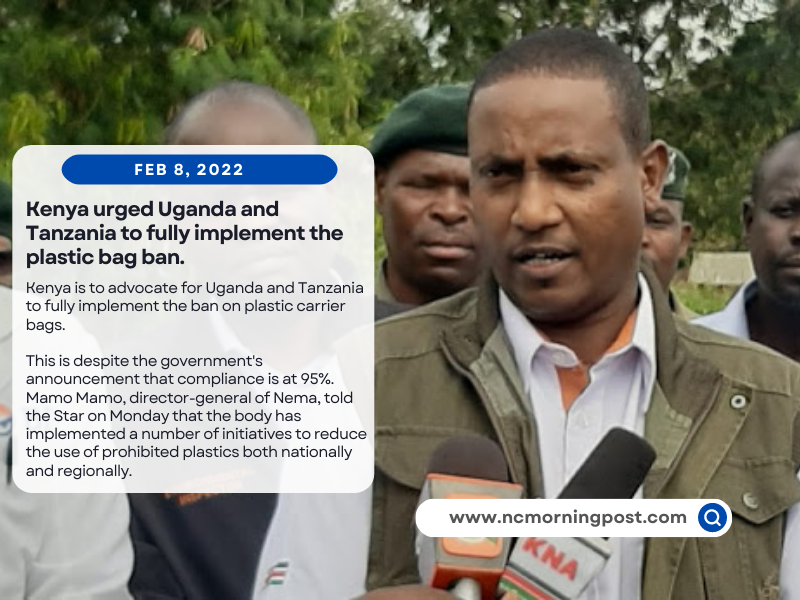 Kenya is to advocate for Uganda and Tanzania to fully implement the ban on plastic carrier bags.

This is despite the government’s announcement that compliance is at 95%. Mamo Mamo, director-general, of Nema, told the Star on Monday that the body has implemented a number of initiatives to reduce the use of prohibited plastics both nationally and regionally.

Mamo said that the regional ban will be enforced with the assistance of the Director General’s Forum from three East African nations.
“We are resurrecting this forum in order to discuss environmental concerns.” This is due to the fact that environmental concerns are transboundary, ” Mamo said, adding that the forum being resurrected has been dormant for some time.

According to Mamo, the DGs of Kenya, Uganda, and Tanzania would spearhead these initiatives in their respective nations.

Following that, we would be able to extend to all Eastern African nations, he said.

Kenya’s tough stance on plastic pollution comes only weeks before the UN General Assembly’s fifth session begins.
From February 28 to March 2, the assembly will be held in person and online at the UN Environment Programme (UNEP) headquarters in Nairobi, Kenya.

The assembly will consider the formation of an international negotiating committee. The group will begin work on a worldwide, legally enforceable pact to combat plastic pollution.

Given the magnitude and scope of the global plastic pollution issue, the debates might be the most significant advance on the global environmental agenda since the Paris Climate Agreement in 2015.

The conversations will take place between member countries, as well as with the commercial sector, civil society, and other parties.

Other essential topics to be addressed by the assembly include nature-based solutions and biodiversity, green recovery and circular economy, and nitrogen control.

Kenya’s Environment Ministry issued a gazette notice on February 27, 2017, prohibiting the use of plastic carrying bags.

In August of that year, the prohibition went into force.
Possession of plastics carries a fine of between Sh2 million and Sh4 million, as well as a prison sentence of one to two years, or both.

Prior to 2017, around 100 million plastic bags were used in Kenyan shops each year, with serious environmental repercussions. In 2017, for example, a Nema-supported study found that more than half of livestock had ingested plastics.

According to a study conducted in Dagoreti, Kiserian, and the Kenya Meat Commission, affected livestock was weak, with lower milk and beef production. According to the administration, the prohibition would help safeguard the environment and raise living conditions.

Despite the prohibition, plastic bags continue to be smuggled into the nation. The polymers are thought to have originated in Tanzania, Somalia, and Uganda.

Mamo previously warned the Star that various types of plastics were becoming one of our generation’s worst disasters and a serious danger to biodiversity.

Mamo said that Nema is working closely with county governments at the national level to ensure that the prohibited plastic carrier bags are handled.
“We have built a structure of a corporation with the Council of Governors on the devolved environmental functions of solid waste management, noise pollution, and air pollution,” he said.

Mamo said that Nema has already gazetted over 100 environmental inspectors for the county government in order to assist the authorities in enforcing the prohibition.
“We have also brought on board market supervisors from different county administrations, particularly in big cities.” “They will work with us to ensure that prohibited plastics are removed from marketplaces,” he added.

According to Mamo, the authority has also created an Environmental Performance Index. The tool will assess how counties perform in terms of environmental characteristics such as pollution management, including the use of prohibited plastic bags, environmental governance, and garbage collection.

According to the DG, the Environmental Management and Coordination Act No. 8 of 1999 (EMCA) would be revised via a bill. This would guarantee that counties are given clear mandates for carrying out devolved environmental tasks.

“The gaps are a reaction from the counties to implementing the plastic ban and ensuring we work under multi-agency teams,” he said.
Mamo said that the authority has established a coordination framework to improve collaboration among various parties.

County governments will be included so that the plastic bag ban may be enforced at the county level. 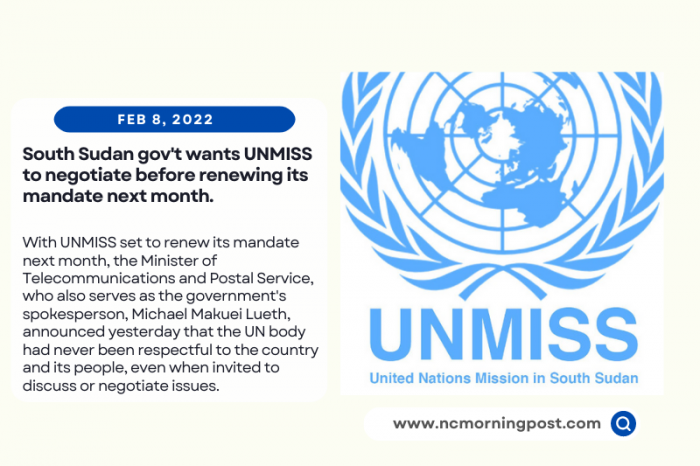 South Sudan gov't wants UNMISS to negotiate before renewing its mandate next month. 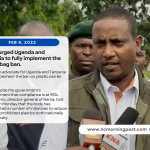