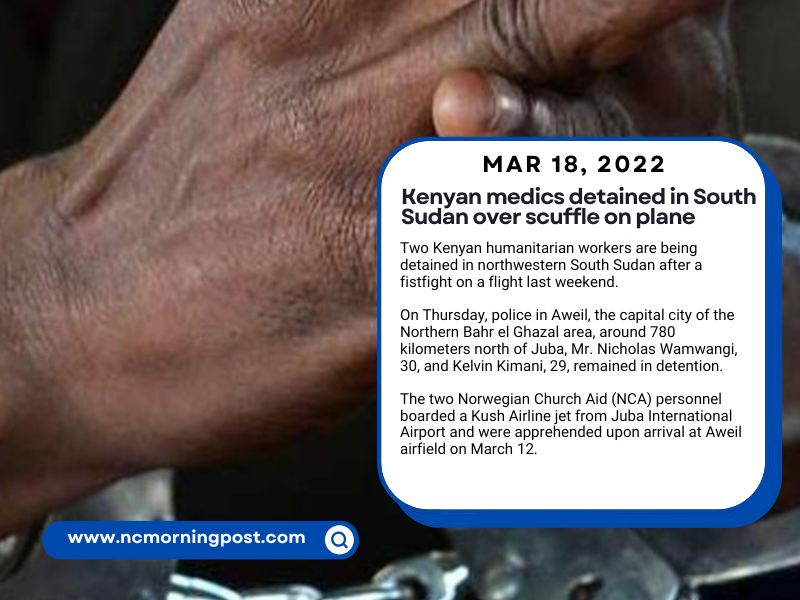 Two Kenyan humanitarian workers are being detained in northwestern South Sudan after a fistfight on a flight last weekend.

On Thursday, police in Aweil, the capital city of the Northern Bahr el Ghazal area, around 780 kilometers north of Juba, Mr. Nicholas Wamwangi, 30, and Kelvin Kimani, 29, remained in detention.

The two Norwegian Church Aid (NCA) personnel boarded a Kush Airline jet from Juba International Airport and were apprehended upon arrival at Aweil airfield on March 12.

“The two aid workers, who are thought to be gynecologists, were detained on Saturday last week,” stated Captain Guot Guot Akol, the police spokesman for Northern Bahr El Ghazal.

“According to one of the passengers, they began fighting as the Kush Airlines jet departed Juba and continued until it arrived in Aweil, when they battled again in front of authorities at the airfield.”

Five days later, investigators say it’s still unclear what prompted the exchange of blows that created alarm among passengers on board, prompting the airline crew to notify police and aviation authorities.

“We haven’t heard back from the organization that sent them.” “However, we have examined their paperwork and forwarded them to Interpol, who will now investigate the matter in partnership with our Immigration Department,” Captain Akol said.

“However, on Wednesday, the chairman of the Kenya Association came to us, and he is following the situation amiably,” he continued, without going into more detail.

According to the spokesperson, police have now determined that the two suspects were inebriated during the mid-air fistfight.

Norwegian Church Aid is a humanitarian and ecumenical organization located in Norway, with headquarters in Oslo.

It was once associated with the state church of Norway but is currently self-contained.

“Norwegian Church Aid works with individuals and organizations all over the globe in their fight to end poverty and injustice,” the organization’s website states.

“We assist people in need, regardless of nationality, religion, political or religious affiliation.” 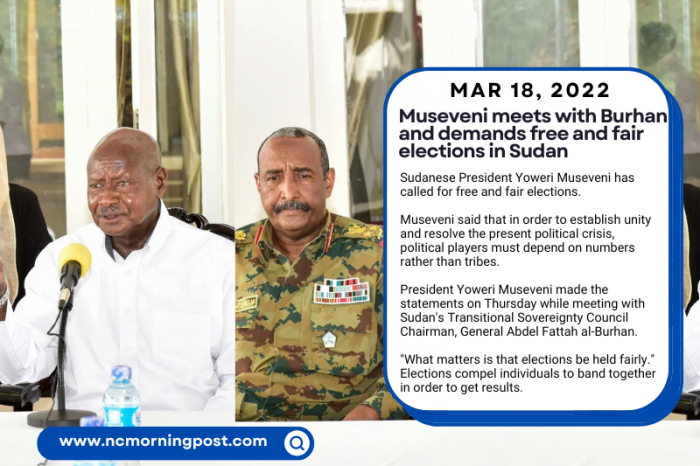 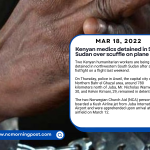