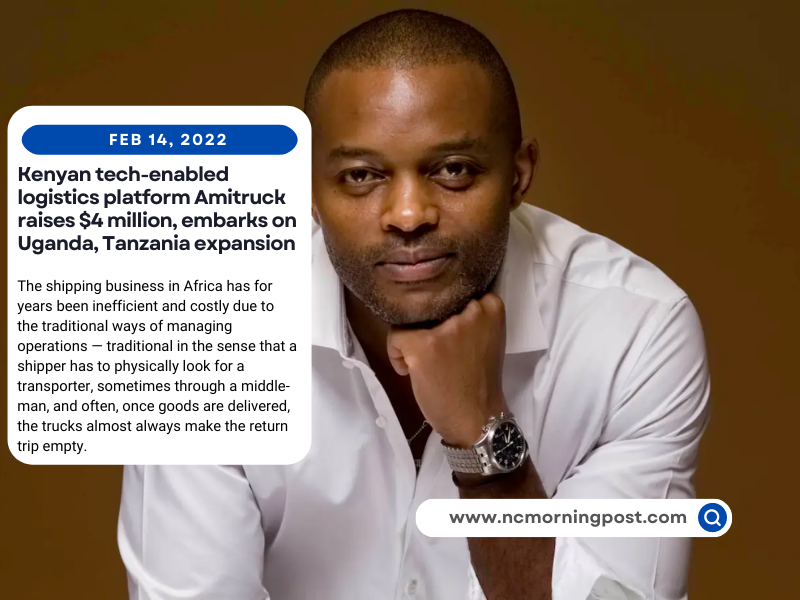 The shipping business in Africa has for years been inefficient and costly due to the traditional ways of managing operations — traditional in the sense that a shipper has to physically look for a transporter, sometimes through a middle-man, and often, once goods are delivered, the trucks almost always make the return trip empty.

For a continent like Africa, where roads are heavily used to ferry goods, any inefficiencies encountered translate into higher prices of goods for the end-customer. However, over the last decade, tech solutions are emerging to bring efficiency into the sector and make shipping cheaper, while increasing the availability of options for shippers.

Amitruck, a Kenyan tech-enabled logistics platform, is one such provider of solutions that streamline the shipping market. The startup, which has achieved a great take-off in Kenya, is set to strengthen its technical, operations, and sales teams to lay the groundwork for its entry into Tanzania and Uganda, after raising $4 million in seed funding (bringing the total funds raised to date to $5 million). The expansion plans come as it looks to be the regional go-to platform for shippers and transporters doing in-country and cross-border business.

“The most important purpose of this round is hiring. We are also improving our technology as we start our expansion into other countries in Africa, “Amititruck founder and chief executive officer Mark Mwangi explained in a TechCrunch publication seen by NCMP.

BTV’s general partner, Jake Gibson, said, “As an investor in a unicorn CloudTruck startup here in the U.S., we have in-depth knowledge of the operational and financial requirements of truckers.

“While the trucking and logistic business in Africa has grown tremendously over the years, the pace of innovation particularly in its administration has been slow. Amitruck’s solution is ideal for bringing the industry into the 21st century,” he said.

Launched in 2019 as a digital logistics marketplace, Amitruck connects shippers with transporters operating trucks, vans, tuk-tuks (three-wheelers), pickups and motorbikes, allowing them to negotiate the rates of haulage. The platform also lets shippers customize services, for example, to add off-loading charges. The platform includes a transporter’s rating and the mean number of trips made, data that helps shippers narrow down their choices. The process begins once both parties reach an agreement.

“Amitruck connects shippers directly with transporters and provides a platform where you can get secure, competitively priced transport,” said Mwangi.

“In an informal setting, you can have up to three middlemen between a transporter and the cargo owner or shipper. And these guys can cause several problems; including claiming up to 60% of the delivery fee, and if something happens to your load (loss or damage), it’s very difficult for you to get compensated. For shippers, it is very hard for them to compare the quality and level of service they’re going to get. So, it’s quite manual, tedious and very difficult to know who’s good [at what they do] and who’s not.”

Some of Amitruck’s more than 300 B2B customers in Kenya include FMCG firm Unilever, L’Oréal, a beauty company; SkyGarden, an e-commerce platform; and Twiga, a fresh produce marketplace. They also work with individual customers, who are, for example, moving houses.

The goods being transported by Amitruck’s partners are insured. Besides, the startup provides operational support.

“We’re a one-stop-shop. When you connect with us, you literally offload the headache of transport,” he said.

Mwangi, a former investment banker, wasn’t always in the logistics sector, except for the period when, following the demise of his father, he had to take up a night job driving trucks to pay his tuition fee at the City University of London, where he pursued a degree in mathematics.

Thereafter, he joined Bluecrest Capital Management, a British-American hedge fund, as part of the executive team involved in the operations of a number of private holdings in Canada, Ecuador, and China. He later left for the Pictet Asset Management firm, where he rose through the ranks to become an equity portfolio manager, a position he later left in 2017 to pursue entrepreneurship.

By the time I was leaving Pictet in 2017, I was part of a team of four running a €5 billion ($5.6 billion) portfolio, but then I wanted more out of life. I wanted to build something, I wanted to do something more meaningful with an impact, and so I stepped down. On my visit home, I was talking to a family friend… and the gap in trucking just seemed so obvious, “said Mwangi. 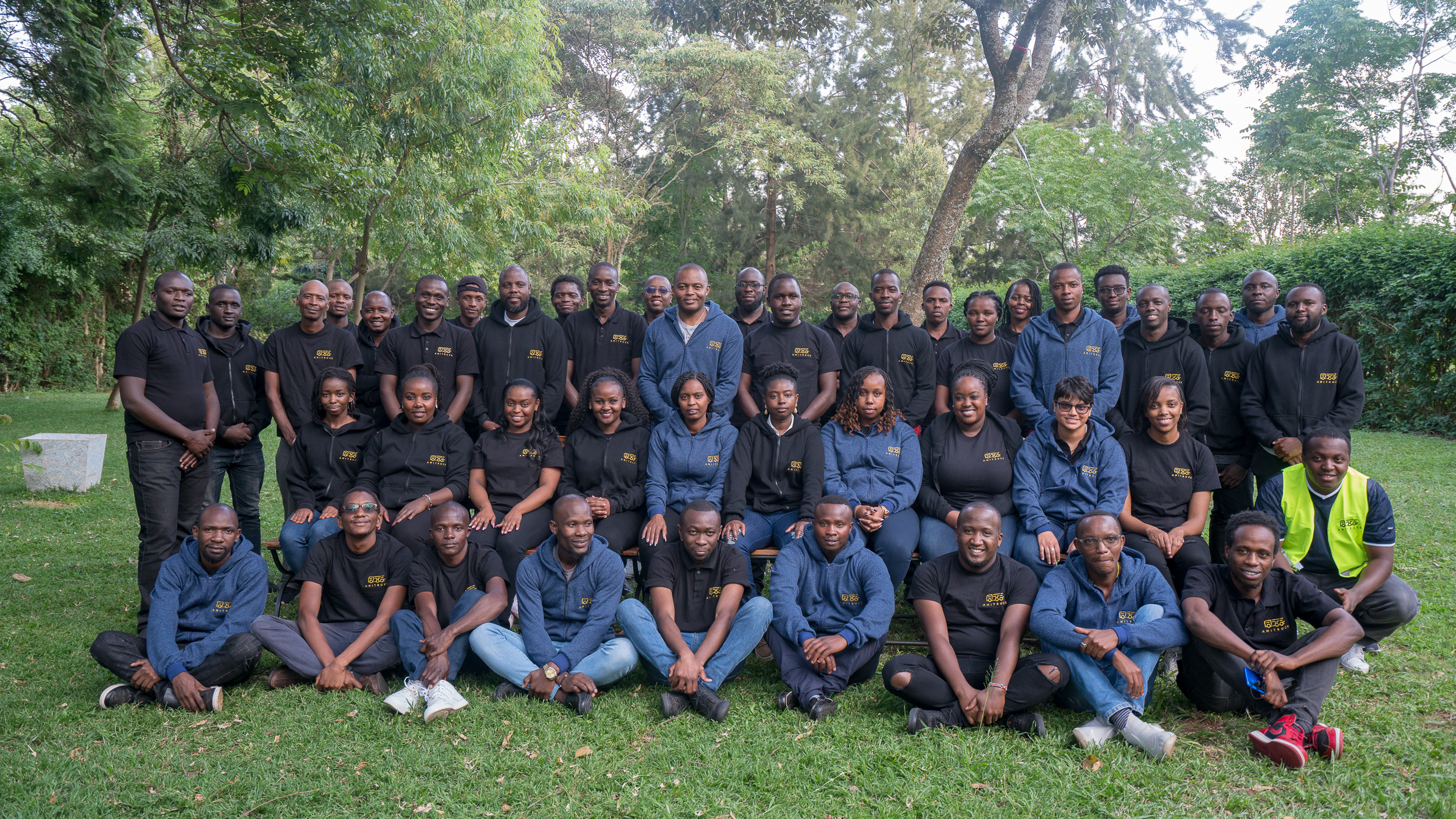 Mwangi is optimistic about the future, saying that the logistics sector offers enormous opportunities to companies like his, which are trying to bring order to the industry. On his journey, he has to deal with competition from other startups like Lori Systems and Sendy, platforms that started out in Kenya before expanding to other countries within Africa, and kobo360, which is headquartered in Nigeria.

Amitruck has more than 8,000 vehicles registered on its platform, and Mwangi says the company’s revenue grew by 1,000% in 2021, from 400% in the previous year, as COVID made apparent the need to digitize supply chain processes. Last year, the startup participated in the JICA-backed Ninja Accelerator program and was also accepted into AbInbev’s Budstart Accelerator program and the Google-backed Black Founders Fund Accelerator, which provides non-dilutive capital.

“The opportunity is massive. The majority of this market is still controlled by the middlemen. Followed closely by our customers’ own vehicles. In Africa, 99% of goods have to use a vehicle of some type. We really don’t use that much in terms of waterway or air. And at the moment, it can cost up to five times more than it does in more developed markets to move those goods,” said Mwangi.

Africa’s transport and logistics sector is expected to grow massively especially after the implementation of the already signed African Continental Free Trade Area (AfCFTA) which will make the continent the largest single market in the world. 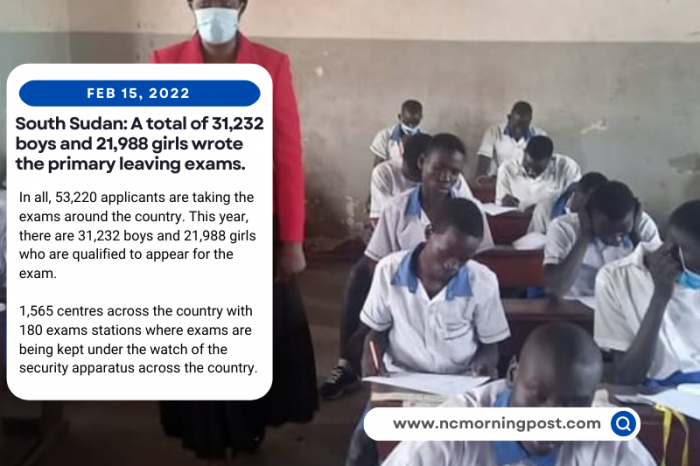 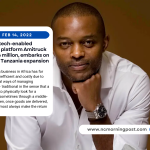