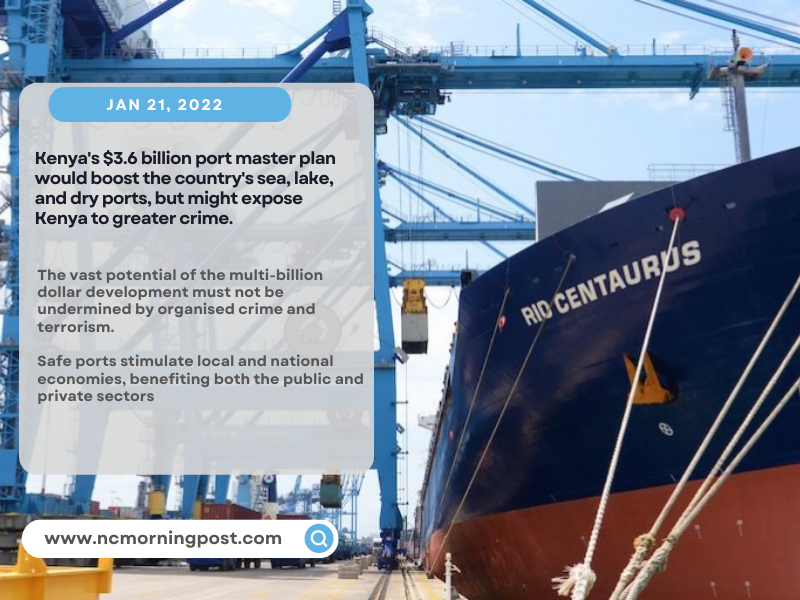 Over the next 30 years, Kenya’s $3.6 billion port master plan will enhance the country’s sea, lake, and dry ports.

Modern ports that adhere to International Maritime Organization (IMO) rules attract a larger shipping market, which might strengthen and maintain Kenya’s and the region’s economies.

These growths, however, bring with them security problems, most notably organized crime and terrorism.

The new Lamu Port is the Kenya Ports Authority’s (KPA) flagship project, with an initial expenditure of US$2.1 billion. The Lamu Port-South Sudan-Ethiopia-Transport (LAPSSET) Corridor Project includes seven massive infrastructure development plans. This $25 billion initiative is part of Kenya Vision 2030, which intends to develop Kenya into a middle-income economy.

Lamu Port is a transshipment point to major seaport hubs such as Djibouti, South Africa, and the United Arab Emirates. Transshipment ports are locations where products are transferred from one ship to another for conveyance to other locations.

Lamu is near the Somalia border, where al-Shabaab has a stronghold. The terrorist organization is infamous for targeting state infrastructure, causing property damage, and instilling fear in local populations. This was proved in January 2020 when it attacked the Manda Bay military installation in Lamu, killing three American defense personnel and damaging US planes and equipment.

Due to security concerns, Kenya halted commerce with Somalia at the Kiunga border post in 2019.

Al-Shabaab works with transnational organized crime organizations and engages in organized criminal activities to support its operations and terror campaigns. For example, the gang is said to transport legal goods like sugar, deal in illegal weaponry, and participate in human trafficking, including recruiting drives in Kenya.

Kenya’s government prohibited commerce between Kenya and Somalia through the Kiunga border crossing in 2019 and closed its border with Somalia owing to security concerns. The restrictions were also intended to combat syndicates engaged in illicit fishing, human trafficking, contraband commodities, and “terror merchants.” Despite the government’s attempts to stimulate commerce in Lamu via the Kiunga border crossing, evidence of organized crime around the port remains.

Although piracy has decreased off Africa’s east coast, an “increase in shipping traffic owing to the Lamu Port may spark interest in ship hijacking — a crime al-Shabaab has been indirectly linked with in the past,’ an unidentified maritime security specialist told the ENACT organized crime project.

Safe ports assist both the public and corporate sectors by stimulating local and national economies.

Local frustrations may make Lamu Port more vulnerable to infiltration by organized crime and terror organizations. Historical marginalization of communities, as well as contemporary official abuses in the war on terror, such as arbitrary murders and enforced disappearances, have sometimes targeted Lamu residents. Al-Shabaab takes advantage of such circumstances to recruit recruits from Lamu.

Aside from its ties to terrorist organizations, Lamu was recognized as a drug trafficking hub in 2018. The port, which connects to South Sudan and Ethiopia, provides a chance to increase drug trafficking to markets in northern Kenya and other East African countries. Lamu Port, as well as other LAPSSET infrastructures like the Juba–Addis Abeba railroad and Kenya’s Isiolo Airport, are susceptible to trafficking in minerals, animals, and endangered tree species such as teak.

According to port security experts, port stakeholders and users have formed Border Management Committees that bring together relevant government departments. They concentrate on marine security issues in Lamu, such as the smuggling of illegal products and the nexus between human trafficking and terrorism.

The committees’ goal is to offer a coordinated response between the KPA and other state agencies, such as the police, Kenya Coast Guard Service, Immigration Department, and Kenya Revenue Authority. The Border Management Committees have also included Lamu’s local communities in order to boost information collecting and public engagement in security decisions.

Kenya was recently removed from the IMO’s pirate red list as a result of its efforts to combat the issue.

However, KPA chief of security Tony Kibwana observes that the lack of a KPA integrated marine security policy and strategy impedes inter-agency responses to organized crime, particularly at younger ports like Lamu. The maritime strategy is in the works, and it will increase the KPA’s collaboration with government agencies such as the Kenya Coast Guard Service and the Kenya Navy to counter off-shore transnational marine threats.

Safe ports assist both the public and commercial sectors by stimulating local, national, and regional economies. It is critical to secure ports against transnational organized crime, and recent events show that Kenya is taking steps to defend its maritime environment. Due to its accomplishments in combating piracy, the nation was recently removed off the IMO’s piracy red list.

An immediate and beneficial result of this is lower insurance and security costs (by millions of dollars each year) for those who use Kenya’s ports. This is consistent with the purpose of the KPA Master Plan 2018-2047 of making Kenya an appealing and competitive transshipment and destination hub on Africa’s East Indian Coast. 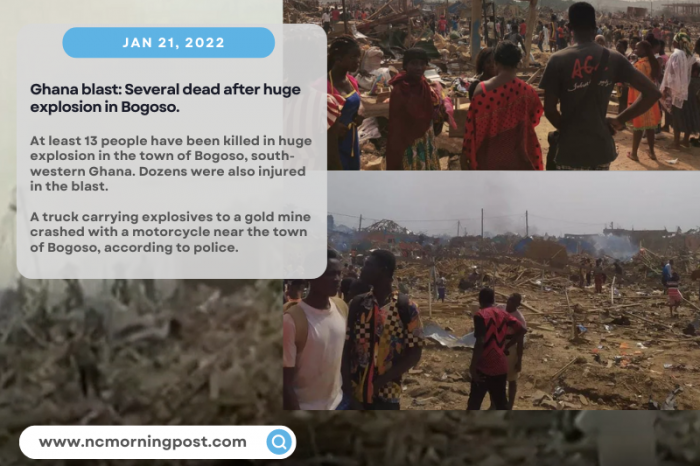 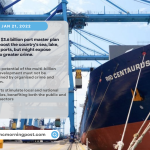