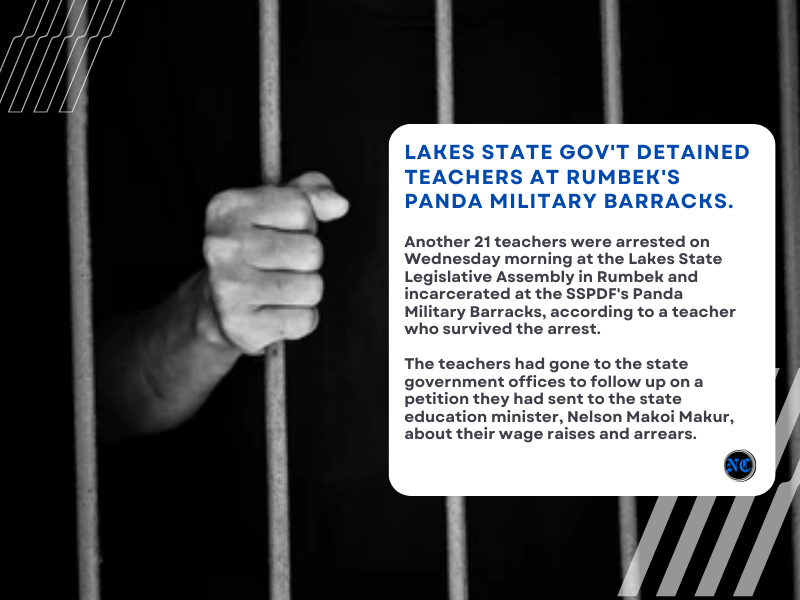 Another 21 teachers were arrested on Wednesday morning at the Lakes State Legislative Assembly in Rumbek and incarcerated at the SSPDF’s Panda Military Barracks, according to a teacher who survived the arrest.

The teachers had gone to the state government offices to follow up on a petition they had sent to the state education minister, Nelson Makoi Makur, about their wage raises and arrears.

A teacher, whose identity has been kept for fear of retaliation, explained on Wednesday afternoon that they had gone to find out about their pay and why their other colleagues had been jailed.

“What occurred today at 9:30 a.m. was that we mobilized as teachers to go and recover our January and February wage increments and arrears, and to find out why our teaching colleagues were imprisoned three days ago,” he stated. “We were on our way to the parliament when two SSPDF trucks arrived and sealed the gate, arresting 21 of the teachers.”

“I was the only instructor who escaped arrest because I moved to the other side of the road and they ignored me,” he said.

Despite threats, harassment, and arrests by the state government, the instructor said that they would not give up their rights.

“We will not give up our rights to the Lakes State administration as a result of the SSPDF’s harassment, arrest, and torture of teachers,” he continued. “We will continue to demand full payment of our wage arrears until we get them.”

According to the instructor, Makur Nyot, one of the 21 teachers jailed on Wednesday, talked to the media on Monday when their colleagues were detained.

“He (Nyot) was transported away alone in a separate military vehicle to an unknown place, and he will not be safe from torture by the SSPDF,” he claimed.

Daniel Laat Kon, the Lakes State coordinator for the Community Empowerment for Progress Organization (CEPO), verified the arrest of the 21 teachers on Wednesday at the gates of the Lakes State parliament.

“Six teachers were held at the Ministry of Education gate, 12 instructors were arrested, and 21 teachers were picked up today at the Parliament entrance” (Wednesday). “This takes the total number of detained teachers to 39,” he stated.

Laat requested the state governor to free the teachers and refund their back wages with the authorized 100 percent raise.

Machok Bol, a Lakes State member, said that the 21 teachers were detained at the doorway of parliament while everyone present was watching.

“That is correct. “The 21 teachers were coming to follow up on their petition on wage arrears when they were detained this morning (Wednesday) at the entrance of Lakes State assembly,” he added. “These instructors were taken beyond police custody and detained at the Panda Military Barracks.”

He said that the speaker of the state legislature and her deputy informed the house that they would follow up with the executive on the problem and that the house would be brief the following week.

“My message to the administration is that those teachers are not criminals who should be held in military camps.” They must be escorted to the police station for an inquiry and then to court if the case is not settled,” Bol said. 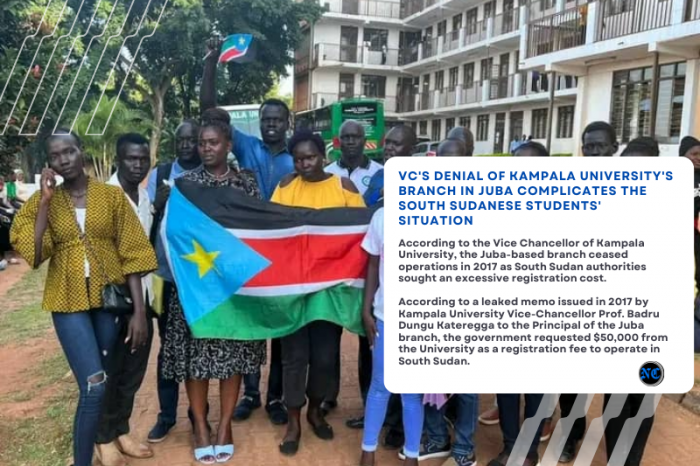 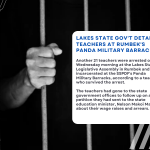