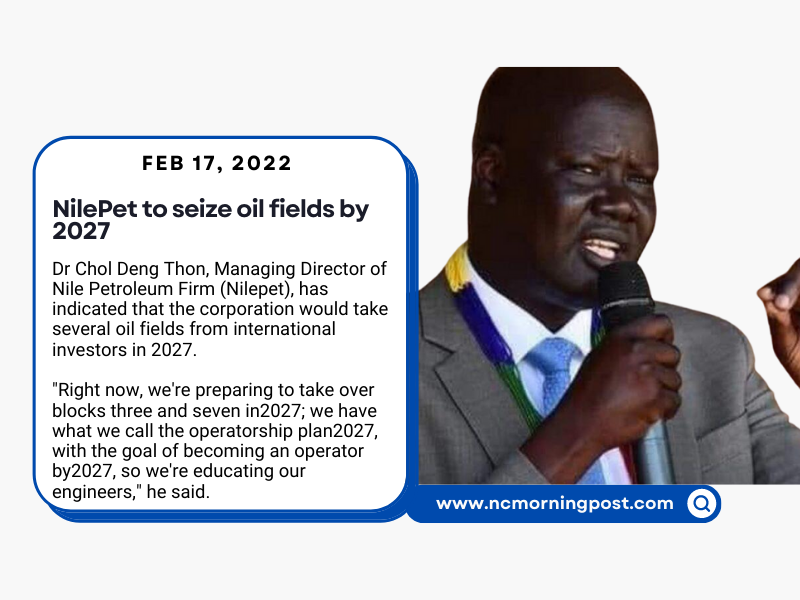 Dr Chol said in an interview with Miraya FM, which was broadcast on various platforms, that certain international investors’ contracts will expire in 2027, leaving the oil fields in the hands of the dominant government firm. The first oil field, he said, will be in Paloch, Upper Nile.

“As the national oil corporation, we have the mandate to take over the industry once the existing investors go.” “The first blocks to return are blocks three and seven, which will return in 2027,” Dr Chol stated.

He said that they were ready to be operators by training engineers for the operation.

“Right now, we’re preparing to take over blocks three and seven in 2027; we have what we call the operatorship plan 2027, with the goal of becoming an operator by 2027, so we’re educating our engineers,” he said.

The nation has been experiencing intermittent fuel shortages, which has led to skyrocketing commodity prices, raising the threshold for living standards even higher.
As part of its strategic plan 2017–2027, President Salva Kiir Mayardit asked Dr. Chol to expedite the building of a refinery to prevent the nation from experiencing a gasoline crisis in January 2021.

“Dr. Chol Deng Thon Abel, Managing Director of Nile Petroleum Corporation, informed His Excellency President Salva Kiir Mayardit on Nilepet’s operations in his office.” According to the release, “Dr. Chol also updated H.E. the President on the status of continuing Nilepet project execution according to its strategic plan for 2017–2027.”

The strategic plan calls for pipeline development, road rehabilitation from oil fields to refineries, and the construction of fuel storage plants in all 10 states and three administrative districts.

The route from the oil fields to the refinery began in October last year, from Wunrock to Bentiu oil fields, but was halted by floods.

After reviewing the refinery in October last year, the previous managing director, Bol Ring Muorwel, said that it was critical to build a route from the oil field to the refinery as soon as possible.

“Rain and floods throughout South Sudan have greatly hampered our effort to build a road to the refinery, but as we near the conclusion of the rainy season, road work will continue, guaranteeing that refined goods reach the market inside and outside our borders,” Ring said.

The previous Nilepet CEO said that the refinery will assist to reduce prices, reduce fuel shortages, and reduce reliance on neighboring nations.

“Gasoline shortage will be a thing of the past if the local refinery becomes the primary fuel supply center in South Sudan.” “The refineries are important not just for bringing money, providing currency, or stabilizing our economy, but also for helping to generate additional work prospects for thousands of young people in the nation,” he said.

He emphasized that instead of relying primarily on oil money, the government should revitalize its economy via fast industrialization, agricultural revolution, and freedom in many forms for economic stability. 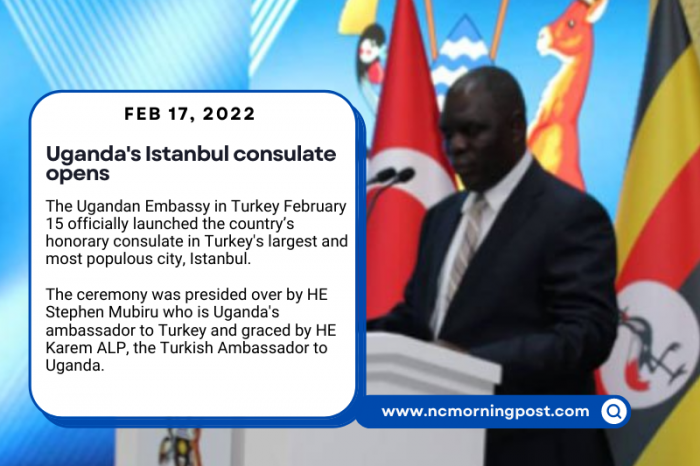 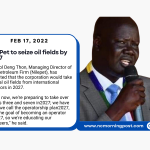