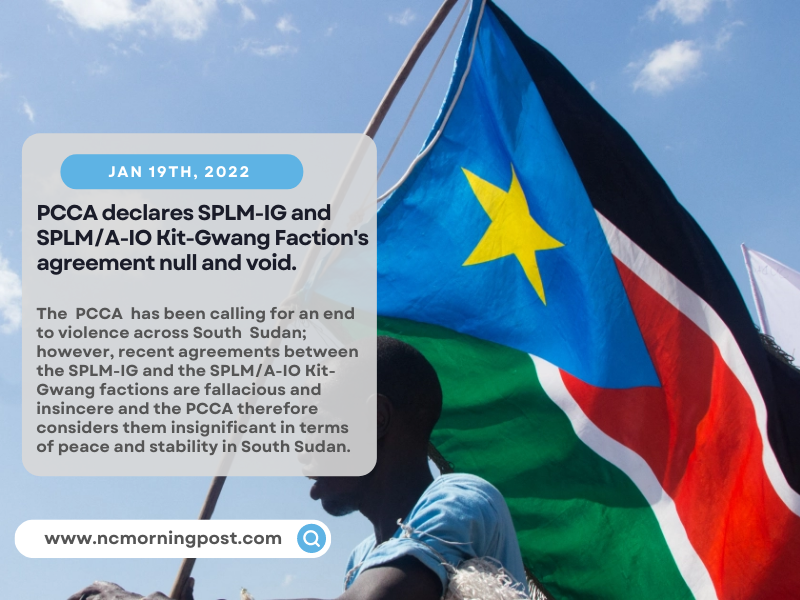 The   PCCA   has  been  calling  for  an  end  to  violence  across  South   Sudan;  however,  recent agreements  between  the SPLM-IG  and the SPLM/A-IO Kit-Gwang factions are fallacious and insincere  and the PCCA  therefore considers them insignificant in terms of peace and stability in South  Sudan. The  PCCA  came  to this conclusion  based  on the following:

First, the  agreements have  no  legal basis as far as the  current political  architecture in  South Sudan  is concerned.  For one thing,  the  SPLM-IG  is a non-existing  entity,  and  it therefore has no  power  to  represent  the  state.  The  legal  entity  with  the  state  authority  and  power  is  the Revitalized  Transitional Government of National Unity  (RTGoNU), an entity created by the R• ARCSS.  If the Kit-Gwang factions wanted  to sign agreements  with one faction of the RTGoNU, the legal faction is the TGoNU, a signatory to R-ARCSS. The  SPLM-IG  is not a legal entity as far as the R-ARCSS is concerned.  These  agreements  are  therefore null and  void and  have  no force of law.

Second,  still  on  legality,  why  were  the   heads   of National  Security   Service  and   Military Intelligence  allowed  to  sign  on  behalf  of the  SPLM? Both  men  represent non-partisan state institutions  and under no circumstances should they represent a political party. Their  signatures to these  agreements,   on behalf  of the  SPLM–IG, is a colossal error  ofjudgement. They  have degraded and branded these national institutions  as partisan armed  wings of the SPLM. It is now evident that elections and other politically contentious matters cannot  be entrusted to state armed institutions. Furthennore, President  Kiir’s  Republican Decree  #  27/2021  prohibits  “all active officers   and   non-commissioned   officers  (NCOs)   in  South   Sudan   People’s  Defense  Forces

(SSPDF) and all the Other Regular Forces from participating in politics”.  What are these officers doing in representing the  SPLM?

Third, it is apparent to all that  the SPLM/A-IO Kit-Gwang factions, had  no quarrel  with the SPLM, their grievances were against the leadership ofthe SPLM/A-IO under  Dr. RiekMachar. What  disputes  were being  resolved  between the  SPLM-IG and  the  SPLM/A-IO  Kit-Gwang factions? These  agreements would only make sense if they were inter-SPLM/A-IO  agreements, negotiated and signed between the conflicting SPLM/A-IO factions inJuba and Kit-Gwang. As such, the agreement is politically calculated to confuse the public, degrade the position of SPLM/A-IO in the RTGoNU and eventually abrogate the R-ARCSS. The SPLM/A-IO Kit• Gwang faction just got bought and got cheated in a broad day light.

Fourth,  the Agreement between  the SPLM-IG and  Agwelek is  overreaching in  terms  of the issues being  addressed. The  disputes over Malakal  are not between  the SPLM-IG and Agwelek, they  are between  Chollo  and  Padang Dinka,  both  of which  were not  at the negotiating table. The parties  who signed this agreement on land  disputes have  no legal authority to negotiate  on behalf  of the  communities. As such, the  agreement is likely to raise  tensions  in  Malakal  and possibly fuel conflict.  As well, the parties  agreed  to give Agwelek some political positions  in the state government and in the counties. Representatives of the Upper Nile State were absent at the table,  so the  two  entities  have  no jurisdiction over Upper Nile  State  affairs  to reach  such  an agreement.

Fifth,  SPLM-IG and  Agwelek Forces agreed  to promptly integrate  the Agwelek forces to the South  Sudan  Defence Forces (SSPDF).  Such an integration increases troop  levels of the SSPDF and  therefore amounts to recruitment contrary to Article  2.3  of the  R-ARCSS in which  the parties agreed  to desist from recruitment of forces.  This blatant  violation  of the R-ARGSS  only confirms  the fact that  the TGoNU is deliberately  undermining and demolishing  the R-ARCSS.

Lastly, both agreements reference the R-ARCSS, yet the parties that have signed the R-ARCSS were entirely  absent  at the table. “Where does this agreement fit into the R-ARCSS without  the participation of its signatories?

In conclusion, the PCCA wishes to inform  the people of South Sudan that both the Kit-Gwang factions and  President  Kiir,  have betrayed  the interest of the people  of South  Sudan.  These  are politically expedient agreements  aimed at shoring-up  President  Kiir, who has failed the country, and to replenish  the accounts  of the warlords.

These  agreements  do not enhance  the chances of peace  and stability in our country, rather, they propagate continuing instability and uncertainty. If there is uncertainty and the country  remains insecure,  President  Kiir will continue  to cling to power.  Real peace lies with the people  of South Sudan,  but  they  must  unshackle  themselves  from  the  bondage   of warlords  and  self-centered economic  opportunists.

The  PCCA is a non-violent  prodemocracy civil rights movement, advocating for peace,  human rights,  and democracy in South  Sudan. 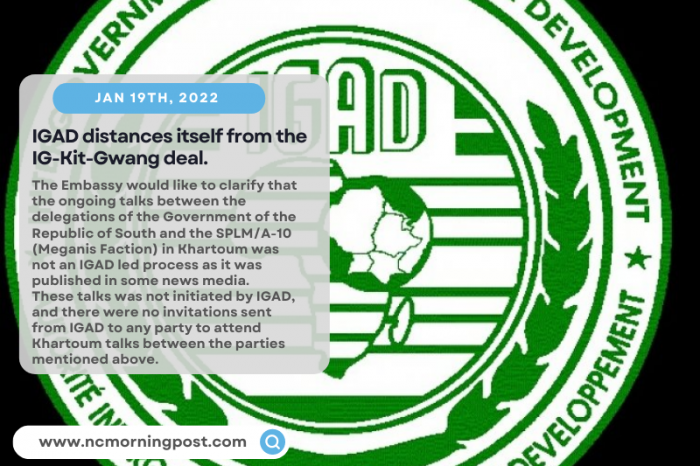 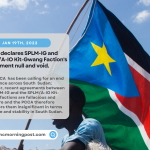