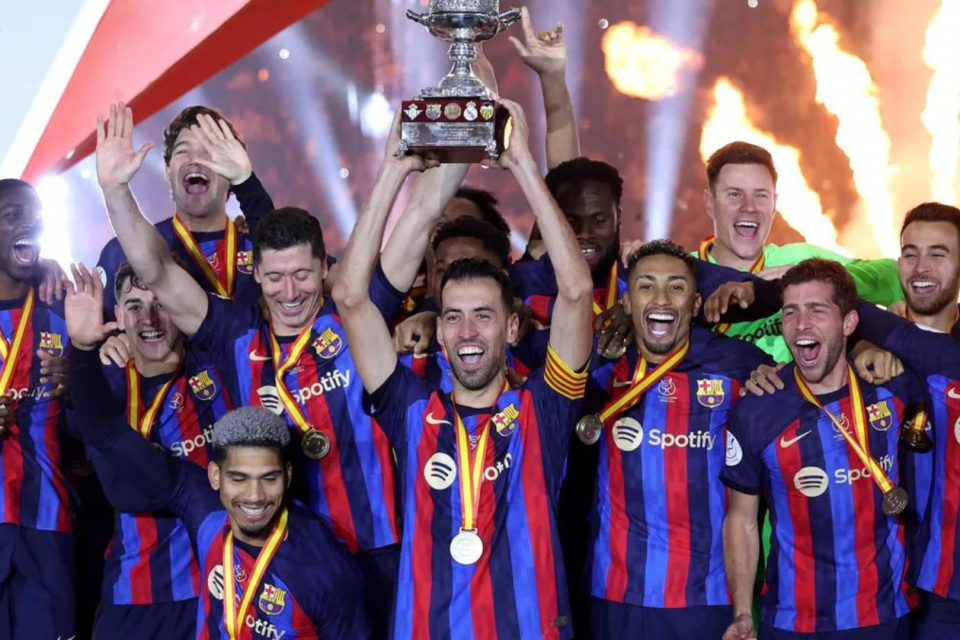 Gavi scored one and set up two more as Barcelona’s young stars dominated Real Madrid to romp their way to the Spanish Super Cup trophy with a 3-1 win.

The 2022 Golden Boy put his side in front with a cool finish just after the hour mark after Robert Lewandowski found him in the penalty area, then he turned creator on the stroke of half-time.

Frenkie de Jong pushed the ball through to Gavi on the left flank and the 18-year-old took his time before squaring for Lewandowski to tap home at the far post.

Midway through the second period, the margin was extended to three when Gavi was once more found by Lewandowski on the left and he crossed to the far post where Pedri was there to score.

In truth, the scoreline could have been wider as Thibaut Courtois tipped Lewandowski’s shot onto the post with the game at 0-0 and then denied Ousmane Dembele with a point-blank stop just into the second half.

Karim Benzema pulled a goal back in injury time, scoring at the second attempt after Marc-Andre ter Stegen saved his first effort with his legs, but the result was already confirmed long before.

TALKING POINT – ‘The past was yours, but the future’s mine

Stone Roses lead singer Ian Brown murmured this in 1989’s She Bangs the Drums and Xavi could have been forgiven for saying something similar to Carlo Ancelotti when the two shook hands at the end of the game. Real’s key triumvirate of Luka Modric, Toni Kroos, and Karim Benzema have led their side to continental dominance for far longer than they should have, but in this match, it felt like Real were old men playing a young man’s game. There was a moment in the first half when Barcelona put together thirty-odd passes dancing around the Real Madrid midfield with Pedri, Gavi, and Freddie de Jong passing and moving while interchanging with Sergio Busquets who must have had deja vu from his days under Pep Guardiola. Real may be able to lift one more time in the Champions League this year but the end of their most recent glory era is surely nigh.

PLAYER OF THE MATCH – Gavi (Barcelona)

The quality the 2022 Golden Boy award winner possesses is no mystery, but the reputations of players in this team are made in El Clasico and he created a memory in Saudi Arabia that will be remembered when his career is recounted many years from now. The cool finish put the game in his side’s favor and the perfect creation of the second all but decided it, before a near-carbon copy set up the killer third. There was far more to his game than this though. It seems inconceivable that after being lucky enough to have over a decade with Xavi and Andres Iniesta, Barcelona will be lucky enough to now enjoy Pedri and this young man for a long time now.

14′ COURTOIS TIPS SHOT ONTO POST! Lewandowski fired his usual low shot at goal which the Belgian keeper just managed to top onto the post. The rebound fell to Balde who blazed wide of goal the first time.

19′ BENZEMA USUALLY SCORES THOSE! A fantastic cross from the left wing by Mendy and Benzema leaped high with a header past the flat-footed Ter Stegen but the net did not bulge with the effort a yard wide.

33′ GOAL! Real Madrid 0-1 Barcelona (Gavi): Lewandowski plays in Gavi in the left-hand side of the area and he coolly slotted the ball past Courtois. It started with Busquets stopping Madrid from playing the ball out of defense, then passes from Dembele to Pedri and Lewandowski before the 18-year-old scored.

45′ GOAL! Real Madrid 0-2 Barcelona (Lewandowski): Roles reversed as this time Gavi lays the ball on a plate for Lewandowski to tap into the net. De Jong plays the ball on the stretch to Gavi who takes his time before setting up the Pole who makes no mistake.

51′ GREAT BALL FROM BALDE TO DEMBELE! He raced down the left flank and then played a beautiful ball between the center-backs to Dembele in the right-hand side of the area but Courtois saved well with his legs.

69′ GOAL! Real Madrid 0-3 Barcelona (Pedri): Just so easy! Barcelona wins the ball in the midfield and then Lewandowski plays it wide to Gavi who finds Pedri at the back post to tap home.

90+3′ GOAL! Real Madrid 1-3 Barcelona (Benzema): Benzema scores at the second attempt. His first strike from Ceballos’ cutback was saved by Ter Stegen’s leg, but he shot home the rebound. 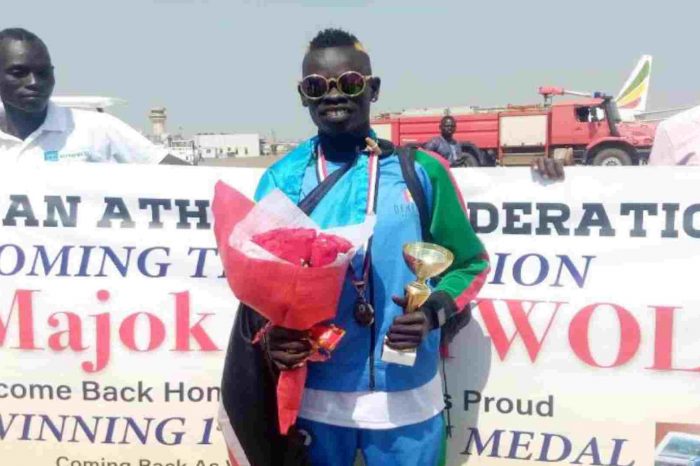 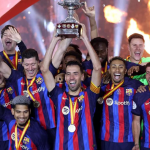