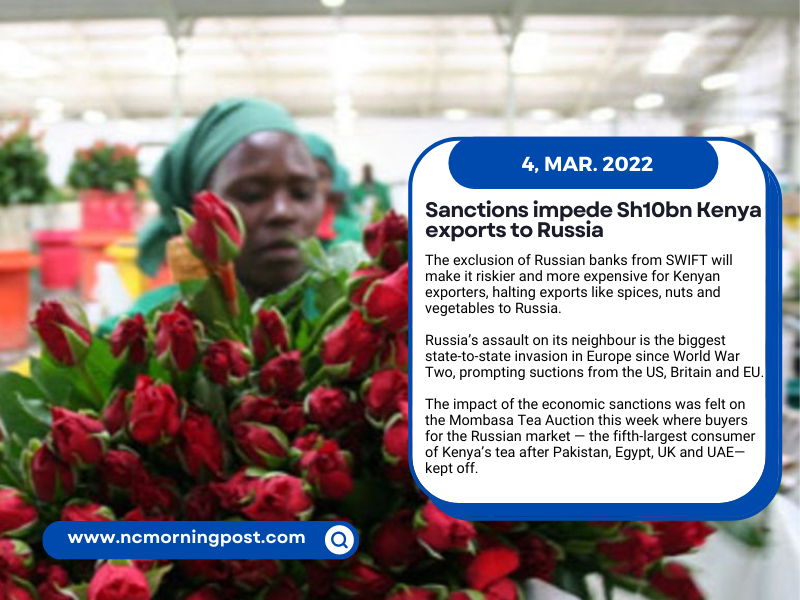 Kenya’s tea, flowers, coffee, and fruit shipments to Russia have been halted as a result of Western sanctions put on Moscow after its invasion of Ukraine, causing local smallholder farmers to suffer.

The export restriction, expected to cost roughly Sh10 billion per year, began when major container and shipping lines briefly halted cargo shipments to and from Russia in reaction to the sanctions.

Excluding Russian banks from SWIFT and its central bank from foreign operations has made it more difficult for the country to pay for imports and receive cash for exports.

The removal of Russian banks from SWIFT would make it more risky and costly for Kenyan exporters, perhaps suspending supplies of spices, nuts, and vegetables to Russia.

Russia’s attack on its neighbor is Europe’s worst state-to-state invasion since World War II, sparking condemnation from the United States, the United Kingdom, and the European Union.

The effect of the economic sanctions was evident this week at the Mombasa Tea Auction, when purchasers for the Russian market — the fifth-largest consumer of Kenyan tea after Pakistan, Egypt, the United Kingdom, and the United Arab Emirates — stayed away.

The international community’s united retribution against Russia for its heinous military aggression against Ukraine has taken a toll on commerce between Nairobi and Moscow, which surpassed Sh45 billion in 2020, and is biased in favor of the world’s biggest country by area.

Russia is often seen as a potential growth market for Kenya’s sluggishly increasing exports. Kenya’s coffee enters the nation through re-exports from other countries, but tea is the major export.

According to industry statistics, Russia purchased 29.61 million kilos of tea worth Sh6.25 billion last year, up from 25.14 million kilos worth Sh5.02 billion in 2020.

According to the East African Tea Trade Association, which oversees the Mombasa auction, the Danish shipping giant Maersk and the French shipping company CMA CGM have written alerts to Kenya’s exporters alerting them of the stoppage of shipments to and from Russia through water or land.

“Even if you are fortunate enough to get tea to Russia since we don’t know if tea is a food or a beverage, how would you be paid when there are sanctions in place that prevent them from remitting money from that country?” On the phone, EATTA managing director Edward Mudibo said.

According to the Kenya Flower Council, which represents large-scale flower enterprises, connecting Nairobi and Moscow has grown difficult since most exporters depend on Amsterdam in the Netherlands to reach Russia.

“The majority of our (cut flower) goods was traveling via Amsterdam and trucked from there all the way to Russia, and the way the EU has taken a stance, no one is going to take a risk moving into Russia because they have to isolate Russia from all fronts,” KFC CEO Clement Tulezi said by phone.

“They have restricted Russian investment and foreign exchange.” We are unlikely to conduct business with Russia in the foreseeable future unless issue is resolved once and for all, since our company is ruled by the dollar as the dominant currency, followed by the euro.”

Without SWIFT, Russian banks may utilize less efficient and secure payment methods such as phones, messaging apps, or email.

“We don’t have many direct exports to Russia, but the majority of our coffee ends up in other nations.” We’ll need time to work on those figures since they’ve already been impacted,” said Enosh Akuma, director of the Coffee Directorate.

Moscow’s inability to deal in dollars will limit its capacity to conduct business with nations such as Kenya.

Maersk, Denmark’s second-largest carrier after MSC, said separately that it would temporarily cease all container shipments to and from Russia.

CMA CGM, France’s third-largest container line, subsequently said on Tuesday that it has canceled all reservations to and from Russia until further notice, citing safety concerns.

Similar choices have already been made by Singapore-based Ocean Network Express and Germany’s Hapag Lloyd, essentially shutting Russia off from the world’s biggest container shipping firms, compounding the freight issues ahead. 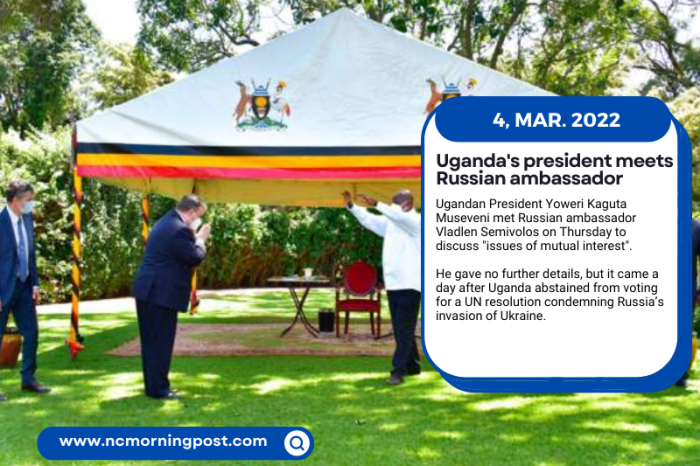 The President of Uganda meets with the Russian Ambassador. 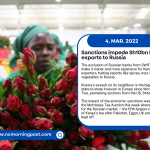