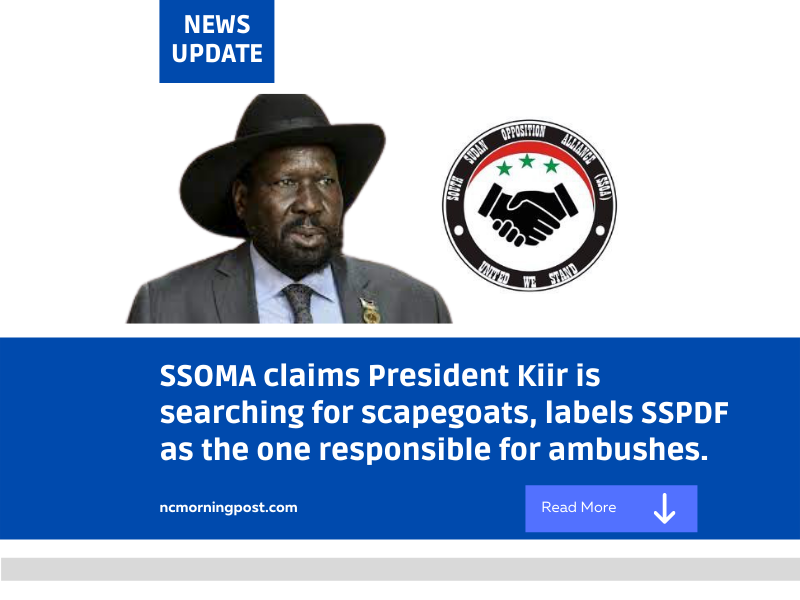 In a press release issued yesterday, the South Sudan Opposition Movements Alliance (SSOMA) accused President Salva Kiir of playing a blame game by blaming the alliance for ambushes along the Juba-Nimule road and instead of blaming the SSPDF.

President Kiir has accused SSOMA, particularly the National Salvation Front (NAS), of planning roadside ambushes twice in the past two weeks, and other senior government and security officials have also mentioned the allegations against NAS.

“The South Sudan Opposition Movements Alliance (SSOMA) observes with worry President Kiir’s announcement that he has ‘paused’ the Juba regime’s participation in the Rome Peace Initiative under the mediation of the Community of Sant’Egidio,” the SSOMA statement stated. “Kiir’s speech was made on 30 August at the inaugural session of the Revitalized- Transitional National Legislative Assembly (RTNLA) (RTNLA). President Kiir went on to reiterate his falsehoods of blaming SSOMA and particularly the National Salvation Front (NAS) for being responsible for instability along the Juba-Nimule highway.”

SSOMA criticized President Kiir’s remarks as reckless and irresponsible declarations of guilt and a weak effort at shifting blame and accountability.

“SSOMA would like to remind our fellow South Sudanese and the International Community, reiterating our position and strong conviction, that Kiir’s regime and its South Sudan People’s Defense Force and the National Security Service (SSPDF/NSS) are the prime and responsible culprits for insecurity on Juba-Nimule road and in the killings of the two Catholic nuns and the other innocent citizens,” the statement said.

“SSOMA and the people of South Sudan hold President Kiir responsible for instability and the death of innocent civilians not only on the Juba-Nimule road but across the country,” it said.

The opposition group stated it had no presence in the alleged incident site along the Juba-Nimule road.

“The heinous murder happened despite the fact that the Juba-Nimule highway was well secured, since the Juba regime’s elites, including President Kiir and Vice President James Wani Igga, were traveling from Loa to Juba that same day after attending the Loa Parish Centenary celebration. As a result, members of the SSPDF and NSS are responsible for this heinous crime,” SSOMA said.

According to SSOMA, President Kiir’s withdrawal from the Rome talks reflects a lack of political will to establish long-term peace in the country.

“However, SSOMA is not surprised by Kiir’s decision to withdraw his regime’s participation in the Rome Peace Initiative. Kiir’s declaration that his government would ‘pause’ its engagement with SSOMA via the Community of Sant’Egidio demonstrates the regime’s usual lack of political will to end the suffering of the people of South Sudan and bring about permanent peace and prosperity,” it concluded.

“SSOMA reiterates its unwavering commitment to dialogue and peaceful resolution of the situation in the Republic of South Sudan by addressing the root causes of the conflict in South Sudan via genuine negotiations.” 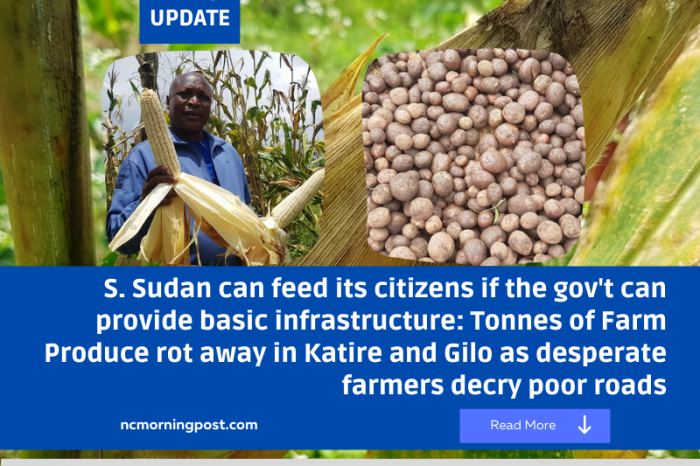 S. Sudan can feed its citizens if the gov't can provide basic infrastructure: Tonnes of Farm Produce rot away in Katire and Gilo as desperate farmers decry poor roads 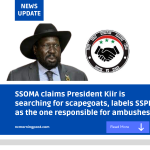