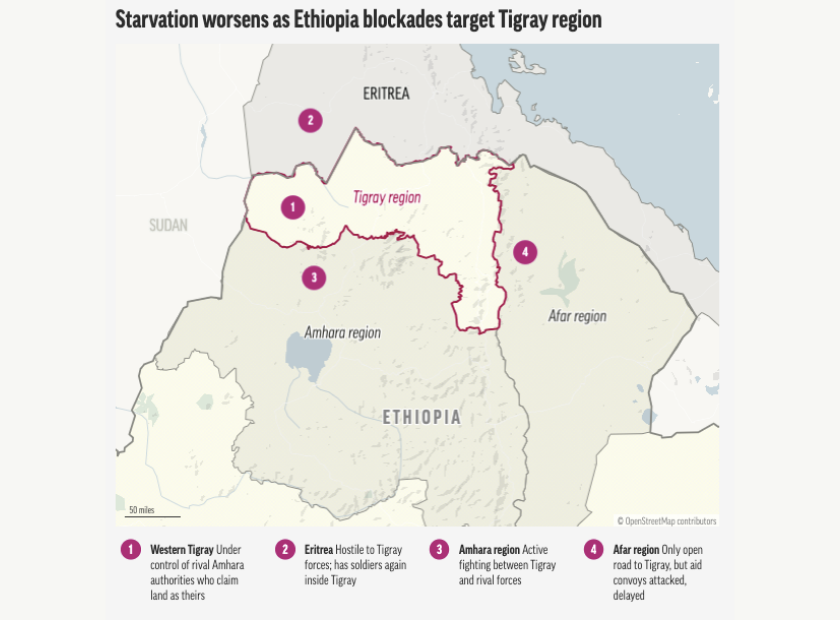 For days, residents in Ethiopia’s Tigray area eat only green leaves. Last week, a woman and her baby weighing just 1.7 pounds died of starvation in a health facility. Residents have starved to death in every one of the more than 20 districts where one humanitarian organization operates.

For months, the UN has warned of famine in this impoverished region of northern Ethiopia, calling it the world’s greatest food crisis in a decade. Internal papers and eyewitness reports now show the first hunger fatalities since Ethiopia’s government implemented what the United Nations calls a “no-famine” policy in June. A “de facto humanitarian aid blockade”

Forced starvation is the most recent chapter of a war that has seen ethnic Tigrayans murdered, gang-raped, and exiled. A new type of mortality has set in months after crops were burnt and neighbourhoods were razed.

In a phone conversation this month, Hayelom Kebede, the former director of Tigray’s renowned Ayder Referral Hospital, remembered warning Ethiopia’s health ministry, “You are murdering people.” “They replied, ‘OK, we’ll send it to the prime minister.’ What can I do? I can’t help but cry.”

He provided pictures with The Associated Press of some of the 50 malnourished youngsters getting “extremely intense treatment,” the first such images to surface from Tigray in months. A tiny kid with astonished eyes looks directly at the camera in one, a feeding tube in his nose, a protective amulet resting in the prominent hollow of his neck.

Medicines are almost depleted, and hospital employees have not been paid since June, according to Hayelom. Conditions for Tigray’s 6 million inhabitants are often worse elsewhere.

The blockade and the ensuing famine represent a new chapter in the 10-month conflict between Tigrayan forces and the Ethiopian government and its supporters. The US has now given an ultimatum: halt the violence and allow assistance to flow freely, or face additional penalties in the coming weeks.

The conflict started as a political squabble between Ethiopia’s prime minister, Nobel Peace Prize winner Abiy Ahmed, and the Tigrayans, who had long controlled the country’s oppressive national government. According to witnesses, Ethiopian troops and those from neighbouring Eritrea have stolen food supplies and damaged health care facilities since November.

Tigray fighters retook the area in June, prompting Ethiopia’s government to announce a truce for humanitarian reasons. Instead, the government has tightened its grip on the area more than ever, afraid that assistance might reach the Tigray troops.

More than 350,000 metric tons of food assistance are stationed in Ethiopia, but only a small portion of it can reach Tigray. The administration is so concerned that humanitarian workers flying to the area on infrequent flights have been issued an odd list of things they cannot bring: dental flosses. Openers for cans. Multivitamins. Medicines, including personal ones.

The list, acquired by the AP, also prohibited the use of hard disks and flash drives to record the situation. Since June, photos and videos from Tigray have vanished from social media, as relief workers and others face intensive searches by authorities and fear being caught with them on their devices. Tigray has reverted to the dark ages, with no telephones, internet, financial services, or assistance.

Ethiopia’s prime minister and other top authorities have disputed that famine exists in Tigray. The government has blamed the difficulties in assistance delivery on Tigrayan forces and insecurity. It has also accused humanitarian organizations of assisting, if not equipping, Tigrayan fighters.

Billene Seyoum, the prime minister’s spokesperson, did not specify when the government will restore essential services to the area. She added in a statement that the administration “has expanded access to assistance routes by reducing the number of checkpoints from seven to two and establishing air bridges for humanitarian flights.” However, medical supplies on the first European Union air bridge trip were removed during the official inspection, and such planes cannot transport significant amounts of food.

A humanitarian worker told the Associated Press that fatalities from hunger are being recorded in “every single” region of the more than 20 in Tigray where one relief organization works, in the most detailed description yet of the blockade’s toll. The gang was out of food and gasoline. For fear of retaliation, the worker, like others, spoke on the condition of anonymity.

According to papers obtained by the AP, the relief organization wrote to a donor in August, “Currently, there are terrible stories coming from every corner.” “If no immediate answer is found, we will lose a large number of people due to hunger.”

Even before the present embargo was established, the same organization wrote to a donor in April, claiming that “reports of malnourishment are rampant,” and that 22 people in one sub-district had died of starvation.

Another worker visited a hamlet in central Tigray in August and reported that the number of people facing hunger was “exponentially increasing” in both rural and urban regions. “People are eating just green leaves for days” in some instances.

According to the employee, she spoke with one mother, who claimed her family had been surviving on borrowed food since June. They had only eaten bread with salt for the previous month. She was concerned that if they did not get food assistance in the following days, they would perish.

“Finally, we stopped asking her because we couldn’t take any more bad news,” the employee wrote. “The (sub-district) administration has also informed us that there are numerous families living in similar conditions.”

According to the Tigray External Affairs Office, at least 150 people died of starvation in August, including in displaced people’s camps. The United Nations’ International Organization for Migration (IOM) “Unfortunately, we are unable to comment on this topic,” stated the agency that supports the camps.

Some toilets in the overcrowded camps are overflowing due to a lack of funds to pay for cleaning, leaving thousands of people susceptible to disease outbreaks, according to a visiting charity worker. People who used to eat three meals a day now only eat one. Residents in camps depend on the generosity of host communities, which often struggle to feed themselves.

“People have been able to get by, but only just,” added the relief worker. “Let’s put it this way: it’s worse than subsistence.”

Food security specialists predicted months ago that 400,000 people in Tigray risk starvation, more than the rest of the world combined. However, because of the blockage, experts are unable to gather the necessary evidence to issue an official proclamation of famine.

Such a statement would be extremely humiliating for Ethiopia, which captured the world’s attention in the 1980s with a famine so terrible, partly caused by war and government negligence, that 1 million people died. Since then, Africa’s second-most populous nation has become a success story, lifting millions out of severe poverty while creating one of the world’s fastest-growing economies.

The conflict is now destroying the economy as well as people’s stomachs. According to the United Nations, malnutrition rates for children under the age of five are close to 30%. According to the World Food Program, and almost 80% for pregnant and nursing women.

Hunger may spread as the conflict progresses. Tigray troops have recently invaded the neighbouring areas of Amhara and Afar, and some people accuse them of retaliatory actions like cutting off supply lines. The Tigrayan troops dispute this, claiming that their goal is to put pressure on Ethiopia’s government to remove the embargo.

The United Nations According to the human rights office, crimes have been perpetrated by both sides, but witness reports suggest that the most prevalent atrocities have been committed against Tigrayan civilians.

There will be minimal assistance. The United Nations According to the UN, at least 100 trucks carrying food and other supplies must arrive in Tigray every day to fulfil the needs of the people. However, as of Sept. 8, fewer than 500 people have arrived at the region’s sole accessible road since July. The United States claims that no medical supplies or gasoline have been sent to Tigray in more than a month, blaming “government harassment” and choices rather than the conflict.

Some assistance vehicles have been assaulted and drivers have been harassed. In August, a United Nations. A team attempting to pick up employees from Tigray was turned around by armed police who “ordered the drivers to go considerably above speed limits while verbally assaulting, harassing, and threatening them,” according to a United Nations report. according to the report

Doctors Without Borders and the Norwegian Refugee Council have had their activities halted after being accused of disseminating “misinformation” about the conflict. Almost two dozen relief workers have been murdered, including those who were delivering food. Some humanitarian workers are compelled to limit their own meals.

According to the United Nations, the demand for food will persist far into next year. says, since the few crops sown during the war are expected to yield just a quarter to half of the normal harvest.

As bleak as they are, tales of hunger fatalities in Tigray only cover regions that can be accessed. According to one Tigrayan humanitarian worker, the majority of people reside or seek refuge in isolated areas such as rocky highlands. Others are in remote regions bordering hostile Eritrea or in western Tigray, which is currently controlled by Amhara authorities who have blocked access to neighbouring Sudan, a possible route for providing assistance.

As food and the means to get it became scarce, the humanitarian worker said, “I am convinced the people dying as a result of this man-made famine are much more than this.” 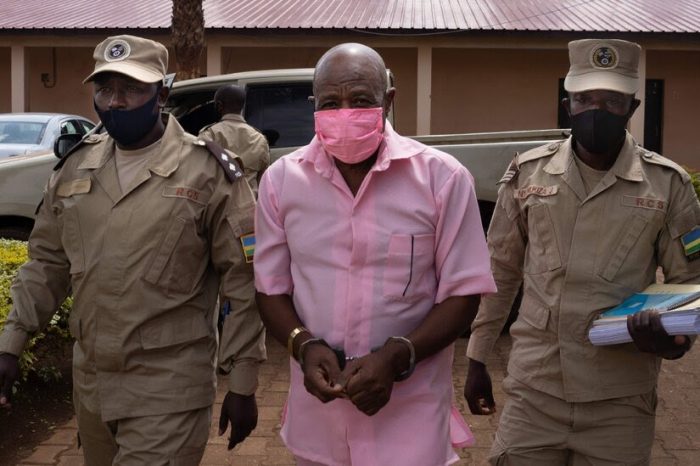 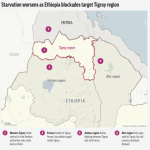