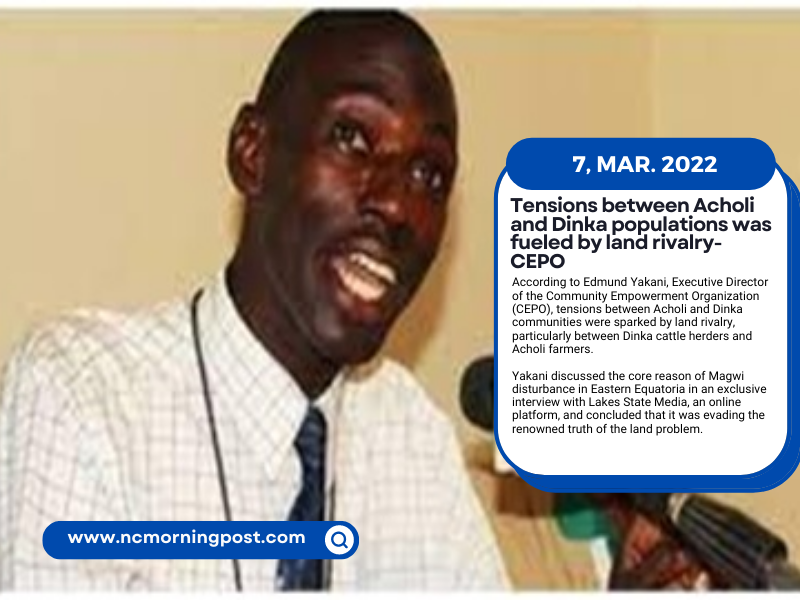 According to Edmund Yakani, Executive Director of the Community Empowerment Organization (CEPO), tensions between Acholi and Dinka communities were sparked by land rivalry, particularly between Dinka cattle herders and Acholi farmers.

Yakani discussed the core reason of Magwi disturbance in Eastern Equatoria in an exclusive interview with Lakes State Media, an online platform, and concluded that it was evading the renowned truth of the land problem.

“I believe that the rivalry for land in Magwi between cattle herders and farmers is at the foundation of all this violence.” This event was sparked by an Agoro assault in the Acholi Community, which resulted in the deaths of two young boys. The second event was a gang of armed youngsters who assaulted and plundered the livestock, killing 20 people and injuring dozens more in the Dinka Community of Jonglei, according to Yakani.

He urged the state government to take the initiative in ensuring the security and safety of inhabitants in Magwi, as well as resolving land disputes between rival groups. In addition, the administration should have a plan for resolving inter-state issues.

“I know Louis LobongLojore visited Magwi soon before the raiders attacked; he was there to ease tensions between cattle herders and farmers.” He established a culture of peaceful coexistence among communities so that they might live in peace. I urged two-state governors, particularly from Jonglei and Eastern Equatoria, to intervene quickly in favor of peaceful settlements and avoid retaliation attacks.”

“I would want the government to devise a plan to resolve inter-state disputes; there is a need to develop a “Community deterrent force” to deal with inter-communal violence.” These troops should get information on the incidence of violence from the Mechanism of Early Warning System.” Yakani came to a conclusion.

However, the Ugandan student union addressed a letter of censure and grief to the families of the Magwi victims, which read:

“We, the Equatoria Students Union in Kampala, Uganda, are deeply outraged, appalled, and agonized by, and strongly condemn, the recent barbaric, brutal, and senseless killing by cattle keepers of host communities in AbaraBoma, IwirePayam, MagwiCounty, which internally displaced more than 10,000 members of the community.”

The Equatoria Students’ Union joins the people of Magwi in expressing our condolences to the victims’ families and friends, as well as our fury at the cow keepers in Magwi’s •abhorrent cruelty. The invasion by these cow keepers, as well as the severity of the assaults, indicate a concerning increase in violence. There is no justification for such savagery and indiscriminate death. Perpetrators must be held accountable. We encourage the state government and non-governmental organizations to display moderation in dealing with the situation, especially in order to avoid harming innocent citizens.

We find it extremely concerning that no immediate action plans have been adopted in response to these crimes against humanity, as this may result in negative community reaction, which may later be misinterpreted as violence when it is actually self-defense. We strongly urge all communities and groups to reject violence.

After decades of insecurity and instability, it should be obvious that violence is not the answer to South Sudan’s problems. 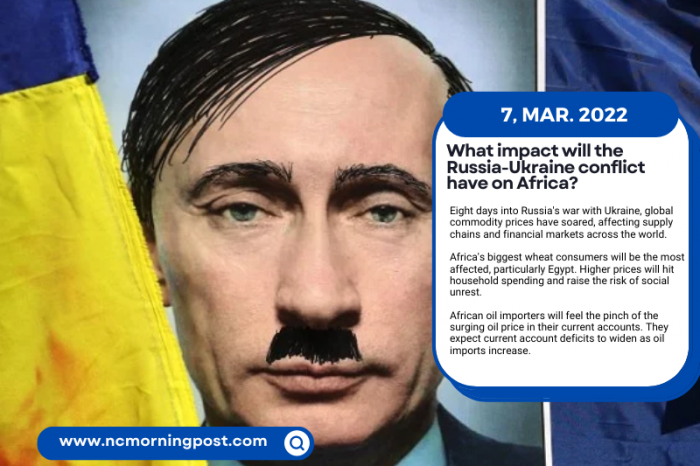 What impact will the Russia-Ukraine conflict have on Africa? 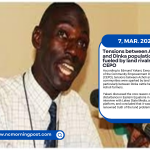