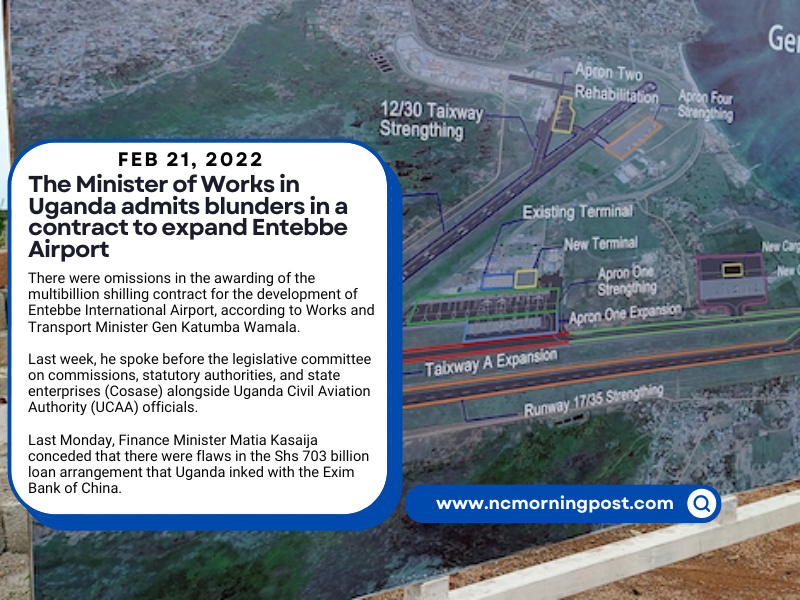 There were omissions in the awarding of the multibillion shilling contract for the development of Entebbe International Airport, according to Works and Transport Minister Gen Katumba Wamala.

Last Monday, Finance Minister Matia Kasaija conceded that there were flaws in the Shs 703 billion loan arrangement that Uganda inked with the Exim Bank of China.

Several inconsistencies have been identified in the $200 million contract awarded to China Communications Construction Company (CCCC) (about Shs 703 billion).

The extension work encompasses a cargo area of 300 by 400 meters, allowing for increased freight production of up to 100,000 metric tons per year. Cosase, led by its chairman, Nakawa West Constituency MP Joel Ssenyonyi, questioned Katumba by explaining why the Chinese business received a certificate of conformity from the Public Procurement and Disposal of Public Assets Authority (PPDA) in 2022 despite signing the contract in 2015.

The PPDA is in charge of regulating and transparently supervising the acquisition and sale of government-owned property and other assets of public interest.

The legislators also requested the minister to explain why, after being granted the contract, the contractor signed a memorandum of understanding (MoU) with the Works ministry to conduct a feasibility study but then went on and completed the job themselves.

Ssenyonyi said that in the MoU before the committee, the contractor negotiated with the Works Ministry and promised to find a donor to pay for the repair of Uganda’s sole international airport, thereby forcing the government into a questionable arrangement.

MPs were astonished by the poor development of the works, according to Ssenyonyi, who added that the business had neglected to create a provision for a gasoline hydrant and a ramp to accommodate Persons with Disabilities (PWDs).

“That is an issue. Due to the flaws in how these folks obtained this contract, you can see how the work is proceeding; it is sluggish, and they did not include something as basic as a ramp for those with disabilities. However, after many years of execution, the same individuals who designed and are conducting this work discovered that, well, there is something we should have had to do with gasoline hydrants that are meant to match international standards.

Now, if you’re skilled enough, you should have seen this from the start. As a result, competency issues arise for a facility as vital as Entebbe International Airport. On camera, the minister admitted that there were omissions “Ssenyonyi said.

The Bukoto Central Constituency MP, Richard Sebamala, a civil engineer by profession, confronted the minister with explaining the high cost of establishing the passenger terminal, cargo center complex, pavement, and drainage, all of which were valued at $15 million.

“The overall cost of the designs was $13 million. What exactly would it take for a design to cost Shs 15 billion? Then there were general payments of $5.1 million.

I’d want to know which general products were bought for with the $5.1 million. I’m a civil engineer, and I know that developing a building for Shs 15 billion is unusual, just as designing a pavement for Shs 9 billion is unusual.

How did they come up with these figures…

We just need to determine whether or not it is good value for money “Sebamala said.

However, Katumba, who was named state minister for Works and Transport in 2016, a year after the ministry signed the MoU with CCCC, and went on to become a full minister in 2019, said that he was unable to provide appropriate answers to all of the concerns. He suggested that people who were present in the office at the start of the project be called by the committee to explain the contract’s flaws.

“Those were omissions, and none of us were even at the office; we’re not even qualified to tell where this financing and arrangement came from. It could be asking too much of me. Good enough, the folks who were there aren’t dead; they’re still alive. You might contact them and inquire as to how we arrived at this conclusion. It’s tough for me to explain what occurred in 2012. I may not be able to provide you with a satisfactory solution. Even if we sat here all day, I would be lying if I claimed to understand how the bilateral came to be “Katumba said.

Previously, Levy Musinguzi, a former assistant business development manager for the Chinese company, informed lawmakers that the airport expansion works did not follow the standard procurement chain of 160 days, as required by the PPDA Act of 2003.

On November 17, 2015, the government, via the Ministry of Finance, Planning, and Economic Development, and the UCCA, struck a deal with China Exim Bank to borrow money at 2% upon disbursement for 20 years, with a seven-year grace period.

The UCAA expansion project was announced in 2015, with phase one of the project beginning on May 10, 2016. The project was intended to be finished by May 2021, but it was delayed until December 2022. 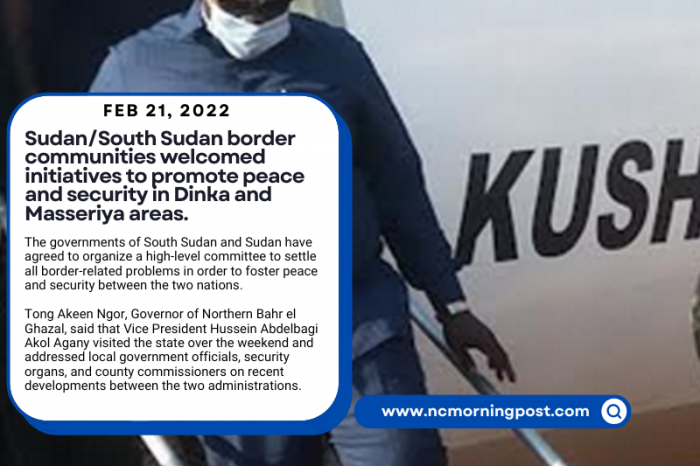 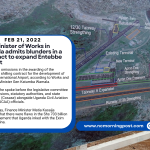