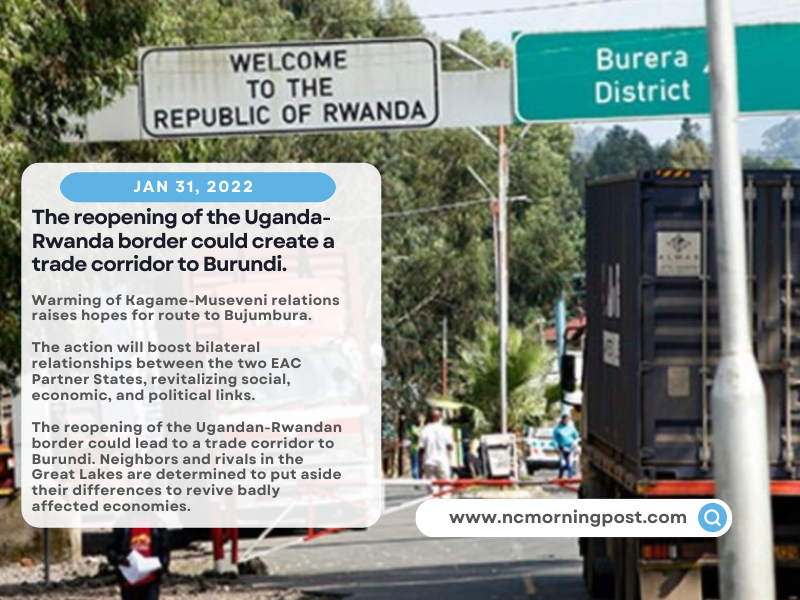 The reopening of the Ugandan-Rwandan border could lead to a trade corridor to Burundi. Neighbors and rivals in the Great Lakes are determined to put aside their differences to revive badly affected economies.

Also, the Rwanda and Uganda have been praised by the EAC Secretariat for their efforts to reopen the Gatuna-Katuna border crossing on January 31, 2022.

In a statement obtained by The Exchange Africa, EAC Secretary General Peter Mathuki praised the decision, calling it a boost to regional integration.

He noted that the action will boost bilateral relationships between the two EAC Partner States, revitalizing social, economic, and political links.

“Reopening this important trade route is in keeping with the EAC Common Market Protocol and will accelerate the Partner States’ economic and social growth by resuming the free movement of products, people, capital, and labor,” Mathuki added.

The Secretary-General also said that restoring the border will benefit regional peace and security.

“The step demonstrates the EAC Heads of State’s genuine commitment and existing goodwill to broaden and deepen collaboration in the bloc, especially as the community grows with the planned inclusion of the Democratic Republic of the Congo,” he added.

According to Mathuki, the community is dedicated to supporting measures that promote East African regional integration.

“The Secretariat is ready to give any technical assistance needed to guarantee the sustainability of the circulation of goods and services across all frontiers,” Mathuki added.

The reopening of the border will stimulate social and economic activity, as well as aid informal cross-border merchants who depend on the two Partner States for supply and market.

It would also expedite the opening of the Gatuna-Katuna One-Stop Border Post and lower the cost of doing business in East Africa. The Secretary-General further said that reopening the border would enhance peace and security in the region.

Bosco said that trade facilitation officers will be placed on the Ugandan side to provide 24-hour service to ensure the smooth movement of goods between Tanzania and Uganda.

“On the Tanzanian side, all agencies provide 24-hour services, while on the Ugandan side, only the immigration agency runs 24 hours at the Mutukula border,” he remarked.

Kalisa noted that East Africans were unable to trade with one another because NTBs placed on EAC-originating items in which nations enjoy a competitive advantage.

He urged the EAC Partner States to eliminate tariffs and non-tariff barriers (NTBs) on rice and maize.

According to Joseph Cosmas of the Tanzania Chambers of Commerce, Industries, and Agriculture (TCCIA), the planting and harvesting seasons in Uganda and Tanzania vary, and the embargo harmed maize imports.

“Tanzania’s import prohibition on maize from Uganda is harming the competitiveness and expansion of intra-EAC commerce since trucks ship items to Uganda and return empty, rather than carrying harvested maize back to Tanzania during the deficit season.”

According to Moses Kadera, Chair of Tanzania Freight Forwarders Association (TAFFA), Uganda raised the excise rate on rice from 6% to 13%, making Uganda-Tanzania commerce at Mutukula unpredictable and paralyzing.

They talked at Mutukula OSBP at an EABC-TMEA public-private interaction attended by around 50 delegates from the Ministry of Foreign Affairs and trade facilitation agencies.

Importers, exporters, transporters, women cross-border merchants, and the Eastern African Sub-Regional Support Initiative for the Advancement of Women were among the others (EASSI).

Several proposals were made at the EABC-TMEA public-private interaction at Mutukula OSBP, including the establishment of a trade information desk for women small-scale merchants. They also requested financial assistance for cross-border companies’ recovery in the aftermath of Covid-19, as well as customs sensitization efforts, among other things. 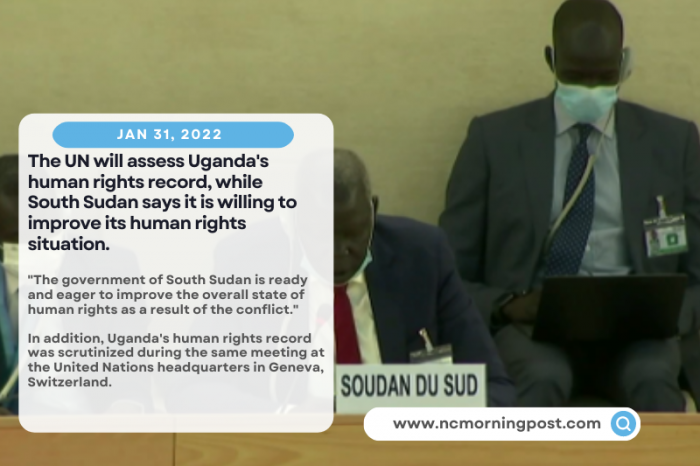 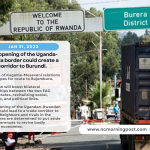