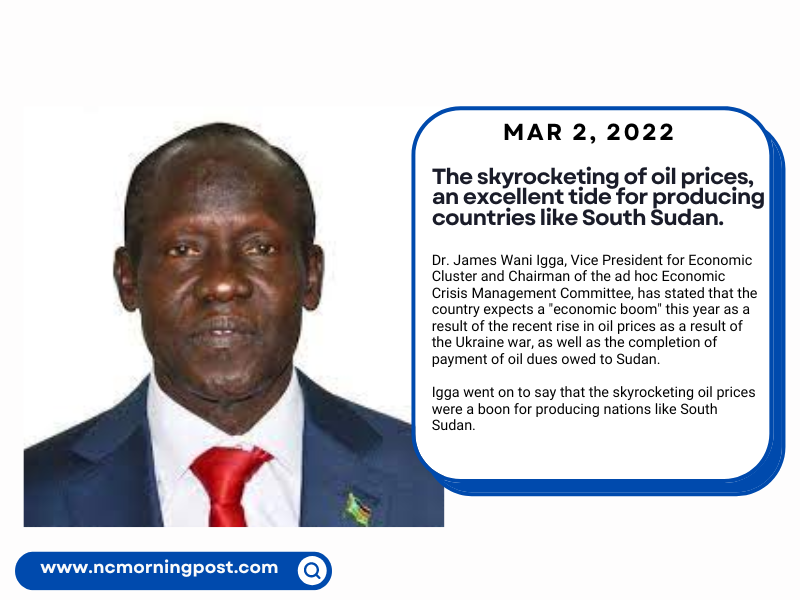 Dr. James Wani Igga, Vice President for Economic Cluster and Chairman of the ad hoc Economic Crisis Management Committee, has stated that the country expects a “economic boom” this year as a result of the recent rise in oil prices as a result of the Ukraine war, as well as the completion of payment of oil dues owed to Sudan.

Dr. Igga made the comment yesterday at the start of a two-day workshop aimed at improving the government’s policies in order to stimulate rapid economic development in the nation.

He added that Juba has finished payment of a three-billion-dollar Transitional Financial Arrangement (TFA) to Khartoum under the provisions of a Corporation Agreement agreed by both countries in 2012.

“The good news from the oil fields is that we have, alas, finalized payment of over US dollars three billion TFA by the end of last January 2022, and now we shall be receiving nearly USD 12 million monthly from the Khartoum Government being the cost of crude oil diverted by Sudan for running their generators in Jeili and Kosti, and that the relief for the USD three billion reinforced with the aforementioned monthly payment will by far boost the economy,” he said.

Igga went on to say that the skyrocketing oil prices were a boon for producing nations like South Sudan.

“We are grieved by the conflict in Ukraine, which might have been prevented if diplomacy had been exhausted; nonetheless, the skyrocketing of oil prices is good news for oil-producing nations.” “By all accounts, what South Sudan has left is competent supervision and administration,” he continued.

The nation is presently producing roughly 170,000 barrels per day, which is over 20,000 barrels fewer than it was earlier in the year.

South Sudan is also a member of the OPEC coalition, which is currently in the midst of a 7.6 million barrels per day production cut agreement and had committed to cut output to 100,000 barrels for May, June, and July, while for August and beyond, it agreed to produce 106,000 barrels from its reference level of 130,000 barrels.

Awow Daniel Chuang, Undersecretary of the Ministry of Petroleum, previously stated that relations between South Sudan and Sudan had improved and that the government hoped to complete payments to Sudan under the transitional financial arrangement (TFA) by 2021, after which it would be able to renegotiate better terms.

South Sudan depends on Sudan to transport crude oil to the Red Sea through a pipeline that runs via Khartoum.

South Sudan pays four fees for each barrel of oil produced. A transportation charge, a processing fee, a transit fee, and the TFA, which is a non-commercial tariff.

The first three are commercial costs that have a significant influence on the economy and the oil sector, especially the political TFA charge, which is USD15 per barrel. While the three commercial fees add up to between USD nine and USD eleven.

Dar Petroleum Operating Company operates Blocks 3 and 7 in the Great Upper Nile, and they produce roughly 130,000 bpd, which sometimes reduces owing to logistical and other issues. 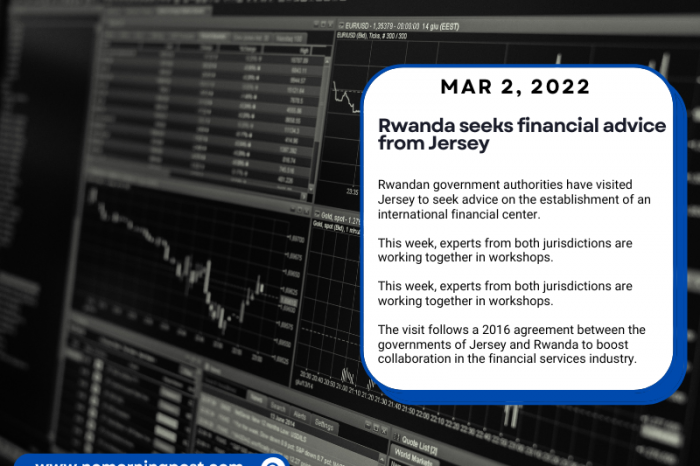 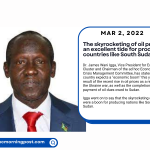