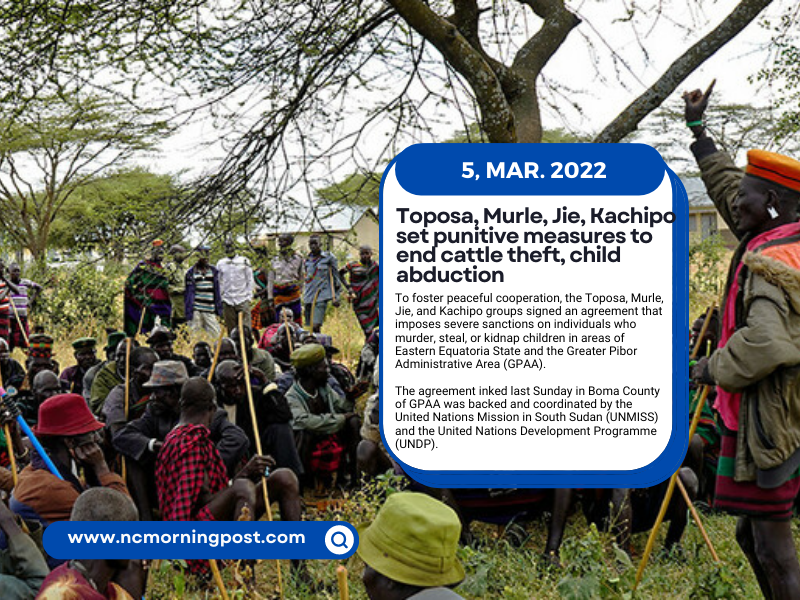 To foster peaceful cooperation, the Toposa, Murle, Jie, and Kachipo groups signed an agreement that imposes severe sanctions on individuals who murder, steal, or kidnap children in areas of Eastern Equatoria State and the Greater Pibor Administrative Area (GPAA).

The agreement inked last Sunday in Boma County of GPAA was backed and coordinated by the United Nations Mission in South Sudan (UNMISS) and the United Nations Development Programme (UNDP). It intended to create a platform to promote peace and harmony among the people.

According to Aliandro Lotok Alfred, press secretary in the office of Eastern Equatoria State Governor Louis Lobong Lojore, the villages condemned all kinds of violence and pledged to maintain peace.

“The Toposa, Murle, Jie, and Kachipo communities assembled in Boma and discussed how they may find a solution to some of the conflicts that they had in that region,” he added. “Remember that it is the dry season in Kapoeta, and the cattle keepers from Kapoeta have gone to a site called Mewun in the Kachipo region of the Greater Pibor Administrative Area, and that migration has produced tensions between the Toposa and the three groups that occupy Boma.”

Lotok said that the groups convened and deliberated for four days before signing resolutions to control their interactions.

“Four, if a man abducts a kid, he must return the child with 15 herds of cattle or be imprisoned, and the person who purchased the child must pay 40 cows. A guy who rapes a woman must pay 10 cows and two cows as a fine, and the amusing part is that if you are dating a girl and she denies you, but you then decide to abduct her and rape her by force, you must pay three cows “He continued.

The governor’s press secretary also said that the villages have requested that the government build a route connecting Narus and Boma to facilitate mobility.

He urged the four communities to live in harmony.

“We must live in peace, embrace peace, and coexist peacefully with one another.” This is what we need as human beings; without peace, we would not be able to accomplish or achieve anything,” he concluded.

The authorities asked neighboring towns to abide by the conditions of the agreement so that true peace could rule in their particular territories.

Relations between the villages have been strained since January, when they accused each other of cow theft, kid abduction, and agricultural devastation by cattle rustlers. 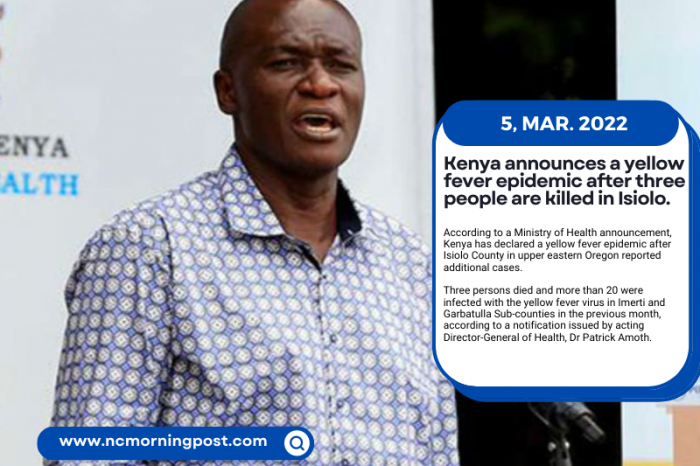 Kenya announces a yellow fever epidemic after three people are killed in Isiolo. 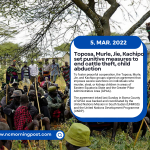