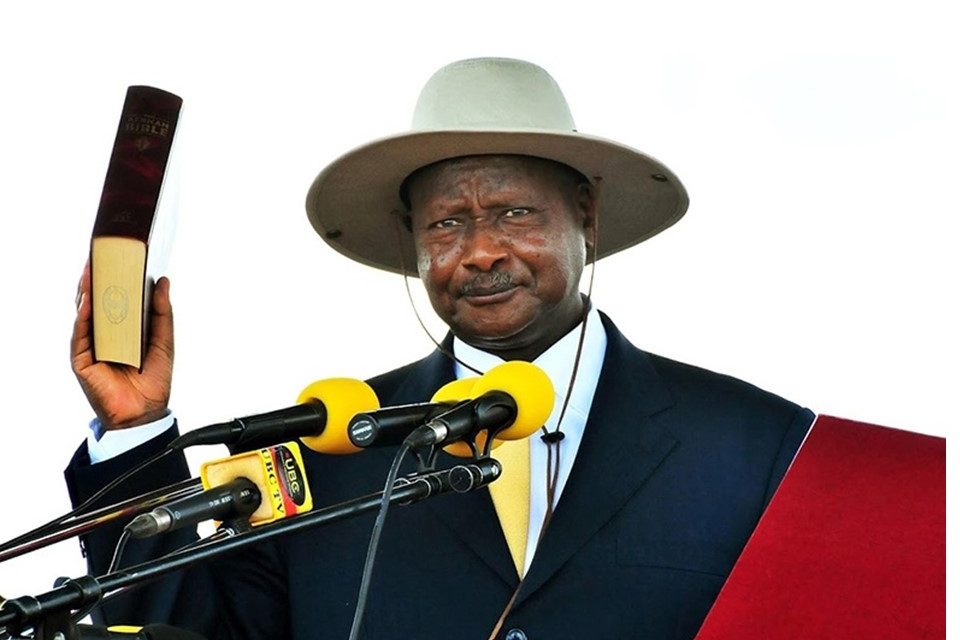 With the completion of the swearing-in ceremony on May 12, 2021, Yoweri Museveni, aged 76, has begun his sixth consecutive term in the presidential office of Uganda. Ironically, it was Museveni who was critical of the African rulers that were corrupt and had ‘overstayed’. However, he already is in the company of African rulers of the past decade, such as Muammar Gaddafi (Libya), Robert Mugabe (Zimbabwe), Omar al-Bashir (Sudan), and Idriss Déby (Chad) who governed their respective states with an iron hand.

As a shrewd ruler, Museveni manipulated political institutions to ensure his survival. Through constitutional amendments, the term limit, as well as the age limit of 75 to hold Presidential office, was removed in 2005 and in 2017, respectively. When Uganda conducted its elections in January 2021, Museveni’s National Resistance Movement Party (NRM) was declared elected by 58.64 percent of votes cast on January 14, 2021. However, the voter turnout was low because just 10 million voters out of 18 million eligible voters chose to cast their votes.

Museveni’s rival, namely Robert Kyagulanyi, better known as Bobi Wine, of the National Unity Platform Party (NUP), had challenged the outcome of the allegedly fraudulent elections. As a musician and a star icon representing the younger generation, Wine aspired to challenge Museveni’s omnipotent position by defeating him.

Even if two-thirds of the population of Uganda is under 30 years of age, he failed to bring about a generational shift in spite of his charisma. However, before the poll, the Museveni regime had deployed state security personnel to crackdown on civil society activists and opponents of the regime leading to 45 people being killed in November 2020; rallies were organized in spite of COVID-19; human rights and civil liberties were suppressed, and the internet was shut down. Even Bob Wine was dragged out of his car and placed under house arrest. He was accused of inspiring riots and of being an agent of foreign schemes.

The outcome of the elections failed to send out a positive message to the outside world. Tibor Nagy, the US diplomat in Africa, viewed Museveni’s election as fundamentally flawed. Since 1986, Uganda has been amongst the leading beneficiaries of US aid in Africa and the US Department of State is considering a series of actions against the Museveni regime. Similarly, the EU countries have expressed grave concern over the regime’s treatment of political actors and civil society.

Despite this criticism, as soon as Museveni re-assumed office, he insisted that issues related to the insecurity of Libya, several countries in West and Central Africa as well as Somalia and Mozambique needed to be addressed. He was critical of the arrogant and irresponsible actions of the West, whom he dubbed as ‘aggressors’, and highlighted how surrounding states suffer due to such acts of aggression.

Museveni’s re-election inevitably will have regional and global implications. Uganda’s geographic location and controversial past only justify these conjectures.

Uganda is a strategically located landlocked state that borders South Sudan, Kenya, Rwanda, Tanzania, and the Congo. Amongst its neighbours, Tanzania and Kenya offer access to the Western Indian Ocean Region (WIOR) while the other three states are resource rich.

Moreover, the Ugandan territorial space can be used as a natural base for regional as well as international trade and transactions. Unfortunately, since Uganda’s independence in 1962 till 1986, Uganda had a dismal history of governance. Its first head of state, namely Milton Obote, was overthrown in a military coup led by General Idi Amin in 1971. Further, millions of human lives were lost under Amin’s genocidal regime (1971-79).

Obote once again became President from 1980-85. As a part of the National Salvation Front (NSF), Museveni initially joined hands with Obote to oust Amin in the 1970s. Later, along with former Ugandan President Yusuf Lule  (April to June 1979), he was leading the National Resistance Movement (NRM), especially its armed wing, to oust Obote and his short-term successors. Eventually, through armed struggle, he captured power in 1986 and Uganda became a functioning democracy only after 1996

The Museveni regime attracted the attention of Western countries because it was getting associated with capitalist reforms, sustained economic growth, free press, infrastructure development, and political stability. Museveni’s performance appeared impressive compared to his predecessors. In a referendum held in 2005, Uganda became a multi-party democracy. Although Museveni had apprehensions that a multi-party system could fuel tribalism, he opted to accept the verdict of the people. Irrespective of these achievements, Museveni failed to counter the Lord’s Resistance Army (LRA), an organization once designated as a terrorist outfit by the US, led by Joseph Kony in northern Uganda.

Museveni also could not hide his pyromaniac tendencies while handling Ugandan policy with immediate neighbours. He sided with the Rwandan Patriotic Front (RPF) in the 1990s that fought to deliver justice to the Tutsis, who were victims of genocidal attack in Rwanda. Ugandan soil provided the base for the RPF and Tutsi exiles as well. He supported the Congolese revolutionary, Laurent Kabila, who successfully ousted the Mobutu Sése Séko regime in Zaire (The Congo) in 1997. He also extended support to the people of Southern Sudan in their struggle against the Islamic fundamentalist regime of al-Bashir.

Furthermore, Uganda has been providing troops to the African Union’s peacekeeping mission (AMISON) that is fighting the terrorist activities of Al-Shabab in Somalia, an outfit linked to Al-Qaeda. It was this anti-terrorist thrust of Museveni’s policy in the region that allowed him to forge closer bonds with the US, which provides more than US $970 million annually to Uganda as aid in spheres such as health, military, education, and agriculture.

Thanks to the US aid in anti-retroviral treatment, Uganda was able to treat almost one million HIV patients. Besides, 10,000 Ugandan security guards have served in the American bases in Iraq and Afghanistan.

Uganda’s geographic location also offered opportunities to it to play a go-between role between the Western companies and its neighboring states. In fact, the Ugandan government has openly provided arms as well as troops to the Sudanese People’s Liberation Army (SPLA) since the start of the conflict between South Sudan and Sudan in 2013. As a transit country, Uganda signed a military cooperation agreement with South Sudan in 2014. It also began to welcome refugees from South Sudan.

What is more, as a transit state, Uganda procured at least three M24 U attack helicopters exported from Ukraine in disassembled form in July 2015 and reassembled them to be sent to South Sudan. South Sudan also acquired small arms and ammunition from Bulgaria, Slovak Republic, and Romania via Uganda. The most noteworthy feature of the arms market in East and Central Africa has been networks of jointly-owned Ugandan and US companies controlled by British, Israeli, US, and Ugandan nationals. In the process of operating vi aland as well as air logistics, these networks have procured military jets from the US and aircrafts made in Australia which, in turn, were delivered for the service of SPLA in the conflict during 2015 and 2016.

The entry of China and India

Apart from the US and Western powers, Uganda also has to negotiate with the growing presence of China and India in Africa. China has been projecting its power aggressively in Africa in general, and Uganda in particular. China has approved a massive loan of US $580 million, mostly through the Export-Import Bank (EXIM), to finance projects like the expressway from Kampala to the international airport as well as hydropower dams.

Ugandan authorities have launched a number of projects in anticipation of the oil revenue that Uganda will earn after oil is extracted by 2022. China is also keen on pushing its Belt and Road Initiative (BRI) in Uganda. Out of its US $10 billion debt, Uganda owes one-third of it to China. In spite of the claims that China’s aid is without strings attached, Matia Kasaijia, the Ugandan Finance Minister, was keen on protecting Ugandan assets and preventing Uganda from falling into China’s debt trap.

In 2018, in his confidential letter to Museveni, which was leaked, he had mentioned money as a collateral in escrow accounts of China, alleged failure of the Chinese-run projects in hiring Ugandan nationals and obtaining locally sourced materials such as cement.

In contrast to China, there was a sizable and enterprising Indian diaspora in Uganda before General Amin threw Indians out of Uganda in the 1970s. Even at this stage, Uganda has 30,000 Indians. Currently, India has extended two lines of credit worth US $200 million to help Uganda in the spheres of energy, food processing, agriculture, and dairy. It has sent vehicles that could be deployed for civilian and defence-related purposes to Uganda.

The personnel from Ugandan People’s Defence Force (UDPD) are being trained in India’s defence-related institutions. With Prime Minister Modi’s visit to Uganda in 2018, Indo-Ugandan cooperation in capacity building and development cooperation has gotten a further boost. India has built the Mahatma Gandhi Convention/heritage Centre at Jinja, where the Mahatma’s ashes were immersed in the Nile. Gandhi continues to be a bond between India and Africa.

Museveni has begun his sixth term amidst growing opposition from within, sharp criticism of the US and EU, along with possible punitive measures against his regime from the former.

However, considering his stature as a long-serving leader who gave political stability to Uganda, Museveni will eventually matter in the Western calculations as an important leader in Eastern and Central Africa. Currently, the circumstances with which he is saddled will test his staying power while handling domestic opposition as well as major external powers. 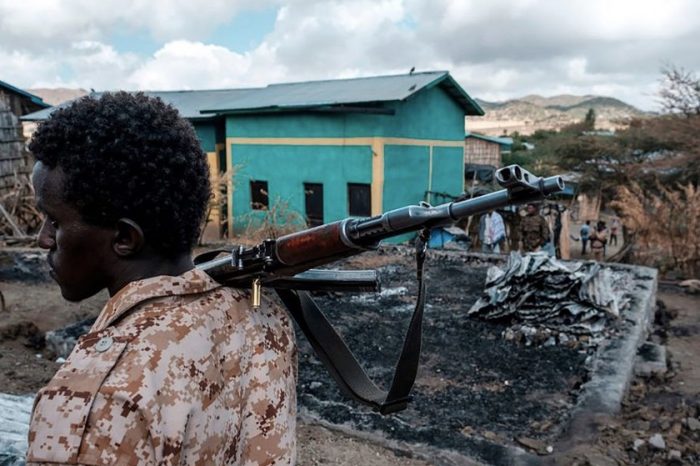 US imposes sanctions on Ethiopia over Tigray crisis 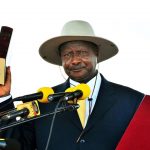