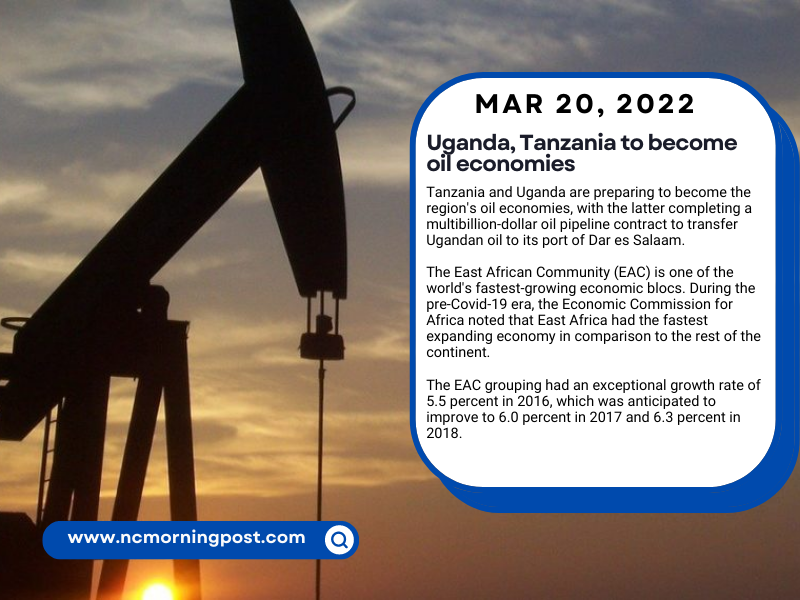 Tanzania and Uganda are preparing to become the region’s oil economies, with the latter completing a multibillion-dollar oil pipeline contract to transfer Ugandan oil to its port of Dar es Salaam.

The East African Community (EAC) is one of the world’s fastest-growing economic blocs. During the pre-Covid-19 era, the Economic Commission for Africa noted that East Africa had the fastest expanding economy in comparison to the rest of the continent.

In actuality, the World Bank’s Global Economic Prospects Report at the time predicted that Tanzania will expand by 7.1 percent in 2017, Kenya and Rwanda by 6%, Uganda by 5.6 percent, and Burundi by 2.5 percent. Everything changed when the worldwide epidemic hit.

For example, in Tanzania, which was leading the bloc in economic development with a predicted 7.1 percent rise, projections done in December 2020 showed the country’s Gross Domestic Product growing by just 2.1 percent in 2020.

The nation was able to buffer its economy from further declines thanks to effective government fiscal and monetary measures, and the Tanzanian economy demonstrated outstanding resilience with 4.1 percent GDP growth in 2021.

To sustain and increase this yearly percentage rate, the government must diversify its income sources locally, regionally, and internationally. Tanzania has shown its competence in this area. In its most recent economic venture, the government has embraced an oil-based future by cooperating with oil-rich Uganda on a massive oil pipeline project.

Uganda is thought to have 0.2 percent of the world’s total oil reserves. The nation ranks 31st in the globe with an astounding 2.5 billion barrels of proven oil reserves. The country’s oil reserves are really more than 200 times its yearly consumption, providing it with enormous export power.

With prospecting begun on the banks of Lake Albert in Uganda’s Hoima District, the first of a possible 1.4 billion barrels of oil is expected to be pumped out by 2025.

The country’s and region’s investment flows are mostly ascribed to capital investment in the oil, gas, and industrial sectors. Let us concentrate on oil investments. Tanzania, as previously stated, has collaborated with its landlocked neighbor Uganda on the building and operation of the East African Crude Oil Pipeline Project (EACOP).

The EACOP is a 1,443-kilometer pipeline that cost 3.5 billion USD to build. These money were immediately pumped into the economies of Uganda and Tanzania, thereby raising FDI by more than 60% during the building phase alone.

The generous project is being built and operated through a joint venture between several stakeholders, including the government of Uganda through the Uganda National Oil Company (UNOC), the government of Tanzania through the Tanzanian Petroleum Development Corporation (TPDC), Totalenergies of France, and CNOOC of China.

The East African Crude Oil Pipeline is projected to increase the region’s oil potential. It will successfully entice investors and corporations to investigate the region’s oil possibilities. Furthermore, when new infrastructure projects begin in accordance with the pipeline, they will significantly contribute to the improvement of the central corridor between Uganda and Tanzania.

Another clear and immediate advantage of the pipeline is the development of short-term (2-3 year) jobs for highly qualified and semi-skilled professionals, as well as casual laborers. Similarly, the initiative will provide new economic possibilities and encourage the creation of local content.

Then there’s the creation and maintenance of pipeline infrastructure, which will help both nations create technical capability. In this approach, local content involvement will be increased, as will knowledge transfer, allowing interested enterprises to grow and prepare for future significant projects.

There will be service roads all along the pipeline that will need to be updated to provide access for pipeline maintenance. As a result, the roadways will boost the mobility of products and people, helping to improve local economies wherever the pipeline passes.

There’s an African proverb that says something like this: “It is the tree that bears fruit that gets hailed at.” The phrase is a simple rebuke to critics; the stones represent the critiques, and the tree represents the victim; the fruits represent the ‘goods’ for which the critics are targeting the victim.

Critics say that investing in an oil economy may not be helpful to the area in the instance of Uganda and Tanzania. Why? There are various alleged reasons for this, including the fact that the world as a whole is transitioning to a green economy.

For example, in a BBC report published earlier this month headlined ‘Why Uganda is investing in oil despite efforts to become green,’ it is suggested that:

“After the FID was signed this month, a group of more than 50 non-governmental organizations from Uganda and the neighboring Democratic Republic of the Congo issued a statement saying the investment would have been better directed to cleaner and greener industries rather than worsening the global climate change impact.”

According to the report, there is a “… worry that the massive infrastructure development built just for the oil sector – such as an airport with a 3.5km runway – might wind up as white elephants if the oil export does not pan out.”

“If the energy shift [away from oil] takes hold, there is a danger of stranded assets; where part of the investment you make in oil production infrastructure does not deliver a satisfactory return to the economy,” says Paul Bagabo, the Natural Resource Governance Institute’s Uganda country lead.

The report, however, balances the criticism by citing Uganda National Oil Company Chief Executive Proscovia Nabbanja, who claims that the project is feasible and that “for dollar we spend, we return ten.”

The CEO also believes that “discussion from richer nations about transitioning away from oil is unjust to countries like Uganda, which should be allowed to profit from its resources.”

It remains to be seen how it all plays out, if production will begin in three years and whether the returns will be as profitable as projected, and whether the worldwide shift to green economies and clean energy will have an impact on the East African Crude Oil Pipeline Project’s promised advantages (EACOP). 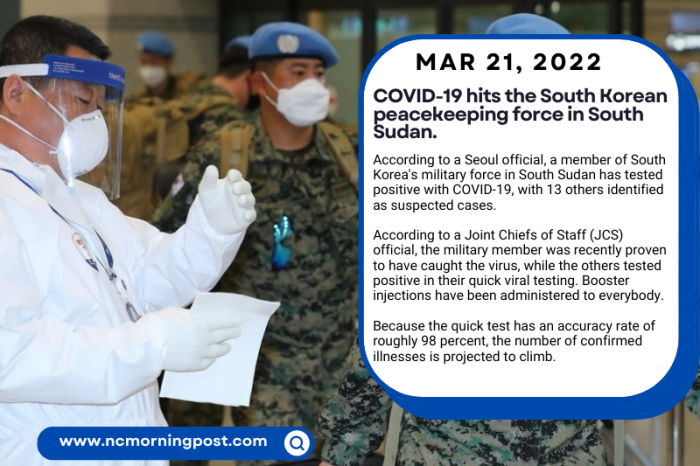 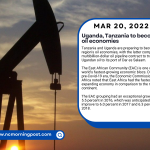