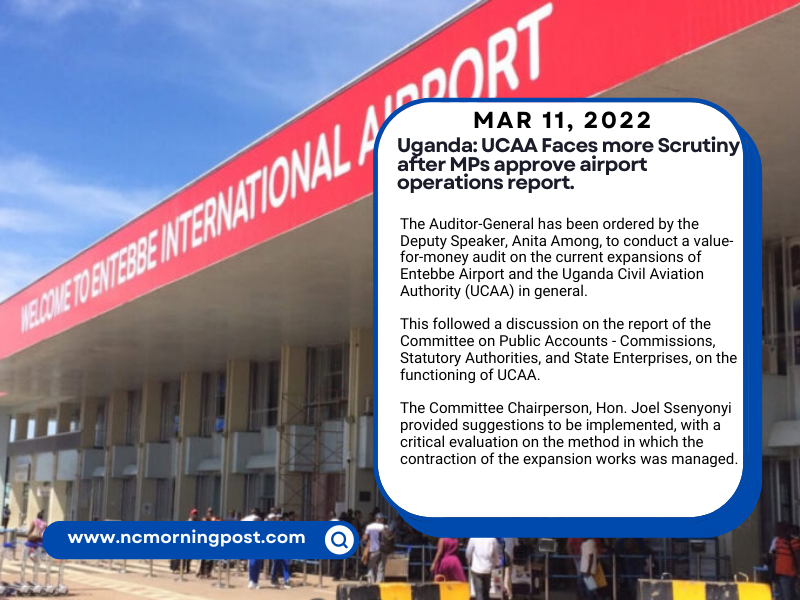 The Auditor-General has been ordered by the Deputy Speaker, Anita Among, to conduct a value-for-money audit on the current expansions of Entebbe Airport and the Uganda Civil Aviation Authority (UCAA) in general.

This followed a discussion on the report of the Committee on Public Accounts – Commissions, Statutory Authorities, and State Enterprises, on the functioning of UCAA.

The Committee Chairperson, Hon. Joel Ssenyonyi provided suggestions to be implemented, with a critical evaluation on the method in which the contraction of the expansion works was managed.

Ssenyonyi questioned the procedure leading to the award of the offer, stating it was uncompetitive and breached the contract laws of Uganda.

“The committee observed that…the MoU signed between the Ministry of Works and Transport and CCCC established a contract, identified a bidder, spelled out the type of contract as design and build on the project and determined the source of funding; the MoU did not create room for competitive bidding in the project,” he said.

The committee also took issue with sections in the deal, some of which they believed violated the sovereignty of Uganda.

One of the controversial parts is clause 3, which the committee observed that it imposes “Chinese legal jurisdiction on the loan recovery system and arbitration”.
The Attorney General, Hon Kiryowa Kiwanuka, however, said there is no need to have anxieties as Uganda does not plan to violate the contract, which circumstance would trigger the impugned articles against Uganda.

“We have not been and are not in violation of a contract; we execute contracts for reasons of satisfying our duties, not violating them,” he stated.

Hon. Milton Muwuma (NRM, Kugulu South) was not amused by Cabinet’s purported negligence in ensuring the conditions of the deal are not friendly to Uganda.
“Couldn’t we raise a red flag [against the adverse conditions of the deal]; what was the function of Cabinet? Why weren’t they able to detect such anomalies?” he replied.

Hon. Emmanuel Ongiertho (FDC, Jie County) claimed the government bargained badly, and that the contract conditions could have been better.

“Not long ago, everybody was saying the airport would be taken over by Chinese, but from the report, you could see [why there were those speculations] because if the agreement for the loan kind of gave Uganda to the hands of the Chinese, then it is right that the airport [can be speculated to] belong to the Chinese,” he said.

Ssenyonyi claimed Uganda had lost sovereignty to China as a result of the terms of the deal, which included putting UCAA’s money in an escrow account in China and having the contract arbitrated by Chinese laws.

“We’re talking about a sovereign nation; this company [UCAA] has its earnings, and it can’t spend any of them unless it gets permission [from China]; the third is the imposition of Chinese legal jurisdiction [in contract arbitration],” he explained.

But Government Chief Whip, Hon. Thomas Tayebwa said the deals, for which the government is being criticized, had their conditions cleared by the House via a report from the Committee on National Economy in 2015. 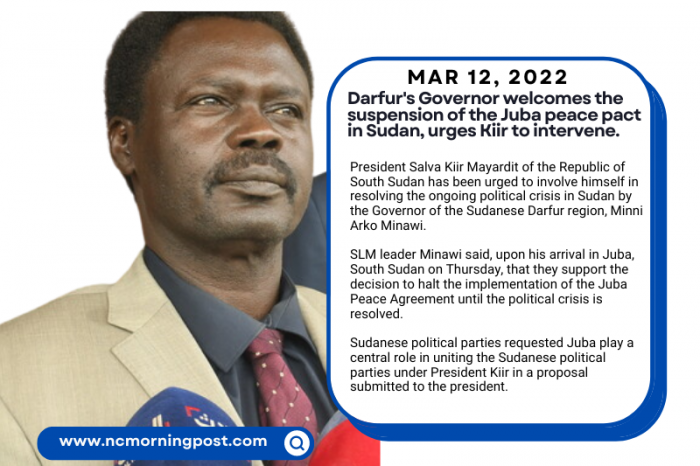 Darfur's Governor welcomes the suspension of the Juba peace pact in Sudan, urges Kiir to intervene. 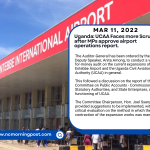