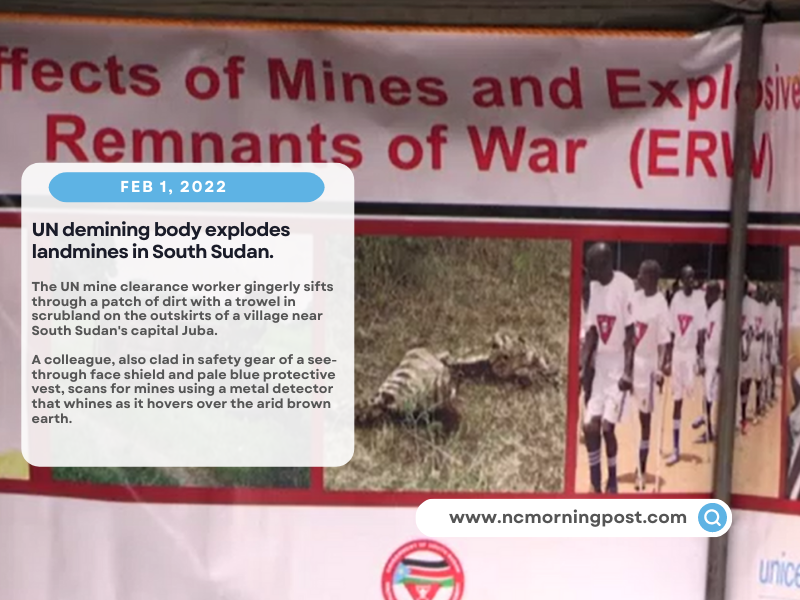 The UN mine clearance worker gingerly sifts through a patch of dirt with a trowel in scrubland on the outskirts of a village near South Sudan’s capital Juba.

A colleague, also clad in safety gear of a see-through face shield and pale blue protective vest, scans for mines using a metal detector that whines as it hovers over the arid brown earth.

Nearby, there is a loud boom, the sound of a controlled blast that sends a plume of black smoke into the sky.

After decades of conflict in the world’s youngest country, landmines and unexploded bombs still litter vast tracts of South Sudan’s landscape, threatening the lives and livelihoods of its residents.

In the village of Gondokoro, just a few kilometres (miles) from Juba, staff from the UN Mine Action Service (UNMAS) are working to remove the deadly detritus of war.

According to UNMAS figures as of last year, a total of 1,404 people have been killed by landmines in recent years, including more than 250 children, and 3,730 have been maimed.

“Since mines have been identified in our area, we are now scared of going into the bush for daily work,” says Gondokoro resident John Edward, who hunts for wood to make charcoal.

“We are here only with God’s help.”

In Gondokoro, one “contamination” zone has been sealed off with tape linked by fenceposts bearing red and white signs with a skull and crossbones warning “Danger!! Mines!!”

More than 18 square kilometres (seven square miles or the equivalent of about 2,570 football pitches) still needs to be cleared in South Sudan, UNMAS says on its website, without detailing the potential number of devices.

It’s a task it says it hopes can be achieved in five years — depending on safety and funding.

“These dangerous items, these mines and explosive remnants of war and conflict pose a real threat to the people of South Sudan,” says Fran O’Grady, the head of the Mine Action Programme.

“Clearing them is about lives and livelihoods, it’s about ensuring that the girls, boys, women and men across the country can take safe steps on safe ground free from the threat of explosive hazards.”

It has destroyed 39,920 mines, 76,010 cluster munitions and 972,354 other items of unexploded ordnance, and made safe thousands of schools, water points and health clinics, its website says.

The weapons are a brutal legacy of decades of war — the long fight for statehood from Sudan, and the civil war that erupted just two years after the country declared independence in 2011.

A fragile 2018 peace agreement to end the bloodshed between forces loyal to President Salva Kiir and his deputy and historic foe, Riek Machar, is largely holding.

But complicating the UN’s clearance efforts, the remaining “contamination” zones are in the south, where the rebel National Salvation Front (NAS) — which did not sign up to the peace deal — operates and insecurity remains a serious problem. 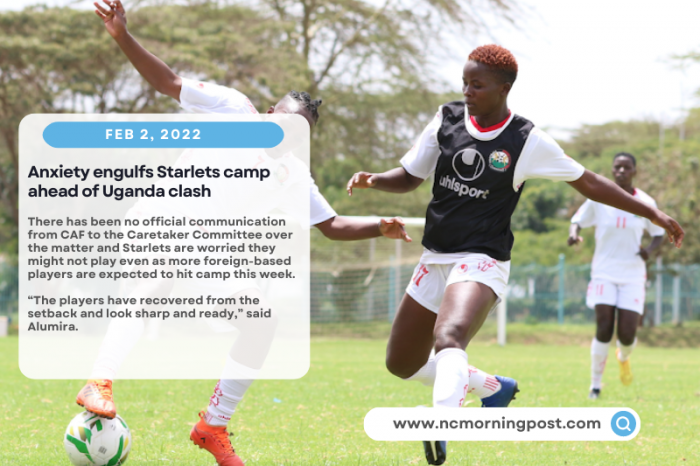 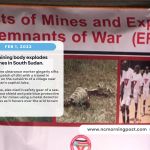