In a decree seen by NCMP, the minister of Local Gov’t and Law Enforcement , Lt. Gen. Gathoth Gatkuoth Hothnyang in Upper Nile dissolved multi- traditional authority and ordered chiefs to dollars for the traditional levels.

According to his decree, all paramount chiefs and their local administrations are will be dissolved in 100 days but each of the Chiefs must pay an amount in US Dollar that ranges from $400 US Dollar per head chief to $800 for paramount chief which in local current would be equivalent to roughly 4 to 8 cows.

The decree reads “Following the formation of revitalized state government of UNS after one year. Reference to the above mentioned subject, as you all knew that former 32 defunct states and SPLM -10 liberated areas has created more counties, Payams that produced many Paramount chiefs, head chiefs and sub chiefs.

The decree continues “Therefore, I as a Minister of local government and law enforcement do here by issuing orders for the dissolution of all paramount chiefs, head chiefs and sub chiefs after 100 days in your office. The committee for election from the ministry of local government and law enforcement will come to your end after 100 days from the signature of these orders.”

Hon. Gathoth Gatkuoth’s men will be collecting what he describes as “fees” but it is not clear whether the money will be paid by the current local administrators or by the candidates who may express interest in running for the new positions.

“The fees for election per traditional level shall be: paramount chief – 800 USD, Head chief = 500 USD and Sub chief = 400 USD. This for your directive” reads part of the decree.

Considering the fact that 800 USD is like 8 cows in remote areas of Upper Nile. Why will the chiefs be charged for a service they perform to maintain law and order without much rewards?

If such system is allowed then Upper Nile will have chiefs with money but not chiefs with ideas and those who can deliver as required by local government act. 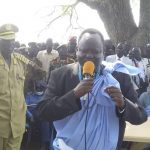