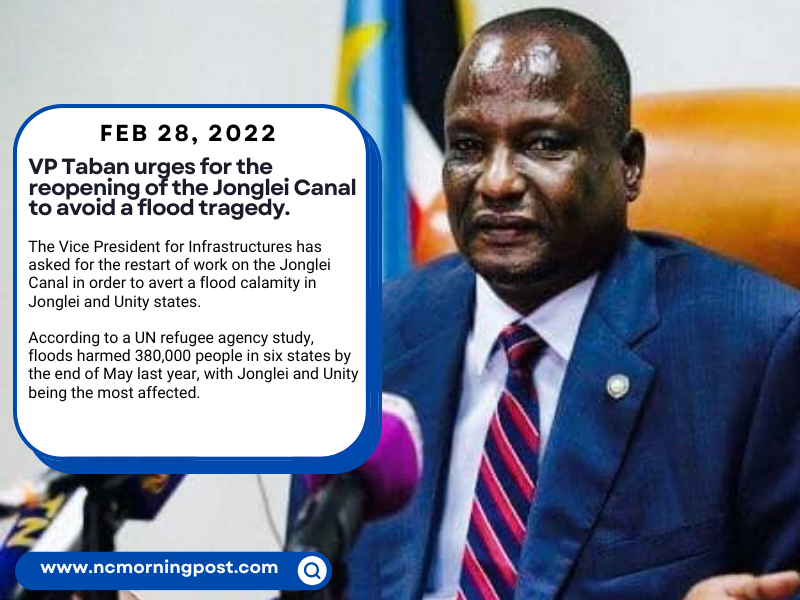 The Vice President for Infrastructures has asked for the restart of work on the Jonglei Canal in order to avert a flood calamity in Jonglei and Unity states.

According to a UN refugee agency study, floods harmed 380,000 people in six states by the end of May last year, with Jonglei and Unity being the most affected.

According to General Taban Deng Gai, the deadly floods in Bentiu, Fangak, and Bor towns were caused by a large amount of water purportedly released from Lake Victoria by Ugandan authorities.
He believes that rivers should be opened to avert displacement caused by floods by restarting the digging of the Jonglei Canal.

This, according to Deng, will assist speed up the flow of Nile water to Egypt.
However, he stressed that the restart of Jonglei Canal work should be done on South Sudanese terms, not in Egyptian interest.

On Sunday, the Vice President addressed at the opening of the famed musician Bangich Reat Foundation in Juba.
“We, the residents of Bentiu and Fangak, don’t have somewhere to remain.” “We may relocate to Eastern Nuer [the eastern bank of the White Nile] since we have lost our land due to floods,” Vice President Deng told a gathering in Juba on Sunday.

“People are wondering who unleashed this massive amount of water since we haven’t seen anything like that in decades.” Of fact, Uganda and Kenya opened the floodgates since Kampala was almost drowned due to Lake Victoria’s growing level.

“The excavation of the Jonglei Canal, which was halted, has to be restarted, but on our terms, not on Egyptian interests.” We must investigate it and ensure that it is acceptable to all South Sudanese.

“Let this water flow to people in Egypt who need it so that our country is not drowned by flood.”
This is the first time a senior government official has made the resumption of Jonglei Canal digging public.

Egypt explored the Jonglei canal proposal for the first time in 1946, and designs were developed between 1954 and 1959.
The project’s goal was to divert water from South Sudan’s extensive Sudd wetlands in order to send more water downstream to Sudan and Egypt for agricultural use.

The canal’s construction started in 1978, but the emergence of political turmoil in Sudan slowed progress for several years.
By 1984, when the SPLA halted construction, 240 kilometers of the canal’s original length of 360 kilometers had been dug.

South Sudan’s independence in 2011 essentially terminated the Sudanese government’s participation in the canal. 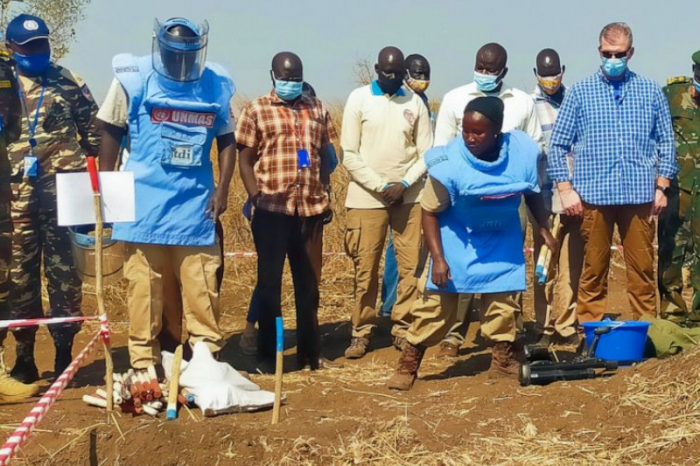 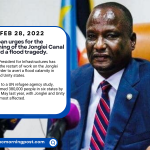