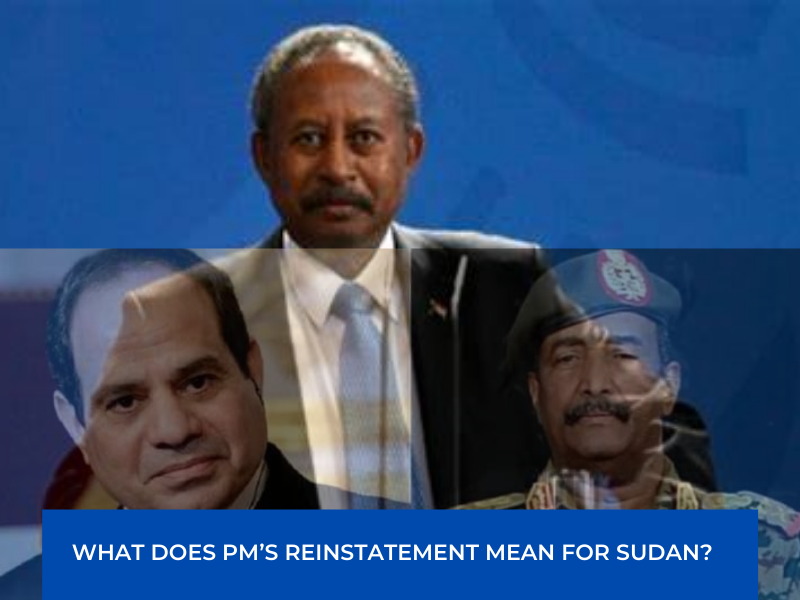 The return of Sudan’s prime minister after weeks under house arrest was the largest concession made by the military since its Oct. 25 coup, but it left the country’s transition to democracy stuck in turmoil.

After having openly supported General Abdel Fattah Al-Burhan’s coup on 25 October, Egypt and the United Arab Emirates are attempting to get it acknowledged by the international community. In Sudan itself, they exerted pressure on former prime minister Abdallah Hamdok to return to his job.

The military secured an agreement with Abdalla Hamdok on Sunday that would restore him as the head of a new technocratic Cabinet ahead of future elections. But the arrangement has upset Sudan’s pro-democracy movement, which accuses Hamdok of letting himself act as a fig leaf for ongoing military control.

Most of the international community has criticized the coup and advocated for the restoration of at least partial civilian administration. The United States withheld help from the cash-strapped nation as it slowly emerges from decades of isolation under President Omar al-Bashir, who was deposed during large demonstrations in 2019.

The Forces for the Declaration of Freedom and Change, an umbrella group of Sudanese political parties and pro-democracy groups, has rejected the pact and says it remains dedicated to removing military rule.

But the military is leery of transferring control to civilians, which might leave senior brass exposed to punishment for human rights breaches stretching back decades, or reduce the generals’ hold over profitable areas of the economy.

WHY DID SUDAN’S MILITARY REINSTATE THE PRIME MINISTER?

The military needed to do something.

Gen. Abdel-Fattah Burhan has been under rising criticism since assuming complete authority on Oct. 25. Western, Arab and African governments have urged for restoration to civilian governance, and the U.S. withheld $700 million in funding as it harshly criticized the coup.

Protesters have filled the streets in the greatest rallies since those that ousted al-Bashir’s three-decade rule in 2019, and security forces have killed more than 40 protestors since the coup.

The generals have characterized the restoration of Hamdok as a step toward stabilizing the country ahead of elections set for July 2023, and the international community has cautiously welcomed the accord. Sudan’s pro-democracy movement has vehemently denounced the accord as legitimizing the coup and has promised to maintain conducting major rallies.

DOES THE REINSTATEMENT OF SUDAN’S PRIME MINISTER REVERSE THE COUP?

The military maintains ultimate authority, and by prescribing a technocratic Cabinet, the deal further sidelines Sudan’s political parties and the pro-democracy protest movement.

“I don’t think it’s feasible for Hamdok’s administration to operate at all, since it doesn’t have recognition on the streets,” said Jihad Mashamoun, a Sudanese scholar and political commentator.

The Sudanese Professionals Association, which organized the rallies against el-Bashir, criticized the current accord as an effort to legitimize the coup. The local Resistance Committees, which have also played a prominent part in recent rallies, are asking that the military abandon politics completely.

The military believes there will be no return to the power-sharing government that existed before Oct. 25, which was riven by internal disputes. The coup happened weeks before the military was intended to hand over authority to a civilian.

Nafisa Hajar, a human rights lawyer and deputy head of the Sudanese Darfur Bar Association, says that as much as the installation of Hamdok under military oversight goes contrary to the demands of the protest movement, she believes that the generals’ use of force against demonstrators left the deposed premier little choice.

“This compromise has now become the established quo,” she remarked.

WHAT DOES THE SUDANESE MILITARY WANT?

At the very least, it seeks to defend itself.

An elected administration would undoubtedly attempt to prosecute generals for human rights breaches, including those perpetrated during al-Bashir’s scorched-earth assaults against rebels in Darfur – for which the international criminal court accused him with genocide. They might possibly face accusations for the murders of demonstrators in recent years.

The military also fears losing its influence on mining and other critical economic sectors.

“Hamdok is in risk of becoming the guy at the till in the grocery store selling soap, matches and snacks, while the drug traffickers in the back room conduct the actual deals,” said Alex de Waal, a specialist on Sudan at Tufts University. “The revolution was orchestrated to shield the kleptocrats from the cleaning, and the army obviously intended the new formula to be a return to the money-laundering operation with a more respectable face.”

WHERE DOES THE INTERNATIONAL COMMUNITY STAND ON SUDAN?

The coup was highly ridiculed globally, but the generals had significant allies.

The United Arab Emirates, Saudi Arabia and Egypt have built tight connections with Burhan since the rebellion against al-Bashir and undoubtedly consider the generals as the greatest prospect of keeping a stable, favorable administration in Khartoum.

The affluent Gulf monarchies consider them as a bulwark against the influence of competitors like Turkey and Qatar. Egypt is looking for Sudan’s backing in its long-running conflict with Ethiopia over the building of a major upstream dam on the Nile.

Israel is also considered as a possible friend of the generals, who were the leading force behind Sudan mending ties with it last year in return for removal off the U.S. list of state sponsors of terrorism. Hamdok had raised reservations ahead of the normalization deal, part of the so-called “Abraham Accords,” saying a foreign policy move of that significance should only be approved by an elected administration.

Israel’s Walla news website stated that an Israeli team met with Sudan’s generals days after the coup. The Israeli government has not commented on the coup or its aftermath.

“The U.S. and its allies wanted a collaboration, but the people don’t want a partnership at all, they want complete civilian rule,” Mashamoun added. “The international community ought to heed to the people’s demands.”

U.S. State Department spokesman Ned Price said Monday that the restoration of Hamdok is a vital first step, but hinted the generals will need to do more before U.S. assistance can be unfrozen.

IS THERE ANY HOPE FOR SUDAN’S DEMOCRATIC TRANSITION?

There seem to be two roads to democracy, both of them difficult.

Hamdok may engage with the generals to clear the ground for elections, perhaps utilizing his position and foreign assistance to get the political transition back on track. But it likely implies a return to the tug-of-war of the previous two years, which soured both sides.

The pro-democracy movement has pledged to keep up the street demonstrations until the military passes over authority to civilians. But the generals have a lot to lose, and a protracted stalemate might incite widespread upheaval.

“The upshot may be democracy, but more likely it would be state disintegration. So a compromise is needed,” de Waal added. The compromise restoring Hamdok “isn’t a very good one, but there may be ways to improve upon it.”

Hajar, the lawyer, also envisages two outcomes. In one, if the generals keep loyal to their vows, it might gradually lead the nation towards an elected administration. The other leads to increased instability.

“If the major goal of the agreement between Hamdok and Burhan is making the military appear more acceptable in front of the world community, then the streets will not be calm and there will be further protests,” she stated. 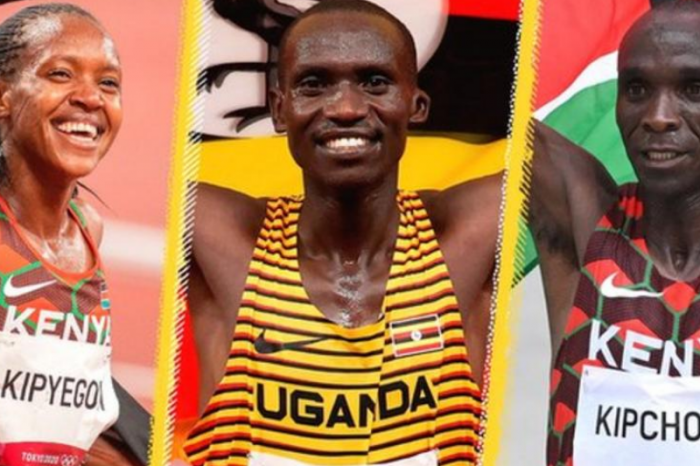 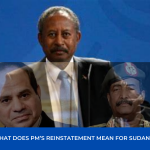